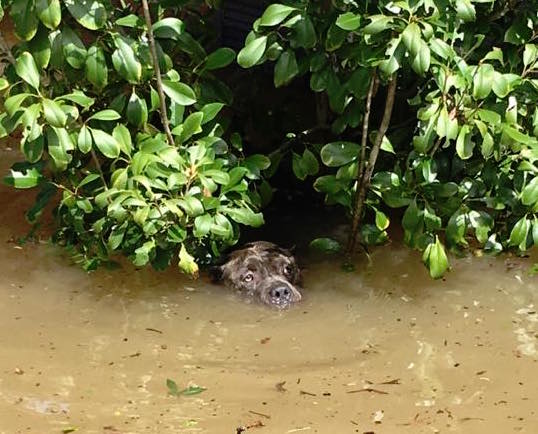 Deadly flash flooding in the US state of Louisiana has destroyed 40,000 homes this week, and leading many families to flee. So far, 11 people have been killed. Baton Rouge has been one of the worst hit areas, where kind-hearted individual Josh Pettit has joined in with the rescue effort to help those stranded on rooftops and cars. But it’s not just people he has been helping; when Josh was confronted with the shocking sight above, he knew this dog was inches from death.

“Baton Rouge got flash floods this morning, going from dry land to 8ft of water in people’s houses within two hours!” Josh posted on Facebook alongside the photograph.

“Out the corner of my eyes I saw a bush shaking! This is all I saw! Eyes and nose barely above water. She could barely tread water anymore, she was so worn out and had the saddest eyes I ever seen – so scared for her life!

“We saved her and she came laid her head on my lap and cried and moaned like a big baby! She was thanking me. I thank God for letting me notice her. We then rescued a vet and his animals and she went with them to dry land.”

Josh was even able to locate the dog’s owner. The dog is called Sadie, and was lost when her owner was loading his other dog into the car to evacuate, and Sadie got scared and ran off. She was so happy to be reunited with her family.