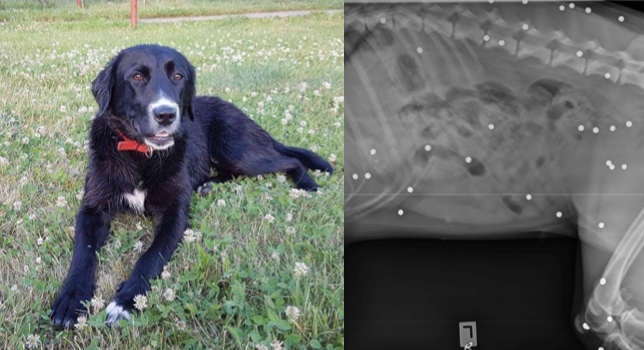 When Jana Hojstričová Bojkovská adopted gorgeous Arsi from a local shelter in her native Slovakia, Arsi seemed like an ordinary, happy dog. Arsi wasn’t showing signs of distress; she settled well with Jana’s other dog, a Rhodesian Ridgeback named Ramon, and her cat, Mimi.

However, when Jana took Arsi to the vet for the first time, she was in for a real shock. The vet soon realised that Arsi had been used for target practice by her previous owner, and the dog was still carrying the rifle shots in her body from the abuse she had suffered. They needed to be removed too, given the toxicity of the lead. X-rays were done to show the vet where to find the shots, and it was discovered that Arsi was absolutely riddled with them.

Arsi had been shot more than 90 times, and now awaits a costly operation to preserve her future health. But at least she has finally found a safe and loving home with Jana and her family.

“She thinks that she has to protect us against every dog and person. She loves walks and swimming in the lake,” says Jana. “It’s like she wants like to tell us ‘I will do anything, but please keep me.'”

Jana is trying to press charges against Arsi’s abuser, and also petition the Slovakian government to recognise abuse against animals as a more serious crime, so that offenders can be properly penalised for their cruelty.

“This is one of the last countries in the European Union in which an animal is still defined only as a thing,” says Jana. “Therefore not even adequately protecting animals and stopping instances of torture – we are not punishing them like they do other countries.”