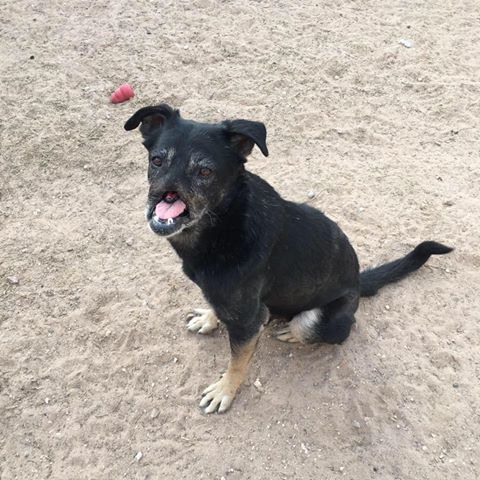 This street stray was found hiding under a car in the Egyptian capital of Cairo when he was taken in by kind strangers. It was incredible that he was even still alive; someone had hacked off his nose and much of his upper muzzle with some sort of blade and left him to die. He had probably served as a guard dog – and paid a horrible price. His rescuers called him Anubis, after the ancient Egyptian god of the afterlife, who has the head of beautiful black dog.

Anubis was cared for initially by the Animal Protection Foundation, with US-based group Snarr (Special Needs Animal Rescue and Rehabilitation) co-ordinating the money and effort needed to get him out of Egypt forever. Anubis started his rehabilitation with a family in El Paso, in California, where he shared his home with four other dogs and some cats, which he loved!

Unfortunately, Anubis started to clash a little with the other bigger male dogs in the household, so it was decided a new home, where he could be more comfortable, should be found. Kelly Hutson, from Texas, had read Anubis’s story online, and knew she could help.

Anubis soon made the ten-hour car journey from California to meet Kelly earlier this week, and it was clear she had made the right choice.

“He’s a people dog, which is incredible after a human brutalized him in such a manner,” Kelly told the New York Daily News.

“But he doesn’t really have any major health problems we’re aware of. He breathes fine, he eats fine, it’s amazing.”

“This is the sweetest, most loving creature you’ll ever meet.”