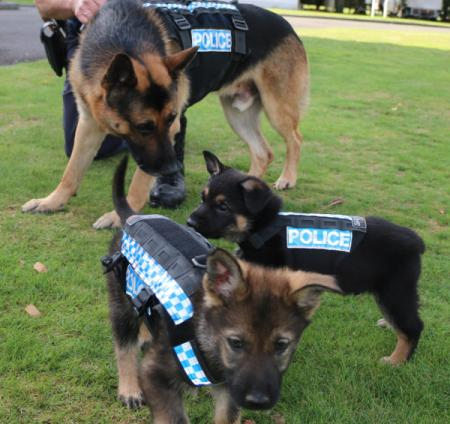 New Zealand’s police dogs are set for better protection after a drive for purpose-made stab vests yielded results. In an adorable video posted by the country’s police force, patrol dog Ike models the ‘Mako’ harness, which has layers of polymer panels to protect from stabbing and slashing. The vest will also stand up against physical blows – a common threat from suspects pursued by police dogs.

But best of all, the vests in no way impede the dog’s ability to move freely and quickly, because, as Wellington Dog Section head Senior Sergeant Mark Davidson says, “A dog’s greatest protection is its speed and agility.” Look at Ike go!

The vest has now been trialled on eight working dogs across three of New Zealand’s cities: Auckland, Wellington and Christchurch. A full roll-out is due in July, with 130 police dogs expected to benefit. What an incredible way to safeguard these incredible animals on the job – and the future generation of them. Future patrol dogs Kuba and Loki tried out mini versions!

“We don’t use them as cannon fodder – and it’s important to remember that standing immediately behind every dog is its handler.”

Let’s hope one day police dogs around the world are all afforded this level of protection – they really deserve it after all.

Watch the full video below!