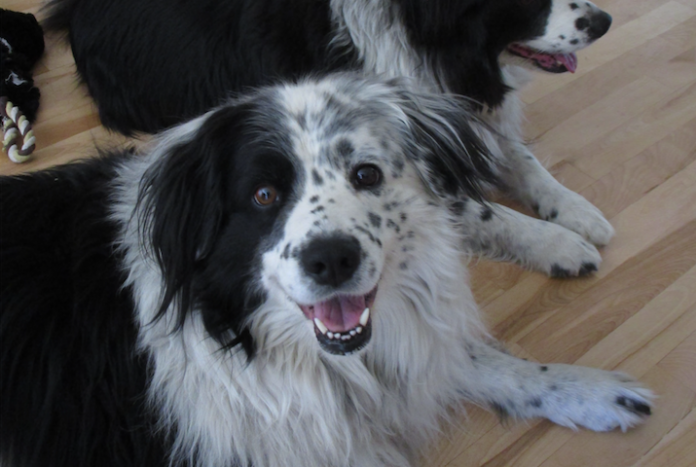 I stare in disbelief at the emergency vet doctor trying, but still unable, to absorb the awful news. Our beloved Rascal, the smiling black and white Border Collie that we walk regularly, has a bleeding tumour on his spleen. He has a few months to live at most.

Of the two Border Collie brothers, Rascal and Samson, Rascal seemed the more fragile and delicate. It was only a few weeks ago he was running in the fields at Nose Hill Park here in Calgary, calling out to Samson with a bark to come check something out. They were both so full of joy at being in nature. That day at the park they kept spotting white-tailed deer and then barking and running ahead of us for a better view.

I think about these memories as I stare at the emergency vet in disbelief and horror, no longer hearing the words coming from her mouth. Life without Rascal is too hard to contemplate.

Rascal joins his brother, Samson, back in the vet’s waiting room as we prepare to leave. Rascal seems a bit more energetic than on the way here, as if relieved his vet appointment is over. C, my husband, wraps Rascal in a flannel blanket to protect him against the blustery freezing cold Alberta morning and he carries him to the car. I sit in the back of the car and C gently hands Rascal to me.

“February is the cruelest month,” my husband says. I agree with him about that.

Rascal, as usual, settles down on my lap. From there he can get a view of his favourite human buddy, my husband, driving and also glimpse now and then out of the window in case anything interesting is happening out there. This is the routine when we go home with them. Rascal sits on my lap and Samson settles beside me in the back seat.

We stay in the vet parking lot warming the car up.

“February is the cruelest month,” my husband says. I agree with him about that. We’ve had bad luck in February.

I cuddle up with Rascal and Samson in the back seat. Their beautiful double-coated black and white fur is helping me stay warm. They are nine years old now. My husband starts crying as he drives. I stroke the soft, white fur on the top of Rascal’s head as he settles even more on my lap.

Pet grief is pure grief. There are no words for it

“Rascal, I miss you already,” my husband says, pulling out of the parking lot.

I notice as we are leaving that there’s a family bringing a cat into the vet clinic. The girl holding the cat is weeping. The entire family is crying with her. Pet love is pure love, not complicated the way human love is. Pet grief is pure grief. There are no words for it.

We turn left and soon pass Nose Hill Park where we were just last week. Rascal rallies and looks out the window on my right. Maybe he’s thinking we’re going to stop. He’s our scout who goes ahead of us. He’s the dog who goes wide to find great and interesting things to sniff for his brother. He’s the one who can go off leash because he always, and unfailingly, comes back when called.

I think about how we’ll need Samson more than ever now.

Samson licks Rascal’s face. This is unusual. Normally, it’s Rascal licking Samson’s face. Normally, it’s Rascal doing the comforting. Samson must know something is wrong. I worry he’ll be lost without his brother, that Samson won’t be able to recover from this loss. They complement each other perfectly. Rascal seems content to continue resting on my lap and to settle his head on my right arm. Samson rests on my left arm.

I think about how we’ll need Samson more than ever now.

Rascal looks up and I notice the cute freckles on his face. Once back at their house, C. parks the car and opens the back door. He gently lifts Rascal. He’s still swaddled in the flannel vet blanket. He carries Rascal inside for a rest. C. takes Samson on a short walk. He touches his paws on the snowy concrete and then immediately lifts it. What a viciously, unforgiving day. Even Samson, with his double-coated fur, is feeling it. After, he joins his brother, contentedly, inside for a rest.

We all agree, as shattering as it is, it’s best not to do the chemo, and not to prolong the inevitable

I go downstairs and spend time with Rascal and Samson in their doggy apartment. I’m raw and spent over this rough day. Their owner and mother, J, a doctor, sits with us and we talk about Rascal. She explains the chemo treatment the vet is offering will only delay the inevitable. She, too, is crying as we discuss Rascal. We talk about his quality of life and the importance of Rascal enjoying his final days as much as possible. We all agree, as shattering as it is, it’s best not to do the chemo, and not to prolong the inevitable.

I phone a good friend later that night explaining the situation and asking how she got through the illness and death of her beloved German Shephard, Jasper. Over the next week, as Rascal rallies around a bit but then gets even sicker by mid-week, I continue to reflect on the dogs and our journey with them. It all began when we got up the nerve to ask the owner, J, if we could walk them. 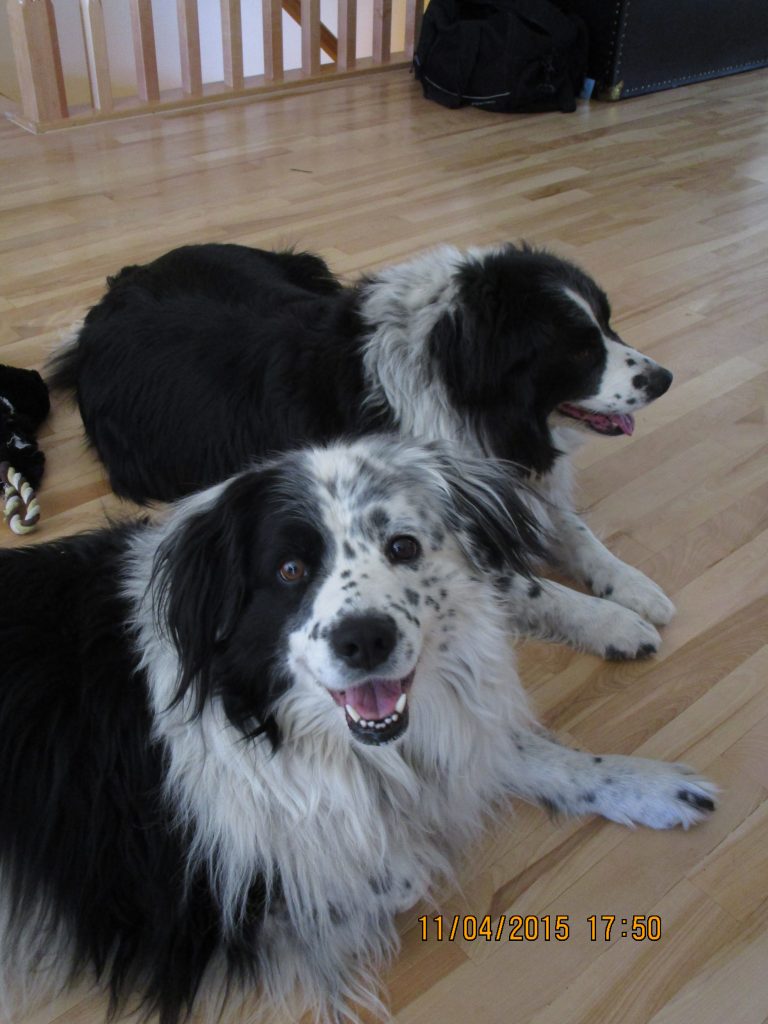 She works at a busy medical clinic so liked the idea of getting a helping hand with the dogs’ exercise and walking routine. And so it began from there, over eight years ago. Really, they were our first friends in this new city. They became an enormous part of our lives, especially on the weekends. We were a team exploring all the parks, streams, and woods surrounding Calgary. It benefited all four of us.

When we first started walking them, they were quite unruly, pulling every which way. Soon, though, we got into an organized routine. They came out, drank water from a bowl we had for them, sat down to get their harnesses on, and then hello treats and…out the door for the most fun time ever. They’d get biscuits as the walks continued as rewards and they quickly learned commands.

Gradually, they came out calmly and with a certain military precision, as if to say, “Oh yeah! You’re here for our regularly scheduled walk. We know what to do.” My friend, Maria, texted me a follow-up asking how Rascal is doing. “I’m at a place where I’m so grateful for all those years with Jasper and that I had him in my life for so long. What a gift that was!” she texted.

I know one day I’ll get there too, to that grateful feeling, but right now I don’t feel that way. I just feel desperate not to lose Rascal. I want him back to how he was, happy and scouting ahead for us, and I’d do anything to make it okay…would do anything not to face this.

Rascal dies a few days after that text and exactly a week after the emergency vet clinic visit. He was still happy and in a good mood until near the end, still game for very short walks out front, even though my husband had to lift him for most of the way. Although obviously unwell and struggling, he seemed to enjoy the walk and the love and attention.

As I walk with Samson, I ponder all the other walks we’ve had. I think about all those hours of dog walks and exploring with them through parks, forests, streams, mountains, rivers, lakes, city walks, suburban walks, country walks. These are some of the most joyful and relaxing times of my life that no amount of money can buy.

Rascal is gone, but not forgotten. No, never forgotten

The thing about being out on these long dog walks is that life’s problems are forgotten if only for a time. They are forgotten and on hold while watching and exploring with them among the flowers and weeds. This is the gift that being with dogs gives us… the gift of being in the moment. And what a gift that is to be somewhere and not want to be anywhere else.

I think about one afternoon last winter wearing a down vest and being in the valley with the snow softly falling. Rascal was energetic, scouting wide for his brother and then giving his usual, “Come check this out,” single but forceful bark. At the time, I was even aware of how special and perfect that moment was. I wanted so desperately to hold on to that afternoon, that moment, forever.

After Rascal died, we put a photo of him and Samson out in nature on our bedroom bureau. Rascal is smiling for the camera in all his happy beauty with his white lion’s mane and Samson is directly behind him, looking tentative, not quite as friendly, a bit more guarded. We still walk Samson regularly and see he’s grieving the loss of his brother. We continue to explore hills, valleys, and river paths. We continue to grieve Rascal in different ways.

But what my friend said about her German Shephard, Jasper, applies to our beloved Rascal and to so many pets who have died: Rascal is gone, but not forgotten. No, never forgotten.