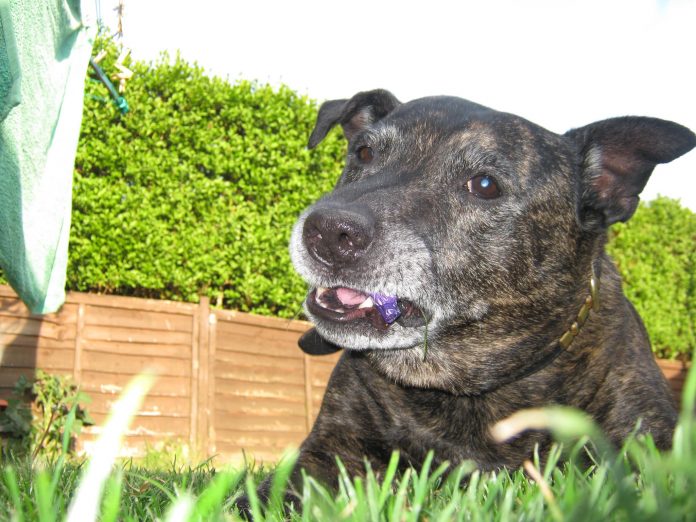 Our first dog was a Staffy cross from our local rescue centre. He was dark brindle and looked so sad in the kennel. He lent up against the wall with a look of despair, barely bothered to make eye contact. He was the only male amongst six other excitable jumpy female Staffies, separately caged. I asked the kennel worker what was wrong with the male dog, called Kane.

She told me that he had been here longer than any other dog and people bypass him because of his colour, people are often scared of dark coloured dogs and nobody has had any interest in him. That was all I needed to know. Thirty minutes later, after a walk around with him, I was signing the papers to take him home. My husband thought I was going to come back with a Yorkie or a small dog that day, so when he came home from work, he was greeted by a staffy cross running down the stairs at him and barking. I told Kane to settle down and showed him that this was his new dad. They bonded pretty quickly.

It took a long time for Kane to settle into the house. It was more than a year before he stopped pooing and peeing in the house. It was a daily occurrence, which became depressing. We didn’t know what to do. We tried everything. More walks, coming home at lunchtime from work, hiding toys with treats in so he didn’t get bored in the day, we kept the tv on for some background noise. We bought all kinds of sprays and products for around the house to put him off of relieving himself. You name, it we tried it. 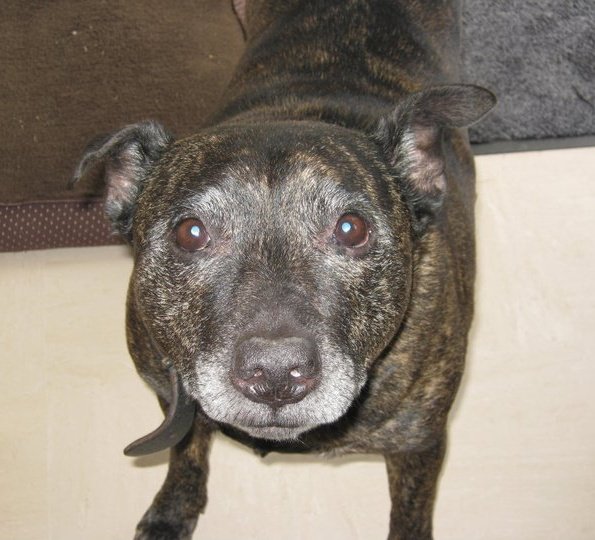 Then one night we watched a dog programme. The vet on the show said that Staffies hate being ignored and by giving the dog the cold shoulder, undesirable behaviour can change. So we tried. Whenever he used the house as a toilet, he got zero attention from us. It took about six weeks, but it finally worked. We were so happy. It was great to come home and not have an almighty poop in the hallway to clean up or have to put the washing on again because he’s peed up the washing basket. Life was good! Kane was such a gentle lad, and he loved being cradled like a baby while he slept on my lap.

Over the next ten years, two house moves, two ferrets, two guinea pigs and three children later, Kane was an old grey boy. He was great with the kids. He would always allow them to play fetch with him and dropped the ball for them to throw without being asked. Unlike when we tried to play with him! He wanted to place chase and tug of war. He would always win. He was 14 when he passed away, we were heartbroken. I said I would never have another dog because it was just too crushing. I still cry over him now. I tell the children he has gone back to the stars, and their Grandad looks after him. Seven years have passed since he died and I still say happy birthday to him every September 23rd.

Then, five years ago, my husband and I went to a dog rescue centre with my Mum. She wanted to see a Bull Mastiff that the centre had advertised for adoption on their website. She wanted us to go with her so that my husband could drive back if she adopted the dog. That way, my Mum could sit in the back with the dog for the journey home. As it turned out, the Bull Mastiff was too large for her, much more than he looked in his pictures. So she came away with no dog. During our time there we had a fuss with a six-month-old black and white Staffy cross. She was so excitable, jumping everywhere and licking us. The rescue centre named her, Lilly. She was so sweet. But we all left with no dogs. 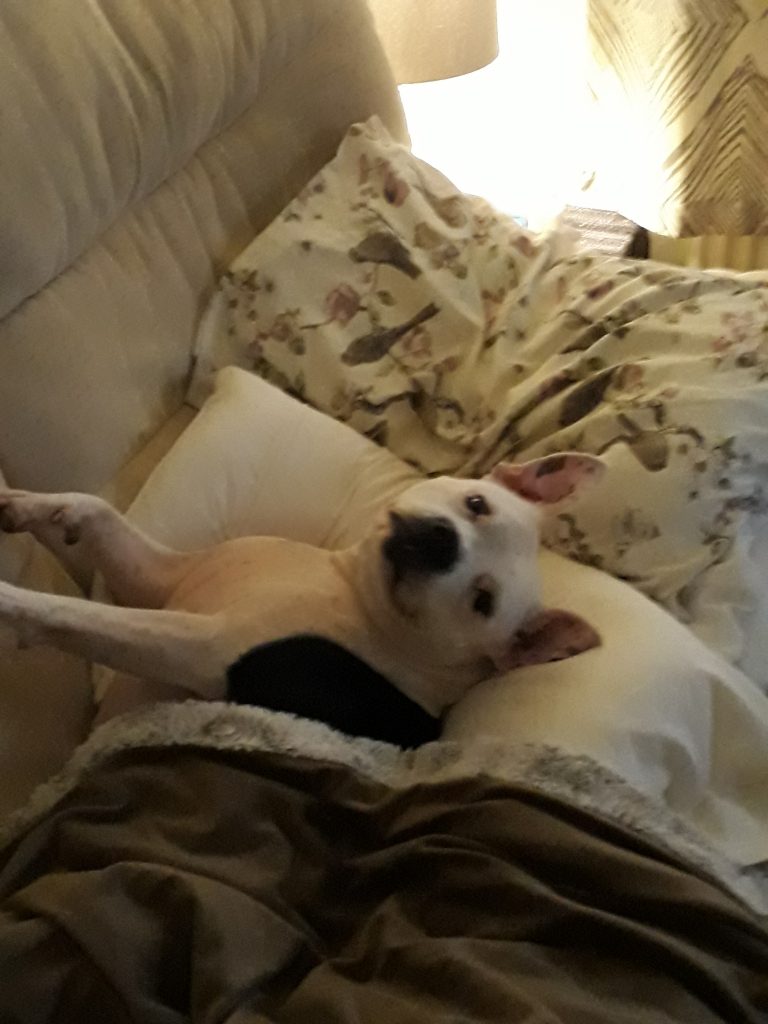 Later that day, my husband was unusually quiet. I looked at him and said, “You’re thinking about Lilly, aren’t you?”. He looked at me with a grin. “Maybe” he replied. “Well, it’s your call. I came home with Kane, so Lilly is your choice, and to be honest, I’m thinking about her too”.

The next day we went back to the rescue centre and adopted her. We took our son along with us. He thought we were off to the shop to get sweets, so when we pulled up at the rescue kennels, he was so excited. We hadn’t told our older daughters about adopting Lilly at this point. They were at a town festival with their Nan at the time. We met them in town with Lilly. They were beaming with joy when they saw her. We were all so happy.

Just like Kane, Lilly took a long time to settle in. She was great with the children, just like Kane was. However, she was very rough with my husband and I. Jumping at us trying to butt heads and running into me and knocking me over. We tried all sorts of things. We became stressed and unhappy. We wanted it to work out, but Lilly’s behaviour was getting worse. It came to the point where I didn’t want her around me. We decided to give her one last week. At this point, she had been with us for six months. So it wasn’t an easy decision to give up on her. I remembered how Kane changed his behaviour when we ignored him, so for that whole week, apart from feeding and toilet time, I had to turn my back on Lilly, which made me feel horrible. 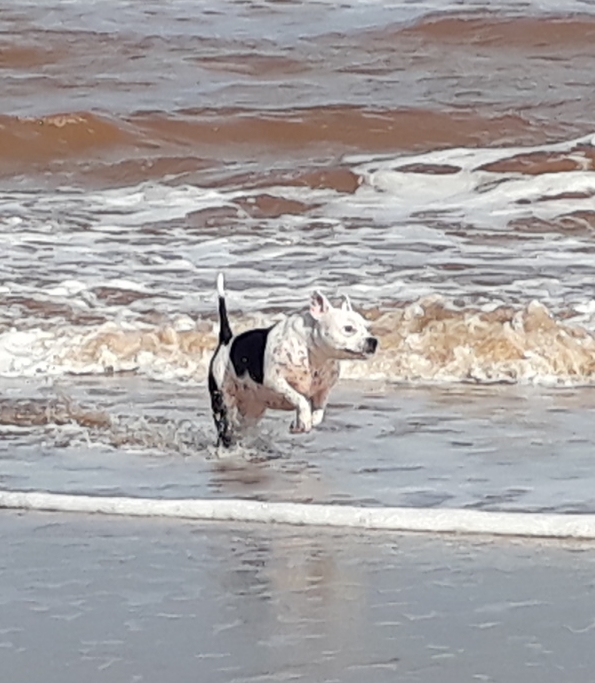 I don’t know how she knew or how it worked so quickly, but it did. By the end of her ‘last chance’, she completely stopped all the rowdy behaviour. She calmed right down and listened to commands. We were so happy that we could keep her. It was a huge relief. Since that point, Lilly has come on leaps and bounds. She loves running, jumping and climbing. Lilly’s a real adventure dog. She loves her blankets and belly rubs, and just like Kane, she has crazy moments running around the house. We call this ‘the zoomies’.

I am so thankful that things turned around for the better, and we had a happy ending with her. I think having a dog makes a home and Lilly loves us. She’s right where she belongs. If we have more dogs in the future, they will always be rescue dogs, and if I’ve learnt anything from our experience with Staffy rescues, it’s that they need a lot of time to settle, but they get there in the end. If you’re experiencing similar issues, maybe try the cold shoulder method? Stay patient and keep trying, you’ll be glad you did.