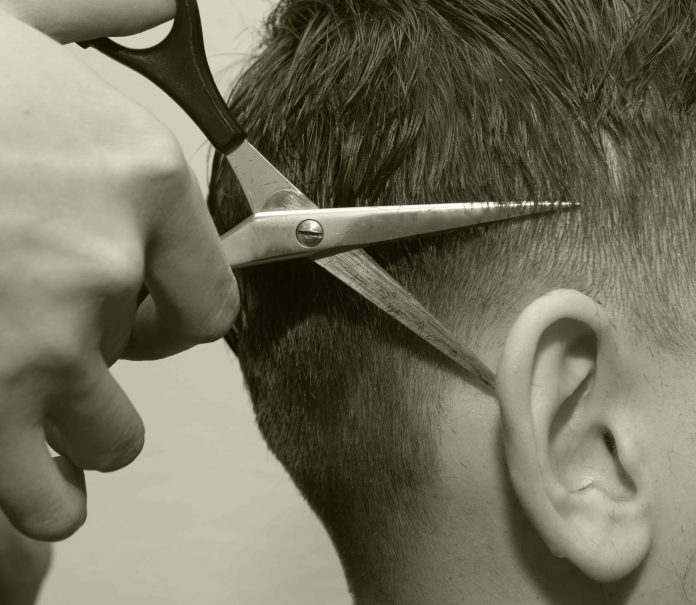 When dog trainer Jordan Shelley spotted an advert for a UK pet food company, he was taken aback to see it depicted a dog with cropped ears – a practice that has been illegal since 1899. Now he’s campaigning to end the import of cropped dogs to the UK and stop their use in advertising…

“The funniest part about this,” Jordan says, “is that I probably wouldn’t have given the matter a second thought if I hadn’t received a letter threatening legal action. After seeing a cropped dog in an advert for a UK pet food company, I felt I had to speak out – there is a reason why cropping the ears of dogs is illegal here. It shouldn’t be normalised.” 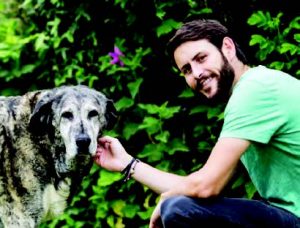 At first, he says, the exchange was civil and even friendly; after he got in touch, it was Jordan’s understanding that the company had seen his point and decided not to use cropped dogs in advertising going forward. Believing the exchange to have been constructive, Jordan was ready to put the matter behind him. 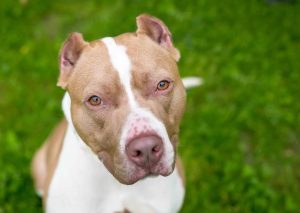 However, a few days later, Jordan received a letter from the company’s lawyer, threatening legal action for defamation. He was surprised and, far from intimidated, he decided to start campaigning on two fronts: to make the importation of cropped dogs illegal, and against the use of these dogs in UK advertising. 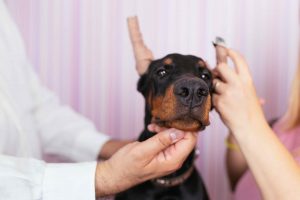 As reported in our August 2018 issue, there are websites dedicated exclusively to selling cropped and docked dogs to UK owners. Ear cropping is illegal in the UK under section 5 of the Animal Welfare Act (2006), unless it is carried out for medical reasons, but importing cropped dogs remains legal. 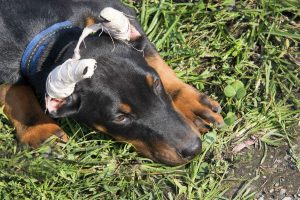 RSPCA chief inspector Mike Butcher said at the time, “We think that many people simply aren’t aware that ear cropping is illegal. In some cases, people are misleadingly told that a cropped ear is a more natural look for the dog. That’s why it’s so important to get the right advice and information out there, so owners can make informed decisions before buying a dog.” 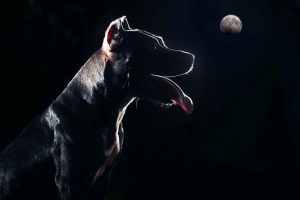 Jordan says, “As ear cropping has been illegal for well over a century in the country, it makes no sense to leave open the possibility of buying a cropped dog from abroad. I feel this needs to be addressed, hence the government petition I have launched.

“The campaign will also aim to stop the use of cropped dogs in UK adverts, as they give the message that it is normal and acceptable for a dog to have cropped ears.”

The RSPCA also has concerns over the normalisation of cropped ears in social media posts. In January, American Bulldog breeder Simon Davis was banned from keeping dogs for life and ordered to pay over £10,000 in costs after he admitted to illegally cropping the ears of several puppies bred in his ‘Lions Lair Kennels’.

Davis was a well-known breeder: his business’s Instagram account has over 140,000 followers and the pups he bred were sold for between £3,500 to £7,000 – several of them to celebrity clients.

Little Mix singer Leigh-Ann Pinnock and her boyfriend, footballer Andre Gray, were among his customers, having purchased a puppy called Kyro. Geordie Shore cast member Aaron Chalmers was also identified as a customer: his dog, Lenny, was from the same litter as Kyro. Both dogs had their ears illegally cropped as puppies, and feature on social media posts. A further nine dogs were found at Davis’s mother’s address; two of them were pregnant and six had cropped ears.

Photographs found on Davis’s phone during the investigation showed some of the puppies he bred as they were undergoing the procedure at the premises. 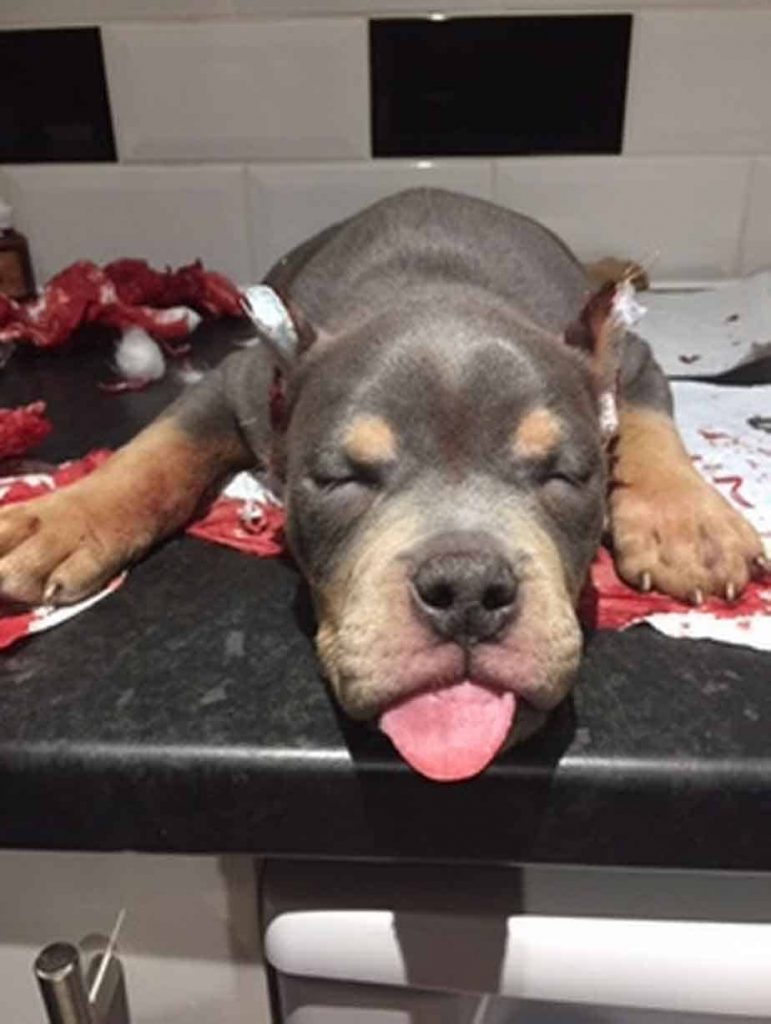 RSPCA prosecutor Sara Pratt said at the time, “As a result of the publicity created by both Simon Davis and the kennel, alongside the celebrity purchasers, there have been numerous images of Lions Lair puppies in the media, including in the USA.

“It’s also impossible to say whether any of the operations carried out had complications at any stage, which would have caused further suffering to the dogs or puppies, such as infection etc.”

Davis pleaded guilty to seven offences under the Animal Welfare Act when he appeared at Nuneaton Magistrates’ Court on 17 December 2019. As well as the lifetime ban on keeping and dealing in dogs, which he cannot appeal against for 15 years, Davis was also ordered to pay £10,973 in costs, given an 18-week prison sentence suspended for 12 months, and ordered to carry out 160 hours of unpaid work. 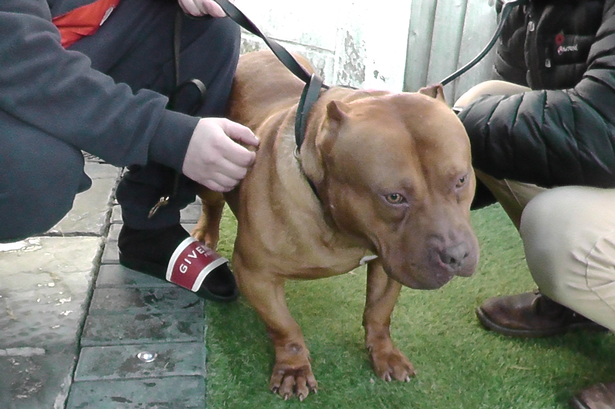 RSPCA dog welfare expert Dr Samantha Gaines says, “Ear cropping is a process where ears are removed or surgically altered, usually for the purposes of appearance. It’s a painful and wholly unnecessary process, which does not benefit the dog in any way and can, in fact, be detrimental to their health, behaviour and welfare

“We do not believe dogs should be mutilated for cosmetic purposes and we’d urge people not to buy a dog with cropped ears as – whether the process was carried out here or overseas – they still will have undergone this very painful process.”

The RSPCA says there has been a surge in reports of dogs with illegally cropped ears in recent years. In 2015, they received 14 reports of ear cropping and cropped ears from across England and Wales. But, last year (2019), that had risen 236 per cent to 47 reports, which peaked to 65 in 2018. In the past five years, the charity has had 178 reports of the practice.

While these are small numbers compared to the total dog population in the UK, the RSPCA is concerned by this growing trend, fearing that “images shared on social media, especially from the USA and in Europe where the practice is legal or unregulated in many states/countries, celebrity culture and an increase in bull breeds seen in advertising is normalising the look and making it more popular”.

An RSPCA spokesperson – from the charity’s Special Operations Unit, responsible for investigating serious and organised animal cruelty such as ear cropping – said, “We believe ear cropping is being carried out illegally in this country. And we also believe that many breeders, sellers and buyers are sending dogs abroad to have their ears cropped before bringing them back home.

“Anyone who is concerned that someone might be cropping dogs’ ears themselves or sending their dogs abroad to have the procedure done should report it to us by calling our 24-hour emergency hotline on 0300 1234 999.” 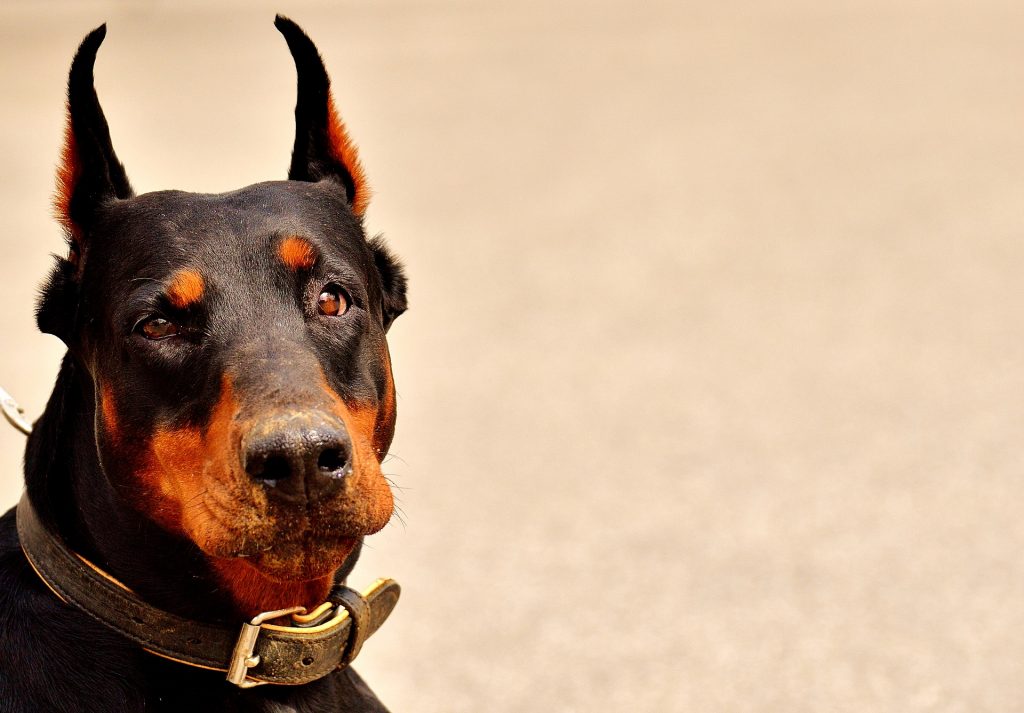 Jordan’s petition has already received support from animal welfare campaigners and charities, including the RSPCA. It reads:

“There appears to be an alarming rise in dogs imported after undergoing the inhumane procedure of having their ears mutilated, fulfilling the desire for a certain ‘look’ and encouraging a procedure outlawed in England since 1899.

“Cropping a dog’s ears is illegal in the UK, yet the numbers appear to be rising. An import ban could be possible under trade rules. There are companies that specifically import dogs with cropped ears for UK owners, fuelling cruelty abroad.

“It’s time to make imports illegal, raise awareness of the cruelty around cropped dogs, and advise the public not to support companies/individuals that use cropped dogs in advertising and social media, as they’re inadvertently promoting this painful practice.”

Jordan adds, “It seems simple logic to me, really. Ear cropping was deemed cruel and outlawed well over a century ago; it follows that purposely looking to buy a cropped puppy should be outlawed as well. If the procedure is unacceptable in this country, paying for a puppy who had to endure it elsewhere should be just as unacceptable.

“We cannot stop cropped dogs from showing up on social media profiles from other countries, but we can and should at least stop their use in our advertising. That look is the result of a procedure that is illegal for good reason, and cruelty should never be normalised.’

You can find Jordan Shelley’s petition to ban the import of cropped dogs in the UK and end their use in advertising on here.