The pandemic has lead to a surge in pet theft. The third petition for pet theft reform has triggered another parliamentary debate. Will the Government finally listen this time?

On Friday evening Betty (my dog) and I appeared on the PBS American news talking about pet theft and how British law does not recognise the pet isn’t just a possession. That pet theft is out of control. That there is little or no deterrent.

Three times the public have very promptly delivered over 100,000 signatures on official Gov petitions calling for more action on pet theft, each time triggering a debate in parliament. We’ve seen great support from individual MPs and I admit, we got our hopes up the first time.

All hopes were dashed when the minister replied so say it’s already covered, everything is okay.

We tried to pre-empt this happening again, by pointing out the facts, but so far, this has been ignored. They still trot out the erroneous stock response that the ancient Theft Act covers pet theft and thieves can get up to seven years in prison.

But they don’t, it’s impossible.

We have eminent QC John Cooper as our legal advisor. He would know.

Even the most organised, pre-meditated, callous crimes involving pets do not result in custodial sentencing unless other crimes are also committed – crimes that involve other things the law obviously values more than our best friends.

I made a very short film to explain how the law works – or doesn’t – and we presented the facts to the petitions committee in many different forms so we couldn’t get a repeat of the lazy reply that there wasn’t a problem, that thieves could get seven years for pet theft.

George Eustice MP had been the first to say there was no need for reform. I am sure he genuinely believed what his advisors told him.

I was sitting next to Professor John Cooper QC when George stood up and said what he did that day in the Westminster Hall of the Houses of Parliament.

Parliamentary protocol stops the gallery speaking in these debates, but I thought John was going to explode or have a heart attack or both. He desperately wanted to correct George – to tell him that it simply wasn’t true what he was saying.

If the Theft act was delivering custodial sentences of seven years we’d not be constantly asking for better deterrents would we?

We caught up with him in the Stranger’s Bar afterwards. Surely we wouldn’t go through all this again after the second petition triggered another debate?

After a great Zoom debate with petition two (due to Covid, no physical debates) we had a new convert in newbie Tom Hunt MP. He listened and he empathised. All the members of the Stolen and Missing Pets Alliance were very articulate. We were desperate to avoid another disappointment.

Yet, that’s exactly what we got. See the letter below from the Ministry of Justice. Or Injustice as it perhaps should be renamed. Yet again the erroneous seven years reply. 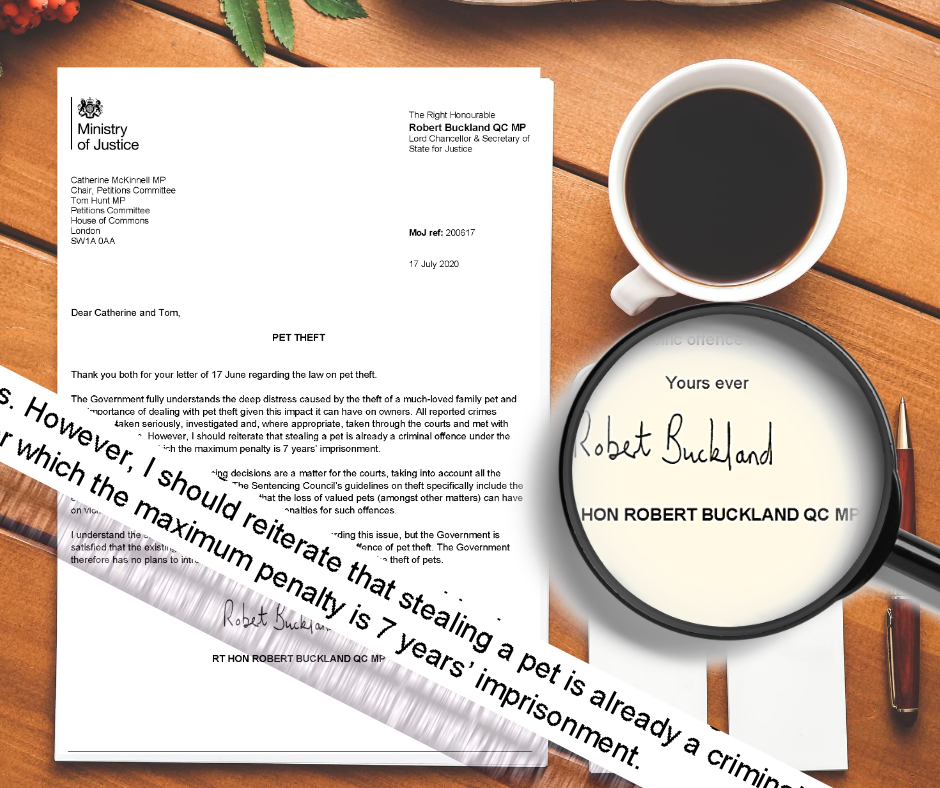 We await the third debate and response with tremendous anticipation. Surely the Government has to listen this time? Can you help? Can you contact your MP? They really are giving us pets lovers the brush off.

Here’s a link to the item on PBS. Can we all please embarrass the establishment into pulling their finger out and getting this sorted?

Do write to your MP and keep signing the open petitions. Do find out more about what you can do to help – here’s a link to the Stolen and Missing Pets Alliance and Dog Lost.

Here’s how to find the details of your local MP – drop them an email.

Pets are family. Family sticks together.

Pets are irreplaceable, minsters that don’t listen to the public… well why not let them know you won’t forget this.

Because if your pet is stolen you’ll never forget it.

If your phone gets pinched you’ll just buy a new one.

See it’s simple isn’t it. They can’t possibly give us the same ridiculously inaccurate reply a THIRD time, can they? 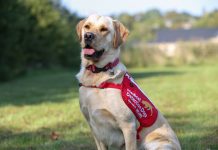