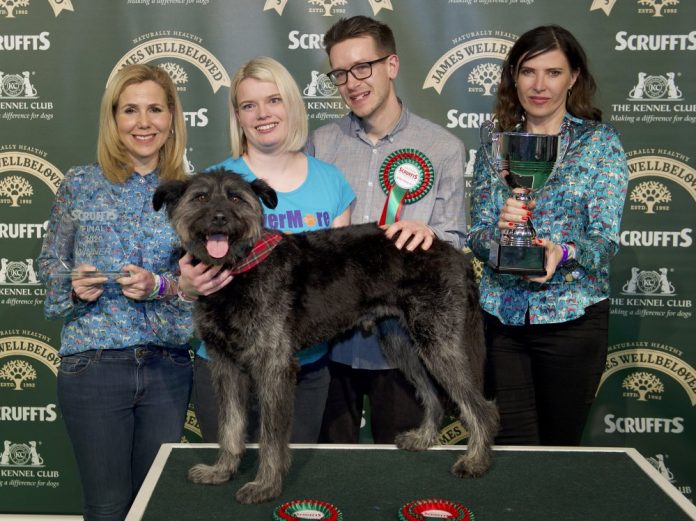 A loveable crossbreed from Newark, Nottinghamshire, was crowned Scruffts Family Crossbreed of the Year last Saturday (7 March) at Crufts before the eyes of his proud owners, Hannah and Stephen Hayes.

Five-year-old Clooney was one of four crossbreed finalists in the national Scruffts competition, which takes place at Crufts and has been rising in popularity year after year. Hundreds of dogs competed in qualifying heats across the country, with 24 dogs and their owners making it through to the semi-finals.

Clooney had already been crowned Most Handsome Crossbreed Dog; the other three finalists were:

Clooney has come a long way since he was found wandering the streets of Romania, in dire need of medical attention. Rescued by Sirius Animal Rescue and Evermore Dog Rescue, he was nursed back to health before he made the journey to a rehoming centre in Nottinghamshire, where he waited for his forever home.

“We entered for the fun of it, we never imagined Clooney would win.”

Soon, he found that home with Stephen and Hannah, who had both had dogs growing up and were looking for a dog of their own after moving together. It was love at first sight when they met Clooney, who went on to become their trusted friend as well as the ring bearer at their wedding!

This is the first time the trio had entered Scruffts, taking part in the local All About Dogs show heat in Newark last year.

Hannah said, “I’m completely speechless. I’m still in shock. We entered for the fun of it, we never imagined Clooney would win.

“When you rescue a dog, as I have done, you do wonder who is actually rescuing who here”

Actress, presenter and comedian Sally Phillips and actress and impressionist Ronni Ancona judged the four finalists, alongside dog judge Robin Newhouse, looking for qualities such as good character, health and temperament with people and other dogs.

On choosing the winner, Sally Phillips said, “Coming here today has been a real pleasure but of course, it’s been an almost impossible task picking out a winner – all the stories are completely heart-breaking.

“I just loved the fact that Clooney was best man at Stephen and Hannah’s wedding and has done wonders for their mental health. When you rescue a dog, as I have done, you do wonder who is actually rescuing who here.”

Do you have a crossbreed dog you think deserves to be the next to win the title? Enter one of the 2020 heats! Find one near you on the Crufts website.

Image by Flick.Digital, courtesy of the Kennel Club