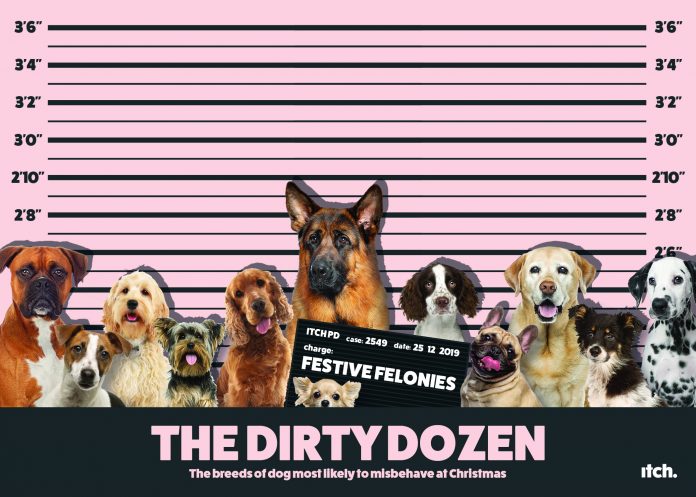 Is your pet on Santa’s Naughty List? According to new research from pet wellbeing specialist ITCHpet.com, over 12 million pets will be in the dog house over Christmas ‘crimes’ – with Jack Russell Terriers topping the list as most likely canine offenders!

The study of 2,000 adults who own a cat or dog revealed that 53 per cent of pet owners admit their four-legged friends have wreaked havoc over the festive period, with one in 10 (12 per cent) saying they’ve embarrassed them in front of their family and friends.

“Your cat or dog might be your best friend, but that doesn’t mean they can’t cause chaos from time to time,” said Charlotte Harper, Co-founder of ITCHpet.com.

“Whether it’s subjecting Auntie Margaret’s leg to a mortifyingly amorous display of affection, gifting fleas to your mother-in-law’s dog, or dragging their butt across the floor while everyone’s eating, their pet-iquette in front of family members can leave a lot to be desired.” 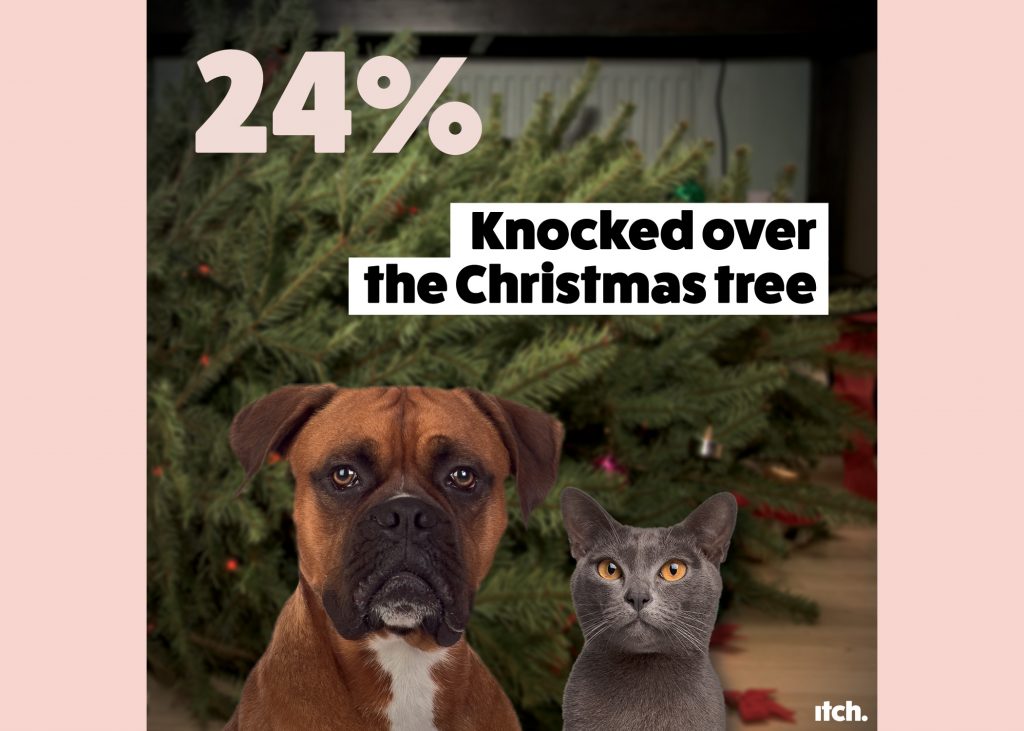 Devouring the Christmas fairy, relieving themselves on the Christmas tree and flashing their ‘lipstick’ in front of unwitting relatives, feature on a list of festive ‘faux-paws’ that British cats and dogs commit over the festive season, according to new research from pet wellbeing specialist ITCHpet.com.

The Top 20 Christmas ‘crimes’ committed by cats and dogs include: 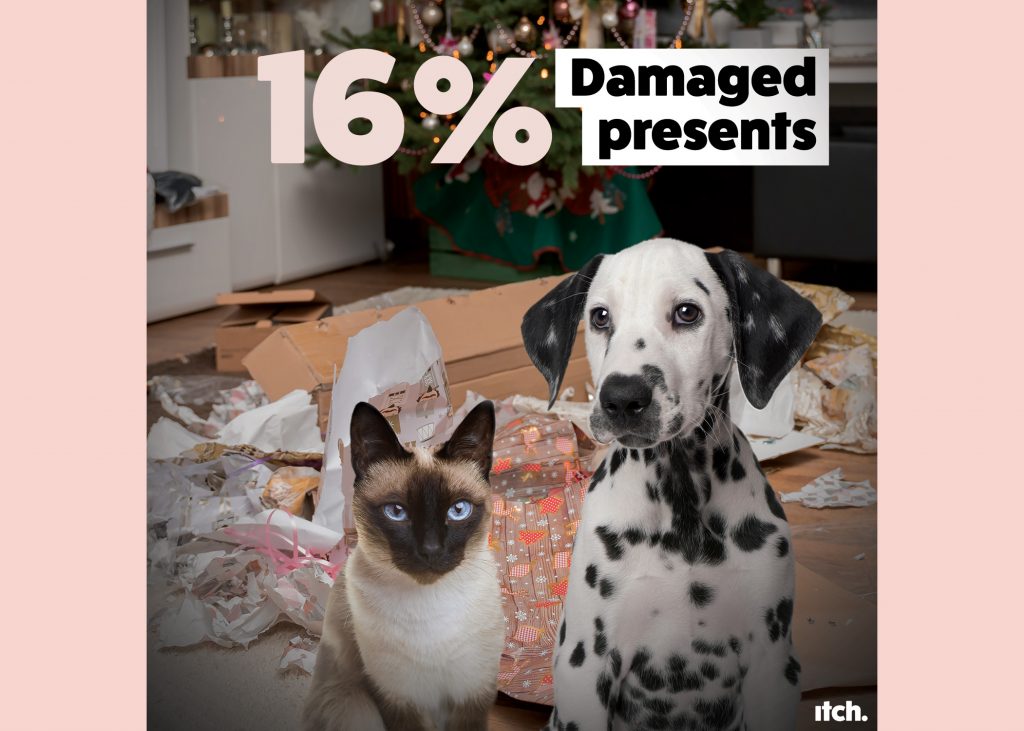 Some horror stories that emerged in the study include a dog who destroyed a Grandmother’s boots, meaning she had to be carried out to the car on Christmas Day; an excited dog who caused delicate glassware gifts to be dropped by enthusiastically humping the leg of the person carrying them; and a canine who left his owner unable to eat turkey for fourteen years, after eating a whole turkey himself and breaking wind so unbearable, it led to a turkey ban in the house!

The top canine criminals are:

A (dis)honourable mention goes to the feline felon who brought in a dead rat and placed it on top of the turkey! What list would your dog be on – naughty or nice? 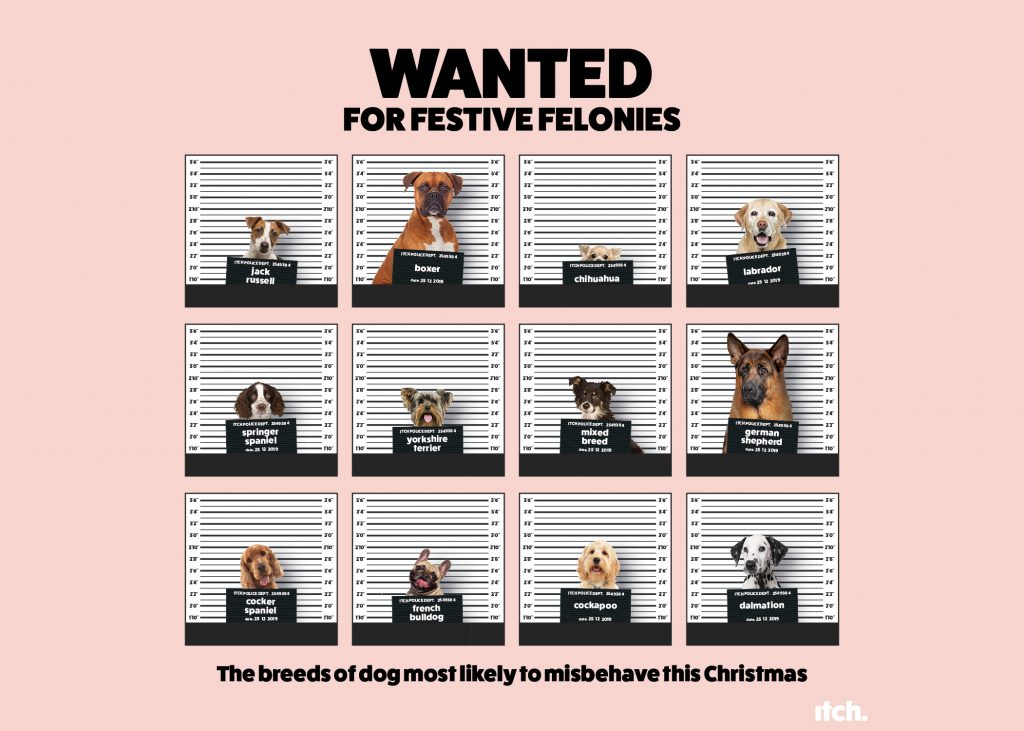