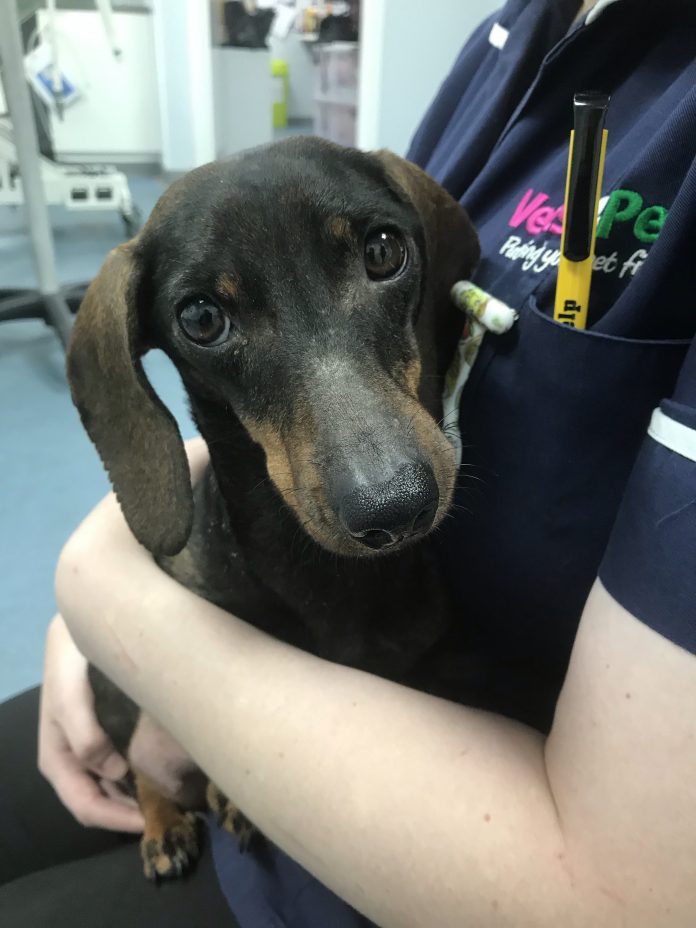 An abandoned Dachshund has been suspected of being used for breeding after she was found dumped alone in the middle of the night – still lactating milk for her absent puppies. The RSPCA are now appealing for information as the upsetting discovery has sparked concerns on the welfare of the litter.

Dolly, named by her rescuers, was found by a member of the public at around 3am on Monday (19 August) in an alley off Wymington High Street, Northamptonshire. She’d been left in a small, metal dog crate with a red fleece blanket and a water bowl. 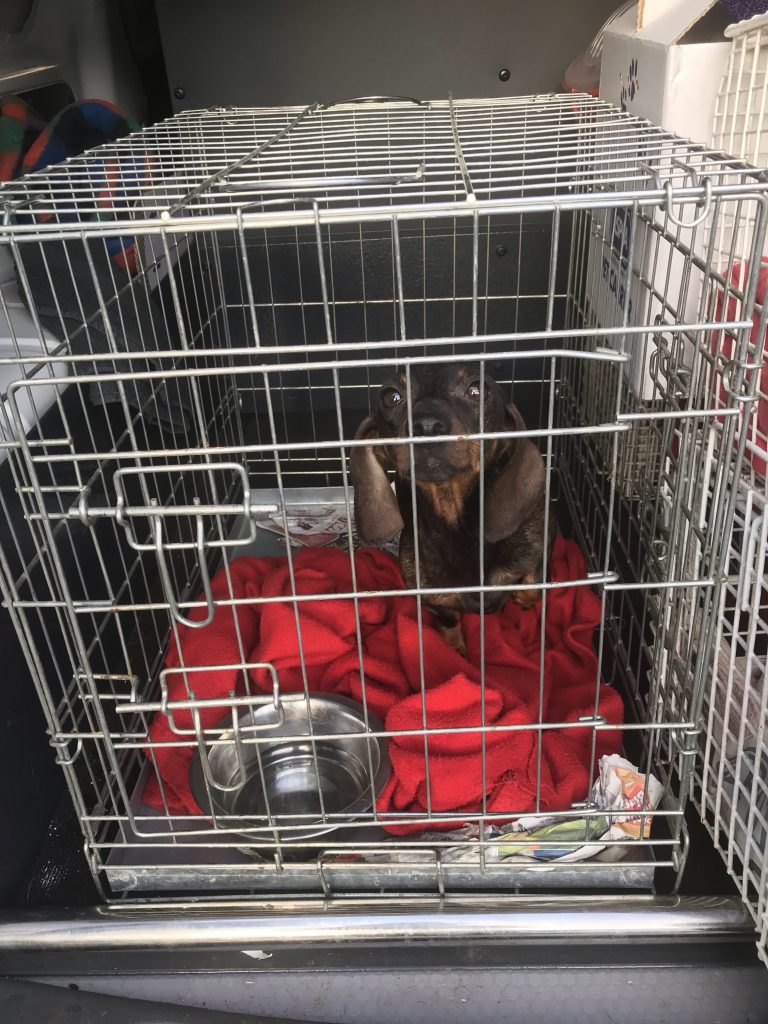 The man who found Dolly contacted the RSPCA and Inspector Sally Kearns went to collect the frightened pooch. “Dolly was dumped in the middle of the night which suggests to me that someone was trying to cover their tracks,” Sally said. “We took her to the vet in Northampton but, unfortunately although rather unsurprisingly, she isn’t microchipped.

“She has enlarged teats and is lactating so has obviously recently been feeding her puppies. It’s extremely concerning that her pups are now out there somewhere without their mum.” 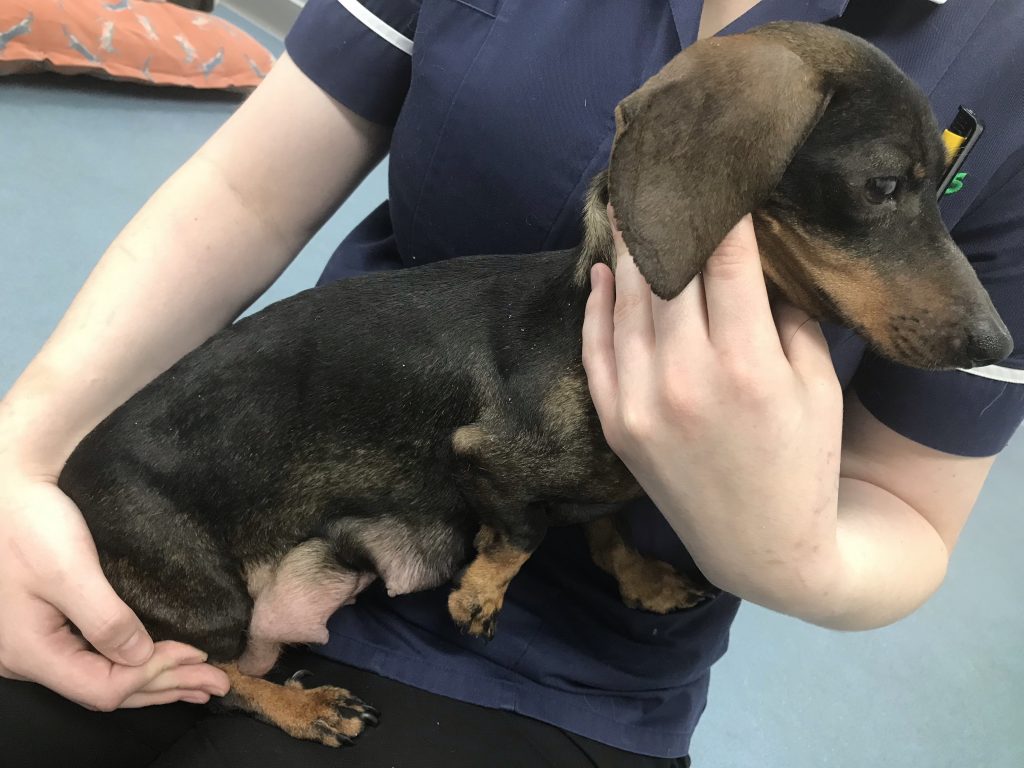 Sally added, “My suspicion is that Dolly has been used as a breeding bitch to churn out litter after litter of desirable and valuable dachshund puppies. She’s a sweet, friendly girl but is nervous and not in the best condition so I don’t believe she’s coming from the most loving of homes. I believe she’s been used for breeding and has now been cast aside. It’s heartbreaking.”

Dolly is thought to be aged around four or five, she is skinny and nervous of people but is friendly. The Dachshund is now being looked after by a fosterer and if no one comes forward to claim her then she will soon be looking for a new home.

Sally is now appealing to the public to help find who is responsible for abandoning her and would like to check on the welfare of her puppies. “Anyone who saw anything suspicious in the High Street area of Rushden on Monday night / Tuesday morning, or who knows where Dolly may have come from can contact the RSPCA’s appeal line on 0300 123 8018 and leave me a message,” 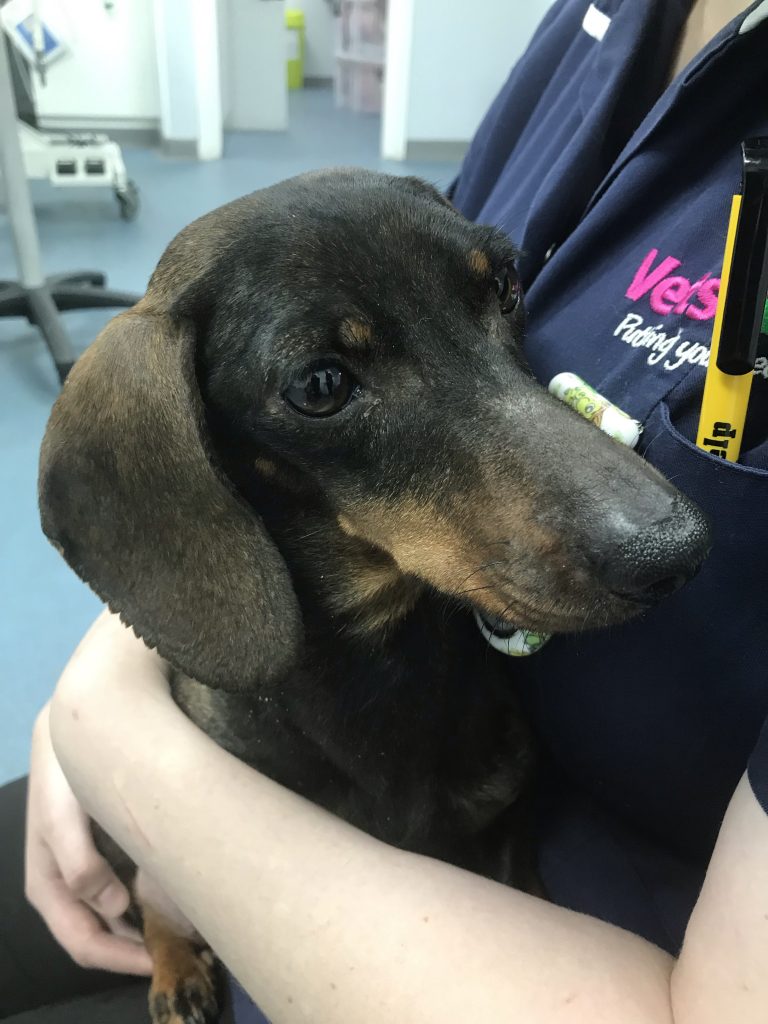 The RSPCA encourages anyone thinking of getting a dog to consider rescuing instead of buying a puppy. There are RSPCA centres across England & Wales with dogs of all ages, breeds and sizes waiting for new homes: www.rspca.org.uk/findapet.

Anyone who wants to buy a puppy should ensure they buy a dog from a responsible breeder and use The Puppy Contract to help find a happy, healthy dog: www.puppycontract.org.uk.