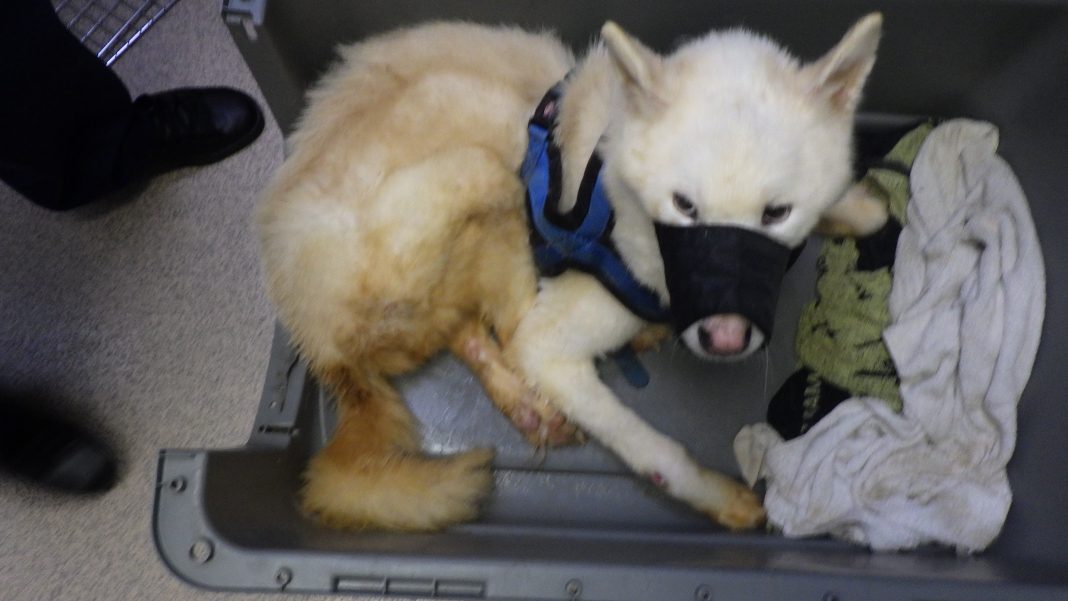 A man has been disqualified from keeping animals for ten years after his husky, Kenz, was found emaciated and living in his own filth inside a small cupboard turned into a makeshift dog pen.

Lee Mark Aveyard appeared before Bradford Magistrates’ Court last month (Wednesday 20 February), in a prosecution case brought by the RSPCA. He pleaded guilty to one offence of failing to meet the needs of Kenz by failing to provide a suitable environment and one of causing unnecessary suffering to him by failing to explore and address his poor body condition under the Animal Welfare Act 2006. RSPCA chief inspector Heidi Jenner said, “As soon as the inspector walked through the door to the property there was a strong smell of ammonia.

“She was stunned to see where Kenz was living. He was in a cupboard at the top of the stairs that had been turned into a dog pen with chicken wire and bits of wood, wedged in place with a cricket bat. “Kenz was collapsed in a pool of urine with his back legs sprawled out to the side and surrounded by faeces. There was no evidence of food or water. The smell was horrendous and even through his thick coat, which was stained yellow, you could see how skinny he was.

“He was unable to stand, and the inspector said that when she lifted him up by his harness it was like holding a shopping bag, he just hung there.” Kenz was taken straight to the vets where they found him to be anaemic and badly emaciated with his ribs, spine and pelvis all clearly visible. He had pressure sores on his legs, the biggest one on his left hind leg measuring 2.5cm in diameter and 1cm deep. Weighing just 13.7kgs when he was rescued, Kenz is now a healthy 34.4kg and is in the care of RSPCA Lancashire East Branch – where he has been since November. Staff will continue to work with him to prepare him for a forever home.

Animal Centre Manager Jeanette Ainscough said, “Seeing Kenz now, it’s hard to believe that he is the same dog. His transformation has been absolutely amazing. Unfortunately, it hasn’t been without some big setbacks though and as a result Kenz isn’t ready to be adopted just yet.

“It was discovered that some metalwork that must have been put in his leg as a puppy had moved, causing Kenz to be in a lot of pain, so an operation was needed to repair that. We thought he might have to have it amputated but daily physiotherapy and weekly hydrotherapy from the brilliant people at My Vet Hydro has meant we’ve been able to avoid that. My Vet Hydro donate their services to us for free and we can’t thank them enough for everything they’ve done to help Kenz, and others.” As for Aveyard, the court heard that the he had pleaded guilty at the first opportunity, and that he was shortly to become the carer for a relative. As well as the disqualification, he was sentenced to a 12-month probation order, with 15 rehabilitation activity requirement days, a five-month curfew order between 7pm and 7am and was ordered to pay costs of £300 and an £85 victim surcharge.