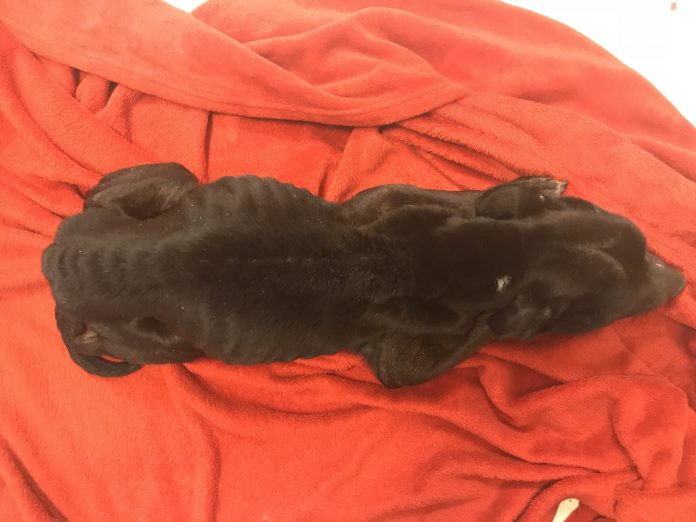 The RSPCA are appealing for information after an extremely emaciated staffie was found abandoned in Grimsby.

The animal welfare charity received a call on Sunday 20 January to a three-year old Staffordshire Bull Terrier type dog that was found in an awful condition on Wooton Road. Unable to stand, the poor dog’s muscles have wasted away so severely in his jaw that he can’t even open his mouth. He was taken to a vet immediately for treatment, but doesn’t have a microchip so an owner is yet to be traced. The staffie is brindle in colour with a white chest and a white spot of fur on the right side of his neck.

RSPCA Inspector Daniel Bradshaw, who collected the staffy, is now investigating. He said, “I was appalled by his condition and to think that people could let him get into this state. This poor dog must have experienced such pain and discomfort leading up to looking like this. This is not acceptable under any circumstances and I am keen to speak to anyone who knows where this dog has come from.” As well as being very skinny, the dog also has discharge coming from his eyes, overgrown nails which have cut into his pads, a prolapsed penis and is very anaemic.

Inspector Bradshaw added, “He is now in the care of the Blue Cross in Grimsby but at this stage his condition is very touch and go. I am now appealing for anyone who may recognise him, or anyone with further information, to please contact us on our inspectorate appeal line on 0300 123 8018.”