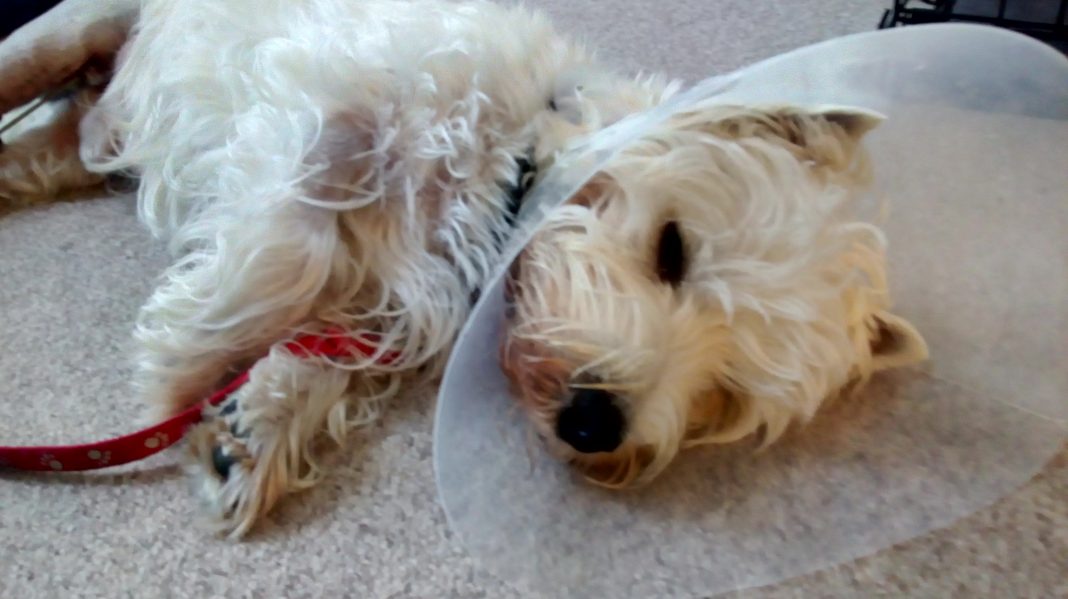 A Westie pup from Bournemouth, eighteen-month-old Buddy, had to undergo emergency surgery following an attack at the Upton Heath Nature Reserve that left him with serious injuries – including a broken leg, a deep gash on his abdomen, and puncture wounds all over his body.

His owner Kate and her elderly mother, who wish to remain anonymous, were also attacked and injured as they tried to protect him. Recalling the incident, Kate said, “We were enjoying our walk and were about 10 minutes from home when we noticed a couple with three dogs in the distance. I saw the largest of these dogs stop and stare at us, going very still.

“I said to my mum ‘I don’t like the look of this dog’ and within seconds it was charging at us. I picked Buddy up as the dog started jumping up. One of the owners came over but his other two dogs saw him running, raced ahead of him and knocked us both to the ground.” The dogs, three Rottweilers, tore into Buddy and bit Kate as she tried to pull her dog to safety. The owner of the three out-of-control dogs fled the scene with them as the attack ended. Police were called and Kate was taken to hospital for treatment for her injuries, while her mother rushed Buddy to receive emergency veterinary treatment.

PDSA vet, Paul Cossey, said, “Buddy was in a terrible state when he arrived, still in shock after his ordeal. He had broken his leg and had a large wound across his abdomen, which fortunately hadn’t penetrated into his organs, as that could have proved fatal. After his complex surgery he was hooked up to a morphine drip to control his pain.” Buddy returned home the next day, but had to return regularly for follow-up treatment.

“Buddy’s wounds are starting to heal now but the psychological scars will last a lot longer,” Kate said. “I’m now terrified to take him on walks and Buddy is a nervous wreck. Any slight noise he jumps out of his skin, I’ve even had to put a sign up asking people not to press the doorbell as it upsets him.

“People need to have control of their dogs, especially if they’re a danger to other pets or people.” Anyone with any information about the attack, which happened on Wednesday, 6 June, is asked to contact Dorset police by calling 101.