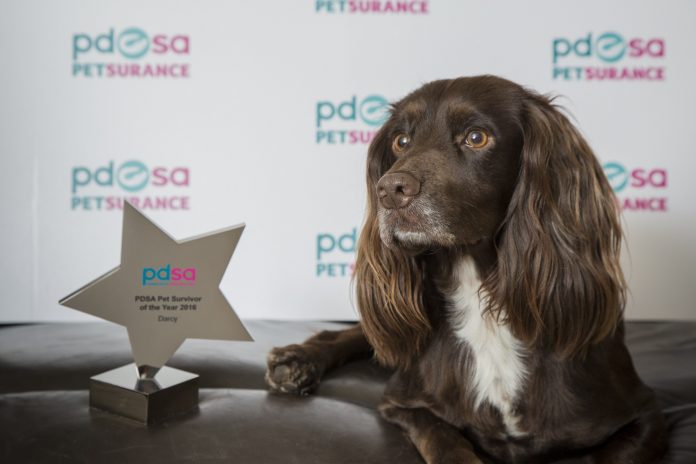 Vet charity PDSA launches its search for death-defying dogs, miracle moggies and plucky pets in late July. The awards are open to any pet treated by a vet in the UK for a life-threatening illness or injury between 1 January 2017 and 31 August 2018.

PDSA Vet Olivia Anderson-Nathan said, “Every day, dedicated vet teams save lives and help get our beloved pets back on their paws after serious injury and illness. The PDSA Pet Survivor Awards recognise those extraordinary stories which capture a pet’s fighting spirit, their owner’s dedication and the expertise and skills of the vets and vet nurses involved. We welcome entries about death-defying stories of bravery and determination, to recognise the important place our pets have in our lives.”

Last year’s winner was miracle dog Darcy, from Dundee, who sustained terrible injuries after a 60ft fall off a dam, but made an astonishing recovery.

Spaniel Darcy, who was two at the time, was on a Highland walk with her owners, Gordon and Wendy Lyon, at Glascarnoch Dam in July 2016. She suddenly jumped a five-foot wall, only to plunge 60 feet down the concrete slipway on the other side. It was a miracle she was alive, say vets, having suffered multiple life-threatening injuries. These included a ruptured spleen, damaged liver, air leaking into her chest, fractured pelvis, a fractured and dislocated front leg and a complex open fracture to her back leg and hip joint.

After emergency surgery at a local vet practice to save her life, brave Darcy endured lengthy hospitalisation at Parkside Vets in Dundee for three more operations, then needed months of further treatment and rehab. At first it wasn’t clear if Darcy would ever be able to walk again, but her recovery has been described as ‘miraculous’ by her vets and she was awarded the coveted title of PDSA Pet Survivor of the Year 2016, and has since made a full recovery.

Skittles made headlines when he was found impaled on railings in Cricklewood, London. The poor ginger Tom was rescued by the local fire brigade, who had to cut through the railings to free him.

He was taken to a local vet where careful surgery removed the railings from his body. Miraculously the spikes had missed all vital organs and arteries. He was then taken to RSPCA in Putney, where they were finally able to trace the poor puss’s owner, Shanakei Forde, and they were tearfully reunited. Skittles was then transferred to Hendon PDSA Pet Hospital for a further operation and follow up treatment.

Skittles has since made a full recovery and is being entered into the PDSA Pet Survivor Awards to recognise his incredible bravery, as well as all those who helped to save his life.

If your pet has beaten death by a whisker and survived to tell the ‘tail’ then PDSA want to hear from you.

Pet owners wishing to nominate their pet can enter online. The closing date is midnight on Sunday 9 September 2018.