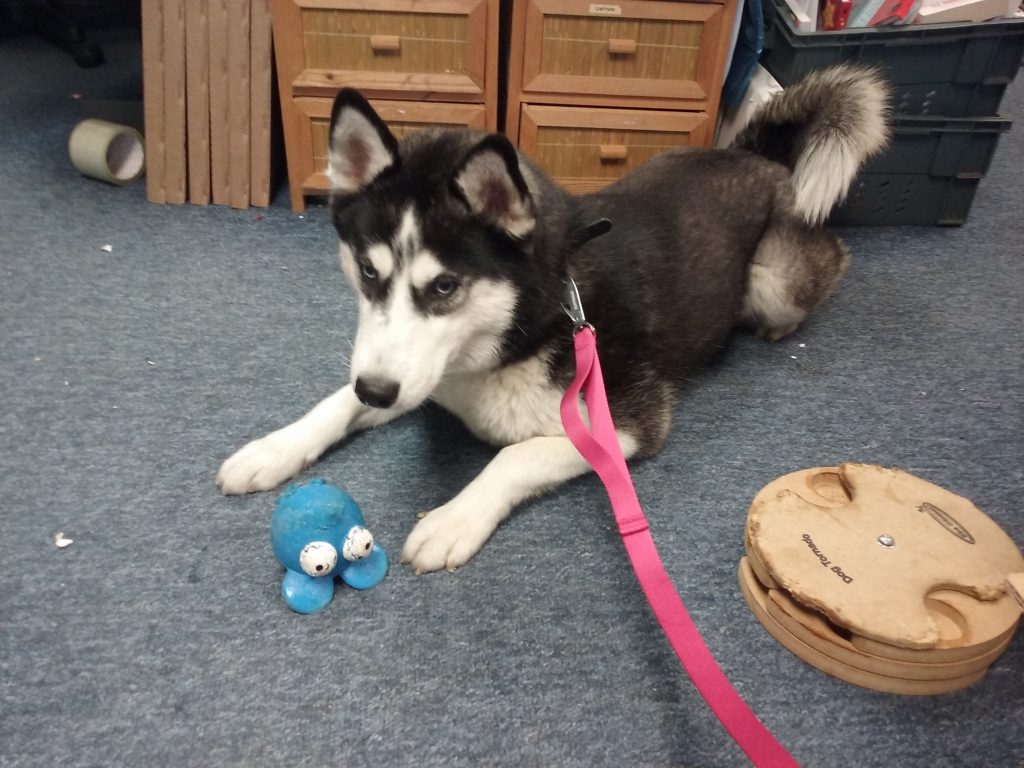 This morning has been rather unusual here at Dogs Today…

I was on my way into work this morning and as I approached the bus stop from Woking town centre I could see a husky-type dog wandering up and down the road. As she came closer I noticed that she was without any form of tag and more importantly without an owner.

I managed to grab her by the collar before my colleague Alessandra arrived. I gestured at her to come quickly so she could take hold of the dog whilst I attempted to call the local dog warden – our new friend becoming increasingly distressed as more people came towards her. We then sat at the bus stop wondering as to what we should do. We couldn’t stay in Woking with her and no one else was available to take her in so, after a quick dash to a local cafe to ask for some form of rope to use as a lead, we then decided it was best to take her with us to the offices where at least she could run around and eat treats in safety! Alessandra, our new furry friend and I all hopped onto the bus to Chobham where we managed to distract her for a few minutes with a carrot – but she wasn’t very impressed with vegetables! Instead she sat upright and stared out the window in a surprisingly calm manner. After a short walk to our offices (where she managed to distract everyone from working for at least 15 minutes!) we then called the local dog warden and put a call out on our social networking platforms to reunite her with her owner, and thankfully within the space of a five minutes we had a response! It turns out that our new four-legged friend was called ‘Loki’ and was in fact being looked after by friends of her actual owners hence why she was missing her identification tag. According to the couple who had come to collect her, she had managed to escape having recently learnt how to open doors! It’s events like these that highlight the importance of ensuring that your dog is properly identifiable at all times; especially if he or she is residing at a temporary residence.

Anyway, ‘Loki’ is now currently on her way back to Woking to enjoy the rest of her holidays with her temporary owners – here’s to hoping she doesn’t escape again!