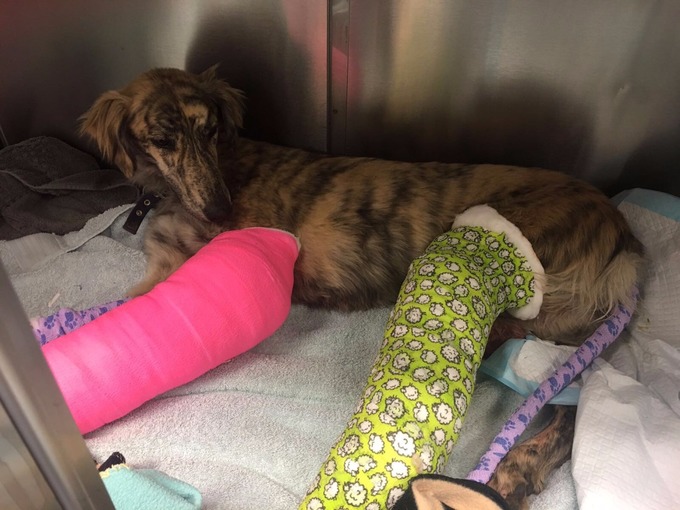 A reckless and heartless driver is being pursued by police after a female Lurcher was thrown from the back of a van onto a busy motorway in Surrey. The incident took place at around 4pm on Thursday 2 March, as the vehicle travelled northbound on the M23 between junctions eight and nine, just north of the Gatwick junction.

Thankfully, the dog was given first aid by a passing motorist who stopped to help, before Surrey Police took her to a local vet. She was treated for two broken legs amongst other injuries.

Jayce, as she has now been called, is recovering well in a dedicated foster home, thanks to Foal Farm Animal Rescue Centre in Kent.

On March 11, the rescue group posted an update on Facebook, writing, “What a difference veterinary care and love can do! Just look at our special girl who was thrown out of a vehicle 9 days ago! Although her injuries were extensive, Jayce’s will to live and recover shines through and she is going from strength to strength in her foster home. In fact, she’s keeping her fosterer really on her toes!”

PC Sam Ainsworth, who is investigating the case, had the following to say, “This really is a cruel and distressing incident and I’m appealing for anyone who knows who might be responsible to do the right thing and call us with information so we can bring the offender to justice. I’m sure there must have been other motorists who witnessed the events last Thursday and I would urge them to get in touch.”

Anyone with information should call Surrey Police on 101 quoting reference number 45170022317. You can also use the online reporting system found at https://report.police.uk and enter the reference number in the ‘Additional information’ section. Information can also be passed anonymously to the independent charity Crimestoppers on 0800 555 111.