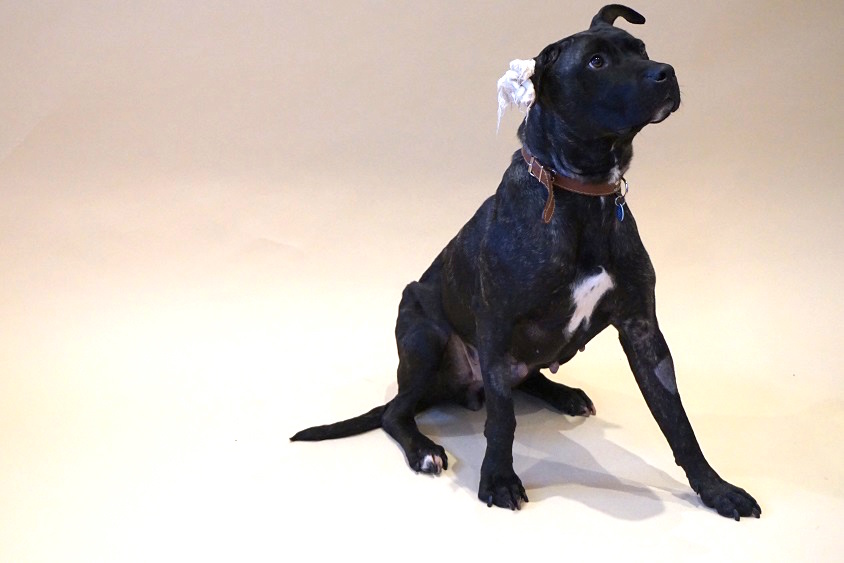 In an incredibly sad case, a Staffie cross female has been rescued after she was found soaking and shivering in the Grand Union Canal in Park Royal, North London.

The dog, who is only around 14 months old, has been named Abbey by staff at The Mayhew Animal Home, where she has now found care and sanctuary.

Abbey was found to be quite underweight, and despite her age had likely already been used for breeding. She was also found to be suffering with a severe ear infection. Abbey has now had a Total Ear Canal Ablation (TECA) and a Ventral Bulla Osteotomy (VBO) on her right ear – her whole ear canal has been removed and her middle ear flushed and cleaned out. If Abbey had been left untreated for much longer, she could have suffered permanent damage to her balance, leaving her with a head tilt and unable even to walk straight. Thankfully, there is no risk to her now, and she is recovering very well.

The Mayhew’s Head of Animal Welfare, Zoe Edwards, said, “At The Mayhew we help hundreds of people in crisis situations every year, and we wish whoever had abandoned poor Abbey had alerted us or another rescue shelter. We are here to assist and advise on the best course of action for the animal, no matter what the problem is, we absolutely do not judge.” Now healthy and free from pain, Abbey’s gorgeous friendly nature has emerged; despite all she has been through, she still loves people. She will soon be ready for a loving new home, so look out for her on The Mayhew’s website.

Find out how you can help the work of The Mayhew by visiting www.themayhew.org/donate

Images via The Mayhew Animal Home