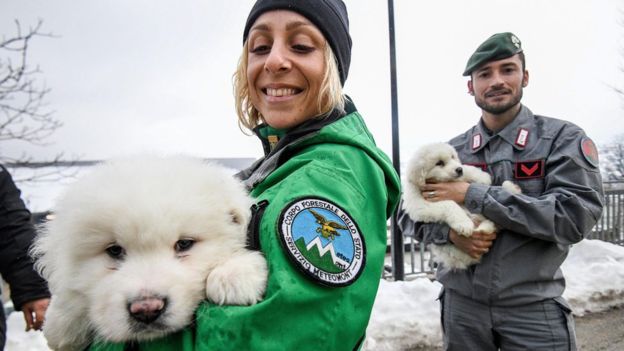 A litter of adorable puppies have been rescued from the rubble of the Rigopiano hotel, which was crushed by the deadly avalanche in Abruzzo, central Italy. The three dogs were removed from the chaos on Monday, after surviving for days under tons of snow, giving rescuers renewed hope that more people can still be found alive.

The number of confirmed deaths has now risen to 14, although there are still 15 people missing, and 11 freed survivors so far. However, there are now hopes that the snow could in fact be aiding those still trapped, insulating them from the freezing temperatures. The rescue teams continue to work with shovels and saws, and it’s now being considered whether to start using industrial scale equipment on the buried ruins.

But the recovery of these three, shaggy-white Maremma Sheepdog pups has given firefighters hope. As spokesman Luca Cari said, it’s now a “fight against time” to rescue the missing people from this horrific tragedy.

“We knew these dogs were there but we did not know where exactly. When we understood where they were, we warned the firemen, who were allowed to enter the structure. We located them in the boiler room. Now the priority is to get them seen by a veterinarian, even if at first glance it seems that they are in very good health.”

Elated emergency crews carried the pups out in their arms as one firefighter – overcome with emotion – nestled his face amongst the pups giving them some much needed affection. The puppies were born last month to the hotel’s resident sheepdogs, Nuvola and Lupo, an event which was covered significantly on the hotel’s Facebook page. They had both found their own way out after the Wednesday afternoon avalanche.

“They just started barking very softly,” said Sonia Marini, a member of the Forestry Corps. “In fact, it was hard to find them right away because they were hidden. Then we heard this very tiny bark and we saw them from a little hole the firefighters had opened in the wall. Then we expanded the hole and we pulled them out.”