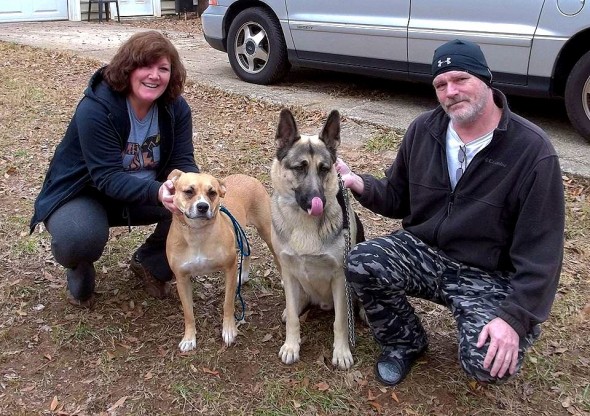 A three year-old shepherd mix by the name of Kailey had been through quite enough adversity. Despite her sweet nature, she had suffered abuse at the hands of previous owners and therefore had not only developed trust issues but an inclination to snap at people too. Subsequently, she had been living at a shelter via DeKalb County Animal Services for just over a year, until last December, when a public plea made on behalf of foster parents Jacqueline Berlin and Keith Santer-Peham, saw Kailey finally adopted by a lady called Suzy Chandler – just two days before Kailey’s scheduled euthanasia.

Jacqueline spoke of how difficult it had been to rehome Kailey.

“Her one issue was that something has happened to her in her past, so that if you try to touch her and she did not know you she would snap at you. Because of her issue, it was really hard to get her adopted.”

As a result, she decided to upload a post onto Atlanta Shelter’s Facebook page appealing to introverted-types who would reap the benefits of rehoming ‘Velcro-dog’ Kailey. An intrigued Suzy Chandler applied to adopt immediately, recalling what Kailey had been through saying, “it just pulled on our heartstrings, we just thought we would be the perfect people for her […] It was a perfect match.”

Within the space of a few weeks she would be proved immensely grateful of her decision.

It all started last Friday morning when Kailey began acting rather strangely.

“All of a sudden she just started barking and looking at us and growling, like trying to get our attention and I said, ‘Well, what’s the matter with her?’”.

Suzy led Kailey into the garden, and the dog dragged her towards an unusual smell beside the house.

“She pulled me directly over to the side yard […] Right away I smelled overpowering gas and [heard] a loud whooshing sound. It was coming from next door to them where there is an apartment building full of children […] If one person had lit a match, it could’ve been a bad scene.”

Suzy called 911 immediately and the DeKalb County Fire Department arrived to check the air quality at the apartment complex. Fortunately, the leak was repaired and nobody was seriously injured. However, if Kailey hadn’t been so inquisitive, the result could have been catastrophic.

Suzy hopes this story inspires others to adopt shelter dogs who’s lives need saving – as one day they could end up saving yours.

“If you have the space, you have room in your heart to take in a needy animal, to love on them, I mean it comes back to you tenfold”.

See the full story below.

Video and images via Fox News