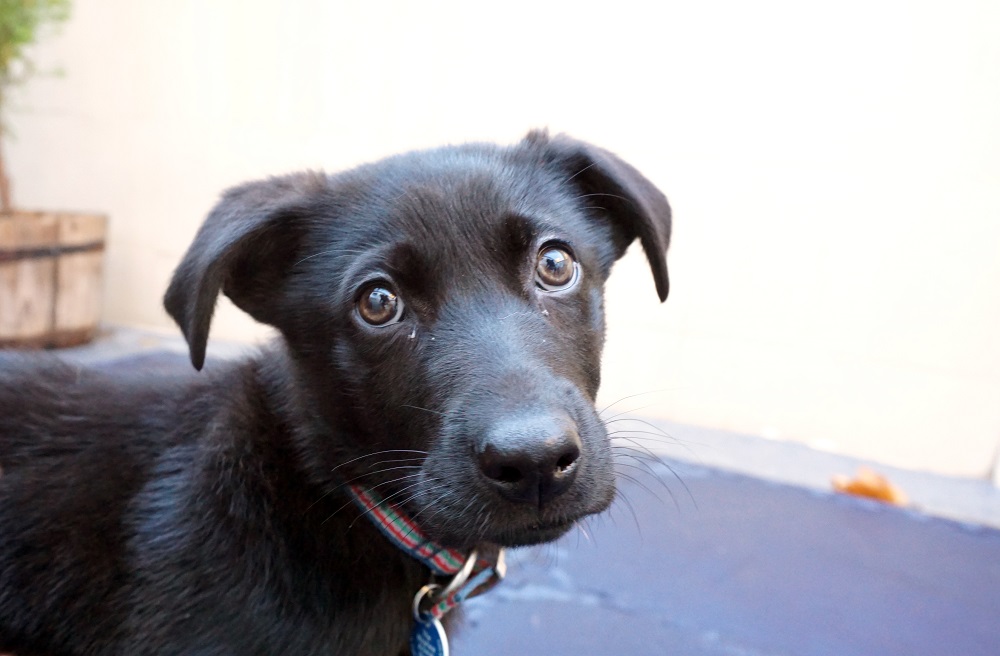 An eight-week-old rejected puppy has found safety and happiness after help from The Mayhew Animal Home.

A black Labrador-cross by the name of Madison was originally sold online to a young man looking to purchase a puppy for a family member. Upon arriving at the seller’s property in Amersham, Buckinghamshire, the buyer was greeted by two men asking for cash up front in exchange for the puppy. The man questioned the situation, after the puppy’s mother and siblings were absent, and the puppy herself was hiding and shaking behind the sofa. Nevertheless, the buyer agreed to go to an ATM machine where, after handing over £295, he was finally given the puppy and her documents.

Later however, the family member rejected the present of the 2-month-old pup. Madison was then taken to The Mayhew Animal Home, where the team discovered with alarm that both her microchip and papers were false. The Mayhew’s Head of Animal Welfare, Gillian Notton, said, “There are already so many unwanted animals in rescue centres like ours that have come from people who buy pets on a whim, especially around Christmas time, without taking into consideration the responsibilities and needs of the pet. Unfortunately, many people don’t realise that bringing a new animal into their home takes a huge amount of preparation, perseverance and patience.

“Absolutely anyone over the age of 16 can walk into a pet shop or buy any animal they want online. There are no checks on the reliability and ability of buyers to look after pets and buyers won’t be aware of the pet’s background. We see a lot of unwanted dogs as they are bred purely to be sold for profit or used as a breeding machine. It is completely irresponsible to buy a puppy online, from pet shops or from illegal breeders but unfortunately, we see this happen far too often. Purchasing pets in this way fuels the already huge problem of illegal breeding and unwanted animals and animal charities like ours are left to pick up the pieces… We ask that owners think responsibly about where they get their pets from and consider adopting a rescue dog or cat first.” The veterinary team at The Mayhew immediately checked Madison over, learning she had also contracted worms causing diarrhoea. She was subsequently given antibiotics, a specific diet and round-the-clock care.

The Mayhew’s Head Vet, Dr. Ursula Goetz said, “Unfortunately we see a lot of puppies like Madison, who have been sold online and from illegal breeders, and with little care taken over their welfare. Many of these puppies are too young to have been removed from their mothers and haven’t been vaccinated or de-wormed.”

Thankfully Madison was soon back on her paws and within days of showing off her sweet character, she was adopted. See her story in full below: