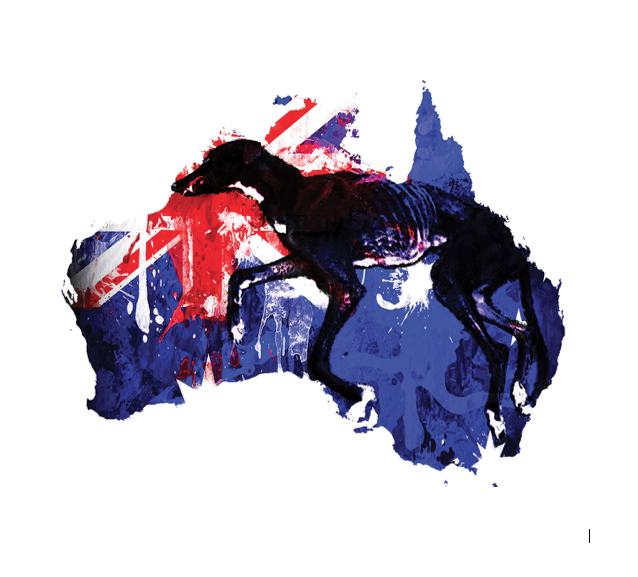 Upsetting news from Australia today (11 October) as the Premier of New South Wales (NSW) announced the state will no longer follow through with a ban on Greyhound racing, which was due to come into effect from July 2017. In the summer of this year, Mike Baird had said in a statement, “In response to widespread illegal and unconscionable activity, including the slaughtering of tens of thousands of dogs, I can announce today that New South Wales is putting an end to Greyhound racing.”

The move was deemed to be a turning point in the campaign to end this ‘sport’ worldwide – Australia represents the third largest Greyhound racing industry globally, and New South Wales alone is home to 34 of the country’s 77 tracks. Now, this will not come to pass, despite horrifying discoveries. A six-month investigation, the results of which aired on state television, initially led to the consideration of a ban. It exposed the appalling practices imposed by some dog trainers, from ‘live-baiting’ (having Greyhounds attack animals such as possums and cats to supposedly improve motivation) to illegal drug use. Racing greyhounds in this state have tested positive for all manner of substances, from cocaine to amphetamines.

A special commission was ordered, which after lengthy inquiry condemned not only the cruelty of the few but the indifference of the many. The industry had been turning a blind eye to barbaric practices for years. There were accusations that even ‘clean’ trainers knew of what was happening, but did not speak out.

But now all this work has been for nothing, with Baird reneging on his plan. In the wake of plummeting approval ratings, Baird flinched, saying that he had ‘underestimated’ the desire to give this industry ‘one last chance’.

“I previously didn’t think the industry could change, it is clear the community wants to give them the opportunity.”

Reforms such as reducing the number of tracks, imposing tighter welfare standards and limiting the number of Greyhound puppies bred will instead be enforced – something which trainers are already complaining about, commenting that smaller breeders will be forced out. Consider this is an industry that happily treats its competitors as wastage; at least 40% of Greyhounds are culled before they even make it to the track because they aren’t fast enough. Those who do get to race are likely to have a below-average lifespan anyway, and injuries on the track, due to the tight bends and long straights, can be catastrophic.

Money is winning; this ‘sport’ is a major gambling pull, generating tens of millions of dollars every single year. Unsurprisingly, Baird is facing major criticism for the U-turn – from being called ‘spineless’ and ‘weak’ on his Facebook page, to facing the condemnation of animal welfare charities and opposing politicians.

The NSW Greens MP Mehreen Faruqi urged Baird to stick with the plan.

“He will lose all credibility,” she told ABC radio. “For true strong leaders you have to make decisions that are right – this was the right one to make.”

NSW Opposition Leader Luke Foley of Labour, who had lobbied for the ban, was incredulous.

“Let’s be honest, Mr Baird has preached at us all for three months, he’s a lay preacher who told us that greyhound racing was morally evil activity that he’d rub out.

“And today the mother of all backflips. We know he doesn’t believe in saving greyhound racing.”

“This is an industry that encourages criminal behaviour. It encourages abhorrent human behaviours. As long as it exists, healthy, beautiful dogs will be killed simply because they couldn’t bring a prize purse home. And it is this callous killing of dogs that created the slippery slope that led to live baiting in the first place.

“Those responsible for overturning this ban should hang their heads in shame. The only participants in this industry who deserved a second chance were the greyhounds. Now, those who callously disregarded their welfare think they are bullet proof. We should all fear what the consequences of that will be.”