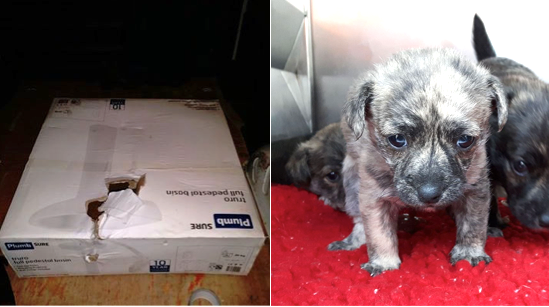 Irish police working on the night of Monday 26 September made a shocking discovery inside a van soon to be loaded at Dublin port: five underage crossbreed puppies, sealed in a cardboard box.

In a dark twist, it has been speculated that these puppies were just a test-run for those due to be imported in the coming weeks for the Christmas rush. As terrier crosses, this litter did not have nearly the same cash value of the puppies that are normally smuggled from Ireland to Britain, which are normally pedigrees, like fashionable French Bulldogs and Dachshunds, or sort-after designer hybrids like Cockapoos. Therefore, perhaps, had they not survived being packaged in, the traffickers would not have lost much money. Had they lived, the traffickers would have found a new way to hide their illegal living cargo.

Thankfully, the puppies never had to make this awful trip. They are now safely in the care of the Dublin SPCA, and are being treated for dehydration and worm infestations. All five are expected to make a full recovery.

Find out more about the work of Dublin SPCA here: www.dspca.ie