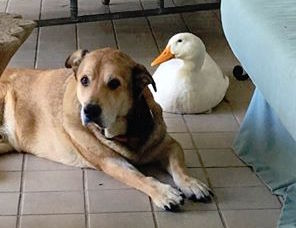 Jacquie Litton is a farm owner from Tennessee, in the USA, and she owns an elderly dog named George. George hasn’t been himself since his best friend, another Labrador named Blackie, died in 2014. Crippled by grief, George has finally found peace – thanks to a duck.

“George lost his partner “Blackie” two years ago this week. They had been together for 12 years. George has been heart broken and has grieved with anxiety so bad that he has almost died twice. We have no idea where this duck came from but he sure does love George and since the duck has arrived George has not cried one time,” Jacqui posted on Facebook earlier this month.

“It is strange for a duck to just appear at our house and be attached to your dog and even more strangely the anniversary week of Blackie’s passing.”

“There is truly a lesson for all of us somewhere in this story of a dog who has found his friend in a duck… I will take the best of care of him, hoping that he stays around.”

Sometimes a cuddle does make everything better.