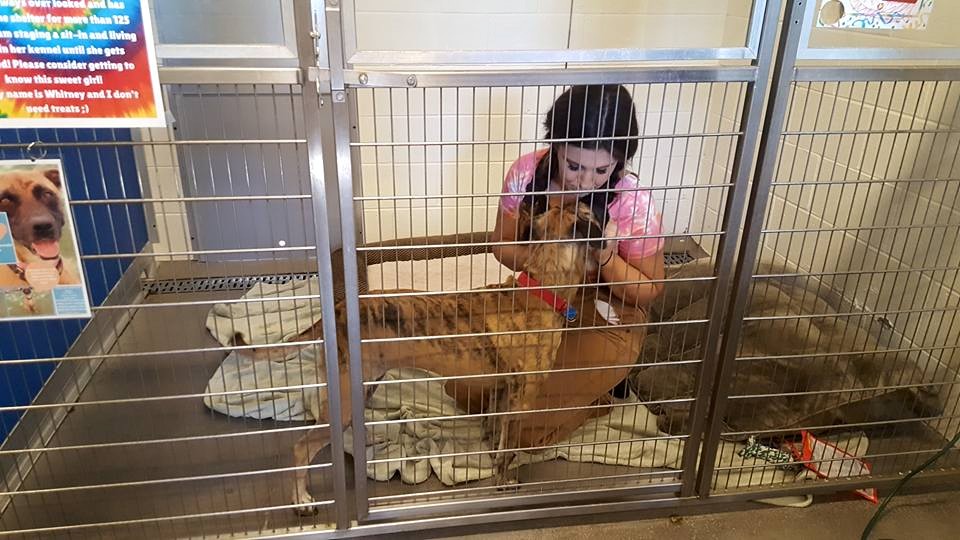 One woman’s devotion to a homeless hound with a staged sit-in has paid off. Whitney Steele, who helps out at the Arizona Animal Welfare League and SPCA in the USA, was tired of seeing Lana being passed over by potential adopters, despite being a perfectly lovable young dog. The Bull Mastiff cross was the rescue centre’s longest-staying resident, with over 100 days spent waiting in her kennel, and it just wasn’t fair.

Whitney decided to raise attention to Lana’s plight, and gain a rescue dog’s perspective, by living with Lana in her kennel and vowing to stay there until a new owner came forward.

Whitney shared her experience of the sit-in on social media, and eat, slept and held meetings in the kennel with Lana by her side, only leaving the kennel when she did, for a spot of exercise and a bathroom break.

After 26 hours, someone came forward to adopt Lana, and free Whitney from the kennel too! Barb Kerstetter heard Lana’s story and decided she was ready for a new dog in her life, having lost her last one a year ago.

For Whitney, this was always the end goal, and she was delighted that her creative idea paid off so quickly.

“I don’t know if she’s as thrilled to have a roommate as I am to be her roommate,” she told Arizona’s 12 News, “but it’s been a really emotional and unique experience.”