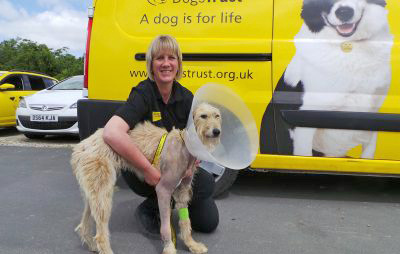 A Lurcher who was abandoned in the woods with a broken leg is now on the mend after emergency surgery and is looking for a special home.

Woody, who the team at Dogs Trust Leeds rehoming centre believe is 18 months old, was found tied to a tree with his lead in Angram Woods in Harrogate a week ago (Thursday 12 May) by a passer by.

Amanda Sands, Manager at the York Road Rehoming Centre, says, “It’s so shocking that someone can do such a thing. It’s hard to imagine how anyone could abandon a dog in this way but it’s even more upsetting that he had a broken leg so was inevitably in a great deal of pain.

“He hadn’t been left with anything to lie or sit on and where he was, wasn’t a busy area, so what would have happened if he hadn’t been spotted doesn’t bear thinking about. We don’t know how long he had been there but we think it may have been quite a while as he’d tried to chew through his lead. Whether it’s minutes or hours, it’s too long. Now we just want to get him back to full health and find him the home he deserves.”

The team are currently getting to know Woody to find out what type of home he would be suited to.

Amanda says, “We are making sure he has lots of love and attention as well as the company he is craving after his ordeal. He’s been through so much. Although I’ve worked here almost 30 years it always shocks me that people can treat a dog in this way. Woody deserves so much better and when the time is right, we will make sure he heads off to his ideal forever home.”