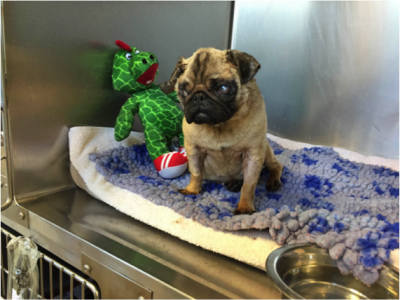 Do you know what happened to Petunia? This Pug, named by the RSPCA, was found abandoned in Links Road, Crinklewood in north-west London on Friday 18 March, curled up in a blanket. After being rushed to the RSPCA’s Putney Animal Hospital, it was discovered she had severe untreated eye and ear infections. Petunia was monitored for the next few days, but ultimately was found to be in such a bad way that it was kinder to put her to sleep.

Petunia when she was found

RSPCA Inspector Leigh Summers, who is now investigating this case, said: “Unfortunately, we weren’t able to do anything to make Petunia more comfortable or to ease her pain.

“It’s utterly disgraceful that someone could just dump her by the side of the road and drive away. She was in a terrible condition with awful infections to both her ears and both her eyes which would have required extensive surgery to treat her ear canals and remove her eyes, leaving her blind.

“I am now appealing for information from anyone who may recognise Petunia, know where she has come from or who might be responsible for dumping her like this, or anyone who may have seen anyone abandoning her in Cricklewood on Friday night.”

Peanut, a Pug surrendered to Battersea Dogs and Cats Home

Sadly, Pugs are increasing becoming victims of mistreatment and abandonment at the hands of humans. In recent years this breed has spiked in popularity, following their appearance in television adverts, movies and the arms of a string of celebrities. With people buying to follow fashion, puppy farmers are cashing in, and inexperienced owners are having to deal with the health problems that are sadly epidemic in the breed. Pugs are prone to eye problems, breathing difficulties and spinal deformities. Ultimately all of this has led to an increase in Pugs in rescue centres; Blue Cross had 16 Pugs surrendered to them in 2014, up from zero in 2009. Battersea has performed operations on over 20 rescue Pugs so far to help their breathing.

Peanut with his new owners, and fellow rescue Pug Jessie

But these are the lucky ones, who had owners who realised they couldn’t cope. Perhaps if Petunia’s owners had sought help sooner, she could have been saved.