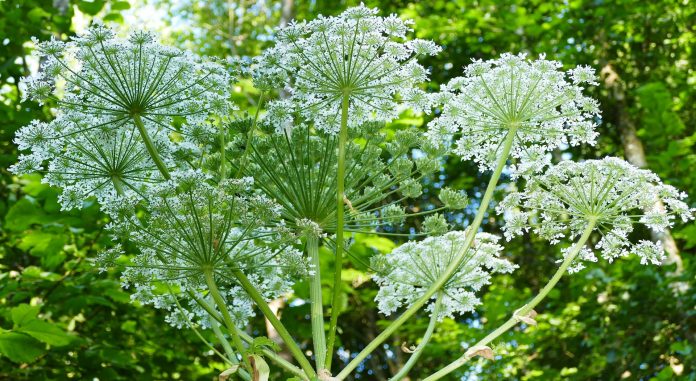 Heracleum mantegazzianum, more widely known as giant hogweed, is native to the western Caucasus region of Eurasia. Introduced to Britain in the 19th century as an ornamental plant for lakesides and gardens, it seems harmless – but its sap can cause horrific injuries and even death, as some unlucky dogs have found out.

The Wildlife Trust explains, “It escaped into the wider countryside and gained notoriety in the 1970s as an alien species that favours damp spots like riverbanks. At this time, many children started to display blisters as a result of touching the plant’s sap while using the stems to make pea-shooters or telescopes: sunlight makes the skin sensitive to the irritants in the plant, causing the skin to redden.

“Today, it is widely acknowledged that neither gardeners nor conservationists should attempt to cut the plant down (exposing its sap) as its toxins can cause serious, recurring skin damage.”

It’s that time of year when Giant Hogweed (Heracleum mantegazzianum) is in full bloom in the woods. The sap is dangerous to humans & dogs and may cause painful skin irritation and blistering. Pls be careful…it looks like very large Cows Parsley… pic.twitter.com/KgcljCUNwf

Vet Charity PDSA also warns against this plant, which can cause serious problems in both pets and humans.

“The stems and leaves of the plant contain toxins that can lead to skin burns and blisters, and the toxin is further concentrated in the sap which is released when the plant is damaged or broken,” PDSA writes.

“Although pets often have some protection from their fur, hairless or thin furred areas (such as the ears, mouth and belly) can be affected. If the sap is licked off the coat or goes into the eyes, it can cause even more damage. It’s important to contact your vet if you think your pet has come into contact with giant hogweed.” 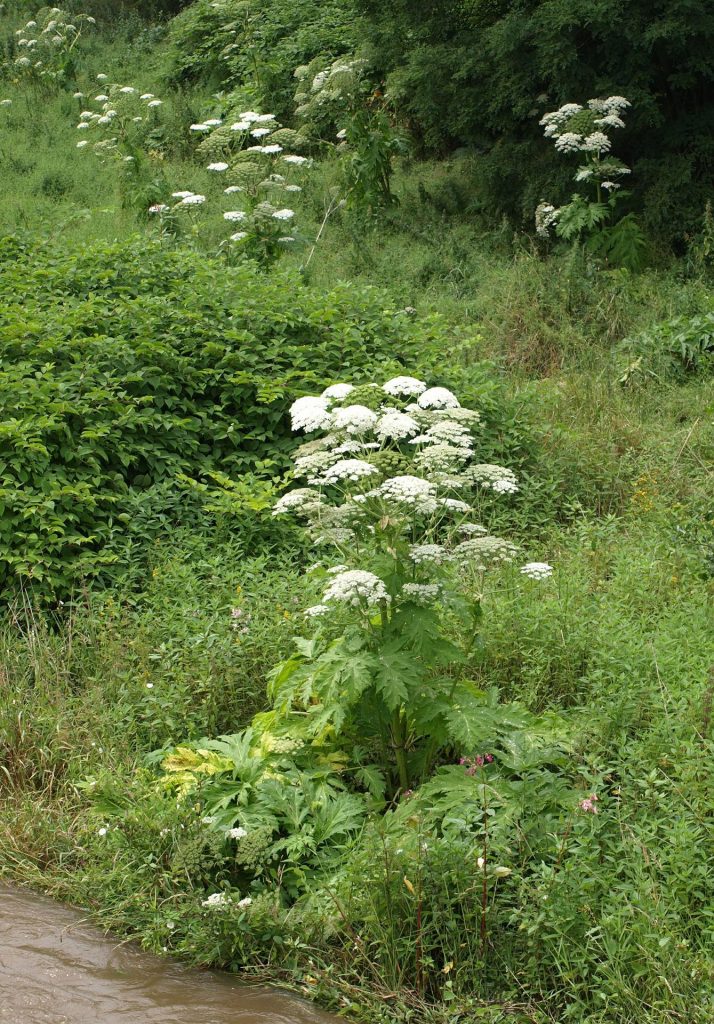 Hattie, a healthy Flat Coated Retriever from East Devon, also suffered horrific burns and blisters after coming into contact with giant hogweed a few years ago.

Owner Diana Newnham says, “Hattie returned from an evening walk, on a route taken most days of the week, and began behaving in a very bizarre manner. She was jumping on beds and furniture, and generally rushing around in some sort of distress or excitement. On a previous occasion she had ‘itchy feet’, from stinging nettles, so it was decided to give her two Piriton tablets.

The behaviour continued throughout the evening, until Hattie flopped to bed. However, in the middle of the night, she became desperate to go out in the garden. Once outside, she was still acting in an unusual way. 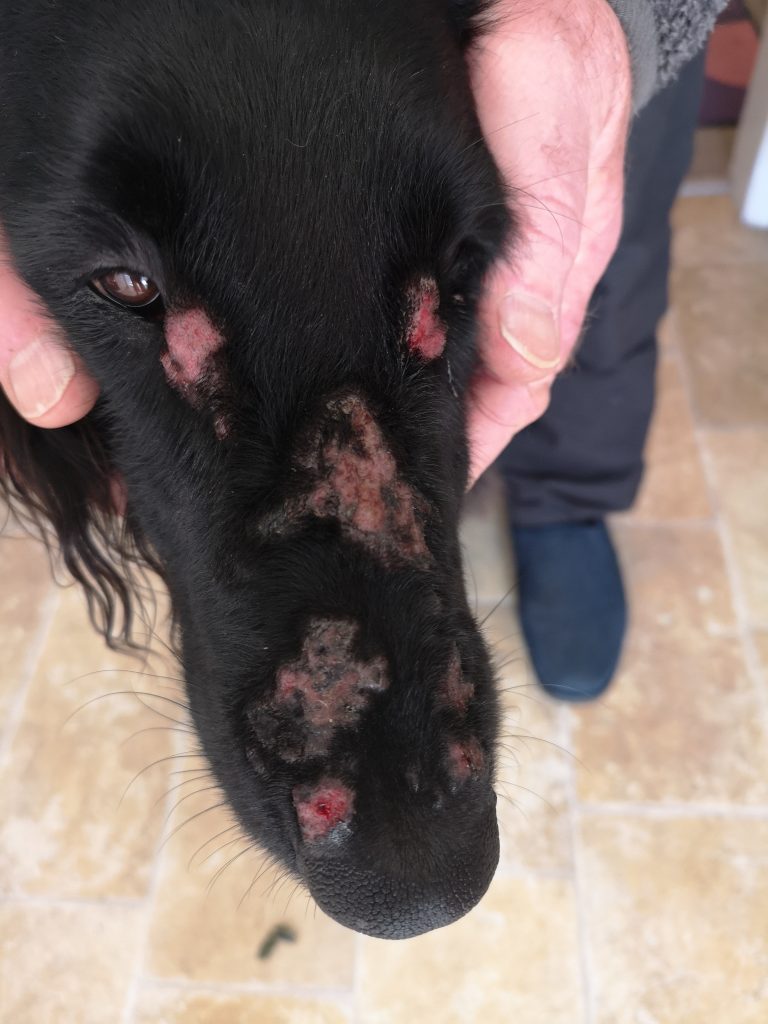 Diana adds, “She only wanted to sit and look at the sky; maybe because the air was cool on her skin? She eventually settled, but the following day she was still a bit skittish. She was eating and eliminating in her normal manner, and it was decided to monitor for any other changes. That evening, and in the middle of the night, she again wanted to sit in the garden. Something was obviously wrong.”

A vet appointment was made, and an extensive examination detected nothing, apart from the fact her pupils did not constrict. With no visible outward signs of anything being wrong, and only that strange behaviour to go on, Hattie’s family suspected she may have ingested some type of drug while on the walk – or that it may be some sort of neurological issue.

“Her normal routine continued, with regular walks. She was eating and drinking normally,” Diana says. “The skittish behaviour stopped completely and it was assumed the potential ‘drug’ diagnosis may have been correct.” 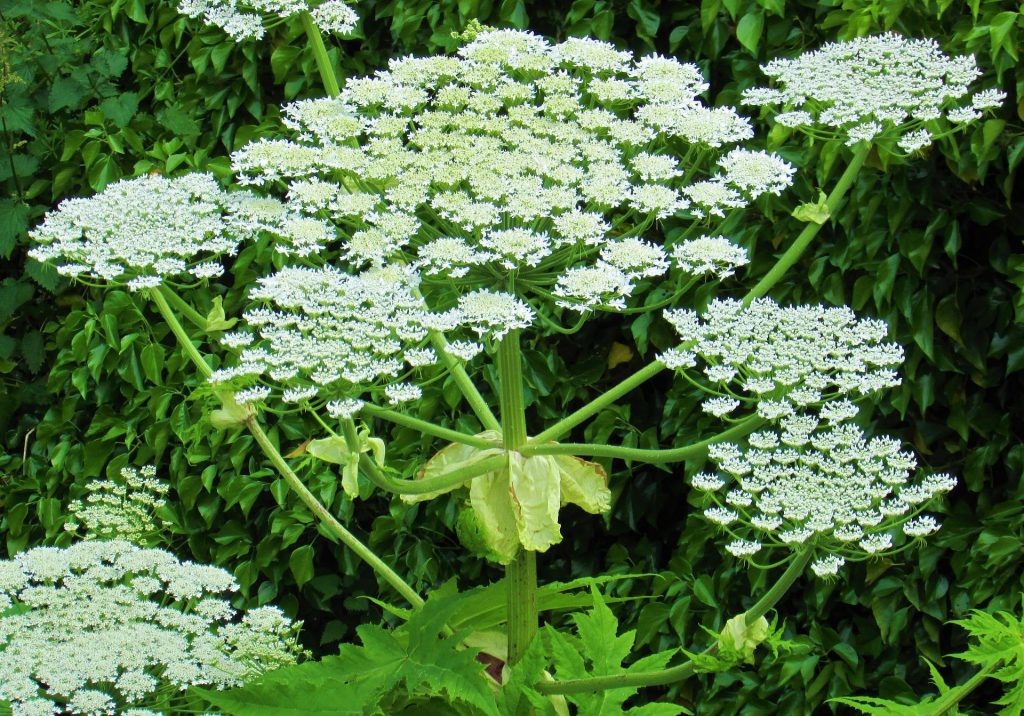 Just when all seemed well, some “grey areas” started to appear on Hattie’s nose – and within twenty-four hours, large blisters appeared all over Hattie’s face in what Diana described as a “disturbing, Alien-like” explosion.

“As the evening progressed this seemed to worsen so an emergency appointment was made. It is quite normal for burns to only appear after two or three days, as sunlight activates the toxin; initially there would be no visible sign of damage to skin integrity,” Diana adds.

“Bloods were taken and an IV dose of Steroid given to Hattie, along with IM antibiotics. She was prescribed Synulox 375mg, twice daily, and Prednidale 37.5mg, once daily. It was agreed to review her in 48 hours, or earlier if the situation got worse. Two days later, topical Isaderm 5mg, followed an hour later by Intrasite Gel, twice daily, were added to the treatment plan. A few days later, she started vomiting, so Zitac – 150mg, twice daily – was included, and the vomiting stopped immediately.” 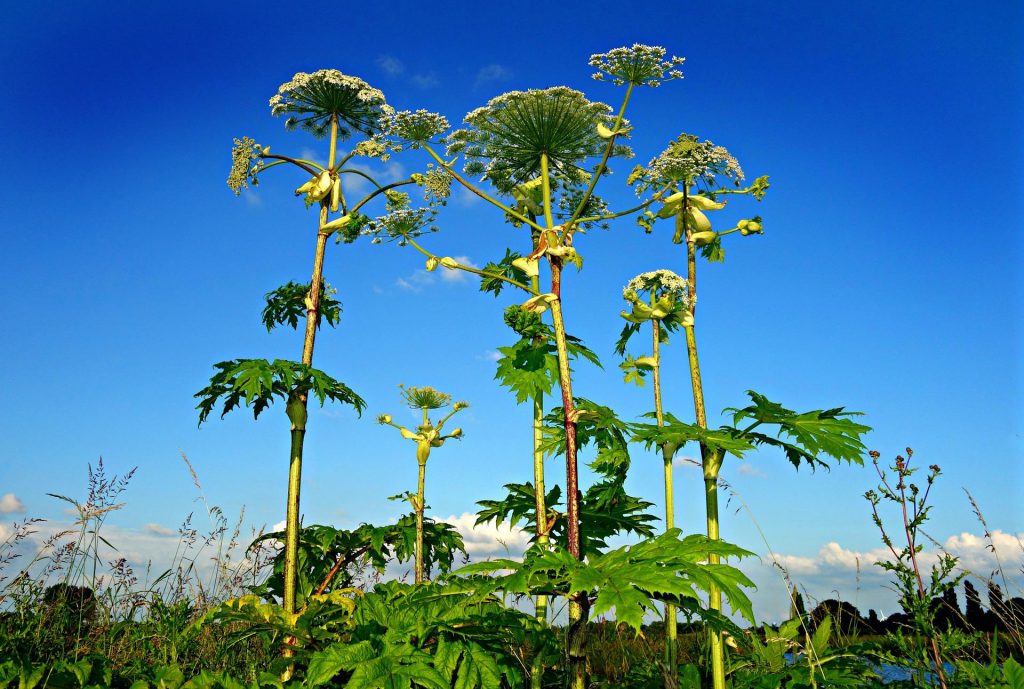 The treatment was effective, and despite some burns being very close to her eyes, Hattie was able to avoid any visual damage.

“Other dogs in the area have had similar blisters, so their vets have been advised this course of treatment has been very successful,” Diana says. “The topical applications were vital to avoid infection and promote healing.”

After Hattie’s harrowing experience, Diana is keen to share knowledge of the damage the giant hogweed can cause pets.

“The toxin is most prolific in the spring and summer. All parts of the plant can cause blisters and burns,” she says. “It is often confused with cow parsley, but the leaves on the giant hogweed are more spikey, with purple blotches on the stem of the plant.
“Councils and landowners are required to destroy the plant, but sadly this does not seem to be happening in many areas.”