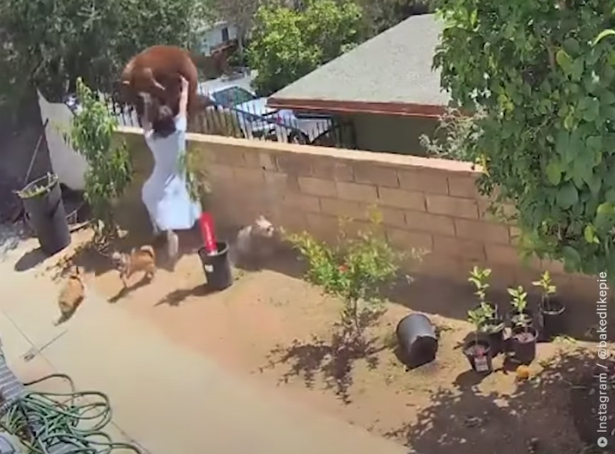 Many dog owners will tell you that they’d be ready to fight off a bear with their bare hands to protect their pets – and on 31 May, a Californian teenager went from words to action.

The seventeen-year-old, identified as ‘Hailey’, at first thought her dogs were barking at a squirrel. However, the situation was far more serious: CCTV footage captured a pair of bear cubs and their mother walking atop a brick fence before the four resident dogs ran up to them barking.

As the cubs clambered to safety, their mother stayed on top of the wall and began to swipe down at the dogs. She was able to grab one of them moments before Hailey realised what all the noise was about and rushed to the rescue without a second thought.

The teenager was able to shove the bear off the top of the fence and run back inside with the dogs. She only suffered a sprained finger and a scraped knee, while the mother bear quickly climbed back up on the fence and walked away from the camera to reunite with her cubs, safe and sound.