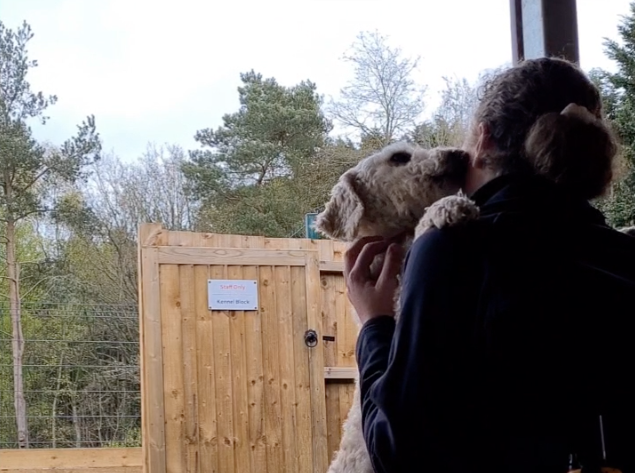 After six years shut inside a crate, a Labradoodle taken in by the RSPCA – whose name cannot be made public due to ongoing enquiries related to the case- moved the rescue centre’s staff to tears after ‘hugging’ one of them.

Signed over to the Martlesham Animal Centre in Suffolk by her previous owners in February, she was not alone: another dog who’d been locked in her same crate was surrendered to the RSPCA the same day. Both dogs were terrified of everything around them.

“Now, when Lucy goes into the kennel this sweetheart rushes forward and puts her paws onto her shoulders; the first time it happened it moved us all to tears.”

Animal centre manager Zoe Barrett said, “Both dogs were terrified when they arrived here. It’s taken our kennel team a long time to gain their trust but they’re still a long way from being ready for rehoming.

“Kennel assistant Lucy has spent a lot of time with them and has seen them come on leaps and bounds, although they’re still incredibly frightened of the outside world.

“Now, when Lucy goes into the kennel this sweetheart rushes forward and puts her paws onto her shoulders; the first time it happened it moved us all to tears. It’s as if she wants to be really close to Lucy and shown love, probably for the first time in her life.”

Having only known life inside a crate for so long, the dogs will need some more work before they are ready for adoption. The centre staff will keep working with the dogs prepare them for life into a loving home.