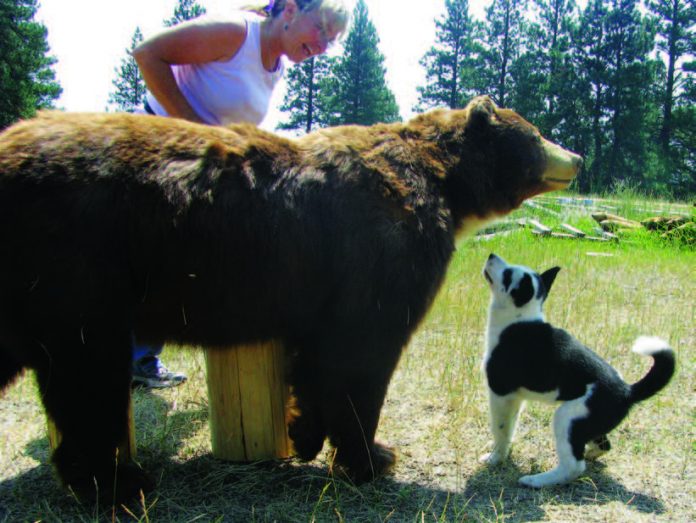 Some people keep dogs as pets and companions, some to show and breed, and others enjoy sports and hobbies with them. Many of the dog breeds kept for these reasons were once used as working dogs and yet, aside from the modern types we are familiar with, such as police dogs and guide dogs, little is known about the fascinating work that dogs are doing, not only for human beings, but also for our planet.

I’ve long been interested in ‘conservation dogs’ – also known as ‘wildlife service dogs’ – having met one of these enchanting canines in the jungles of Belize. This dog had been trained to identify jaguar droppings and was an essential part of a team gathering data on this highly endangered species. While scat sniffing may be an enviable job among dogs, there are many other types of conservation dogs doing incredible things to help protect other species on our planet.

The Karelian Bear Dog originated from eastern Finland and western Russia. Like many primitive working breeds, it was used for a wide variety of tasks, including hunting and vermin control, pulling sleds and also as a protector. These amazing dogs have now landed themselves a new job in a world where saving the planet and the wildlife on it is becoming

more of a priority. One of the biggest threats to wildlife is human encroachment on their territories. The result of this is human-wildlife conflicts, which often end badly for the animal, especially when that animal is very large and potentially dangerous to people.

Through hunting and ‘culling’, thousands of bears are killed every year in the United States. Bears are very smart and also highly food motivated. Once they associate human beings with a source of food, they can become not only a nuisance, but a frightening and dangerous one at that. While bear attacks on humans are rare, they make the news and so people can become very worried when a bear is noticed in their vicinity. 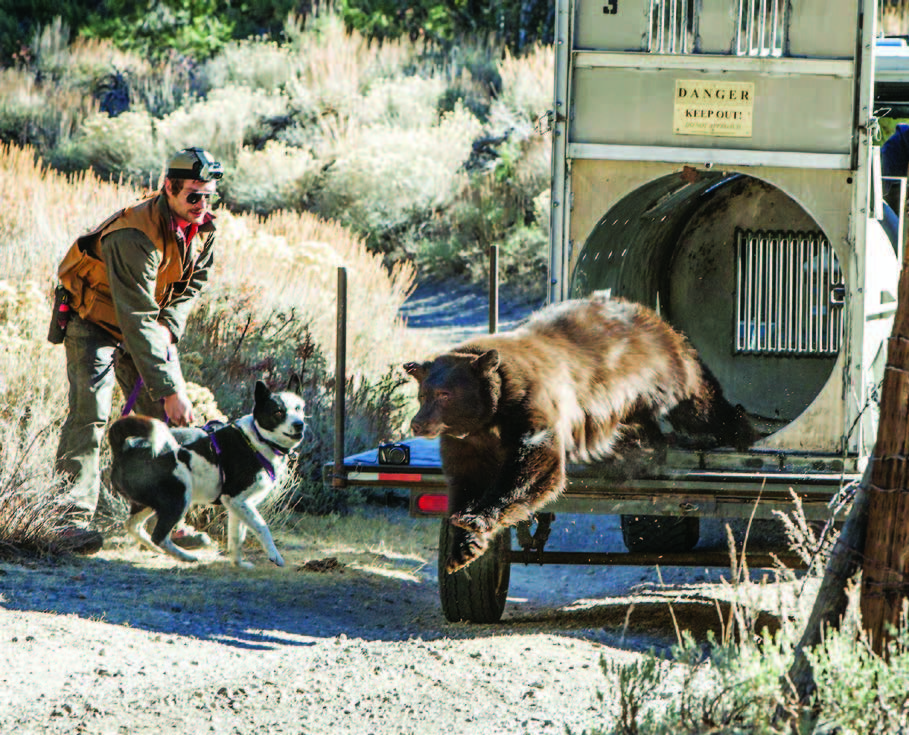 If a bear is deemed a nuisance, the cheapest and most common form of management is to simply shoot the bear. But killing one bear frees up territory for a new bear to move in. So, culling is not a permanent solution. If there is no funding for non-lethal forms of bear management or, if there is no will to use alternatives, continuing to shoot bears in one area can have a significant and negative impact on the area’s healthy bear population, which ultimately hurts the whole ecosystem.

Carrie Hunt is the founder of Wind River Bear Institute and founded the practice of ‘bear shepherding’, which involves using dogs to help teach bears that it would be wise to stay away from human beings and their communities. Carrie and her team work on the principles of the same learning theories used by animal trainers all over the world to quickly, safely and effectively educate bears that they are going to be much happier away from people.

Studies that have been conducted by both Jay Honeyman, a bear-conflict biologist, and wildlife biologist Lori Homstol showed that bear shepherding works by increasing wariness shown by bears towards people without forcing them out of their home ranges as well as making it more likely that bears will retreat when they encounter human beings. Because this programme is implemented with such care and professionalism, in the 20 years that it has been operating, no human, dog or bear has been injured or killed in the process.

Anyone who works with dogs knows that the reward of food is a powerful motivator. So, there is no point in attempting to teach bears to stay away from humans, if humans continue to provide food, through garbage and poor storage. Educating the public and helping them to do this is the most important part of this process. Bear dogs and other non-lethal aversives used by wildlife agents can only be effective if the bear is not unintentionally lured back continuously through careless human behaviour.

Lori Homstol says, “More recent research, as well as our own observations, seem to indicate that much of the reason bears use human developments isn’t necessarily just for food but also for avoidance of predators (larger bears). Teaching bears to be more wary of humans in that context makes sense, but teaching food-conditioned bears to be wary of people doesn’t lower the conflict, as the bear may still be causing property damage or behaving boldly in anticipation of a food reward.”

Once it is considered that bear dogs will be effective, highly trained wildlife agents will bring them in. With their innate drive to track, locate and shepherd bears, the dogs enable the wildlife agents to deploy spray deterrents and rubber bullets. While this may sound harsh to some, it’s a system that has proven to be extremely safe for everyone involved and highly effective.

Bear shepherding provides an alternative for bears and for those in the conservation community to demonstrate that killing wildlife isn’t the only solution to human-wildlife conflict. In fact, Wind River Bear Institute is assisting similar programmes in other countries to manage other species of bear, and the technique has been effective to educate other animals, such as wolves, moose and bighorn sheep. There is definitely an opportunity for research into using this method to protect the many vulnerable, often feared species of large animals in other parts of the world.

Wind River Bear Institute purposefully breeds Karelian Bear Dogs that come from strong hunting lines. All puppies are tested for their bravery with bears, but most importantly the focus is on temperament. Karelian Bear Dogs are never supposed to be aggressive towards humans, making them not only effective workers in the management of bear, but also as ambassadors for wildlife conservation. 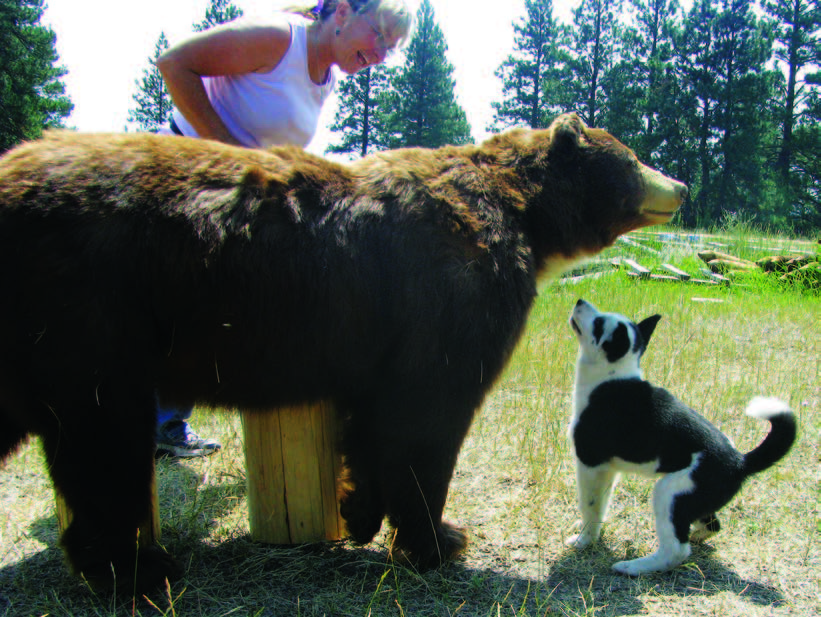 After a period of intensive puppy testing, each dog will be categorised as either a bear conflict dog, which will be placed with a highly trained wildlife agent, or as a bear protection dog, which will be placed with those working in remote locations, where bears and other large predators may be a threat. Puppies that show no drive to hunt or protect effectively will be homed as companions in experienced and knowledgeable homes that can provide for their demands for physical and mental stimulation. They often do go on to be successful at other types of work, such as scent detection. Karelian Bear Dogs should not be considered as pets, as they are highly independent and require a great deal of training to ensure that they do not become a nuisance to their communities, both human and animal.

For the first three months, puppies bred at Wind River Bear Institute are socialised and assessed continuously and intensively. Once that process is complete, formal training begins. This includes learning field commands, tracking both on the ground and in the air, distinguishing the scent of bears, and being able to sniff from a vehicle. A strong recall is essential and all dogs are gun trained. 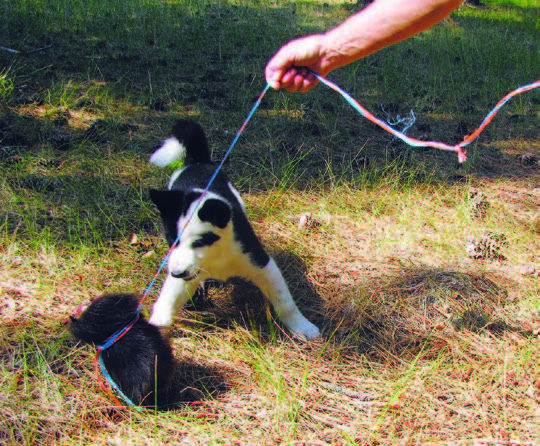 Agents and dogs train for two years before they can work in the field independently, and, by the age of four, the dogs are totally skilled and effective as bear shepherds, even when among distractions such as other animals and humans. Because these dogs are also used for outreach and education, it is imperative that they are well rounded and absolutely safe around adults and children.

So, the next time you get into a discussion about using dogs to hunt wildlife, remember that some hunting dogs and their human companions are hunting to save lives, not to take them.

If you want to learn more about bear shepherding and the Wind River Bear Institute, or you’d like to donate to their programme, visit www.beardogs.org 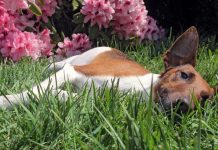 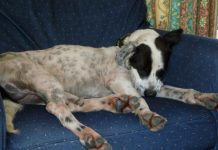 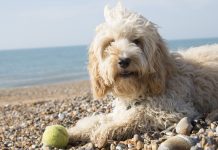