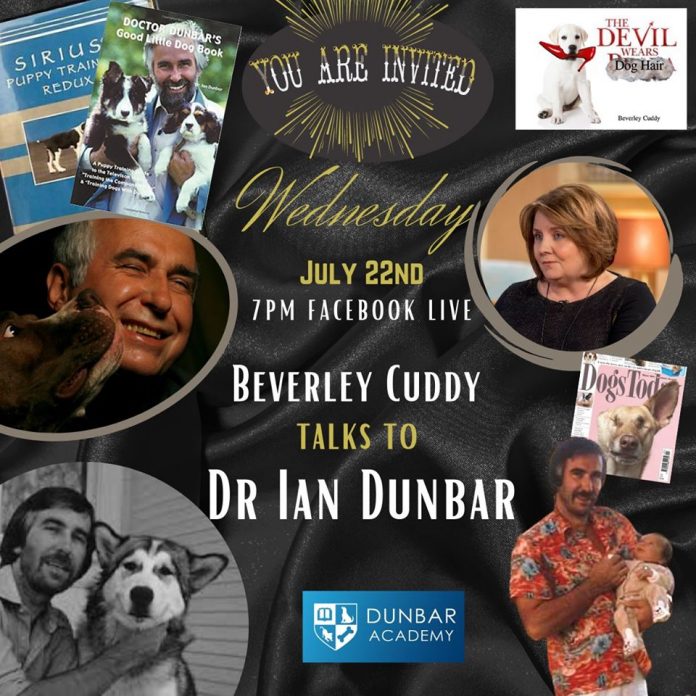 Facebook live coming up! Today (Wednesday 22 July) at 7pm I will be talking with Ian Dunbar – the vet realised he could save many more lives by training dogs and inspiring people to train dogs than he could ever do with a scalpel!

I first met Ian Dunbar around 1985. He’d flown over to the UK and was having lunch at the Kennel Club with the secretary. I’d just started work at the Kennel Gazette and Ian’s articles were the highlight; his wonderful ‘how to train your dog not to sit’ was just mind blowing.

And when he gave me his Sirius Training Video, which was pretty much the start of puppy socialisation and using a lure to get a pup to sit – well, I was dazzled by his shirts, but I became a disciple. I gave my video away to a TV producer who already thought she had the perfect dog behaviourist for her series. Long story short, she too was amazed by the video and Dogs with Dunbar became everyone’s Sunday viewing on prime time ITV!

This British vet realised he could save many more lives by training dogs, and inspiring people to train dogs, than he could ever do with a scalpel. Over the years he’s written for Dogs Today and flew over to appear at the inaugural Wag and Bone Show at Ascot, when my son Kieran was just a baby.

Ian’s son Jamie has been digitising Ian’s brain, and I am very interested in hearing what he’s been up to. He has his own TV studios – so, far from retiring, he’s never been more productive. Well, not since lockdown – he’s been ‘stuck’ in a somewhere that sounds pretty idyllic with a swimming pool…

Can’t wait to catch up with Ian. Will we break the two hour record – remember to join us!

And coming up after Ian we’ve got Jules O’Dwyer – the brilliant winner of Britain’s Got Talent whose life was made a misery when the media decided that having two nearly identical, highly trained dogs was ‘cheating’. They’d not complained that the magician wasn’t using ‘real’ magic or asked those actors who worked with stunt men to give back their Oscars, though!

The interview was delayed due to an unfortunate bout of ill health, but will do ahead next week, Wednesday 29 July) – remember to join us!