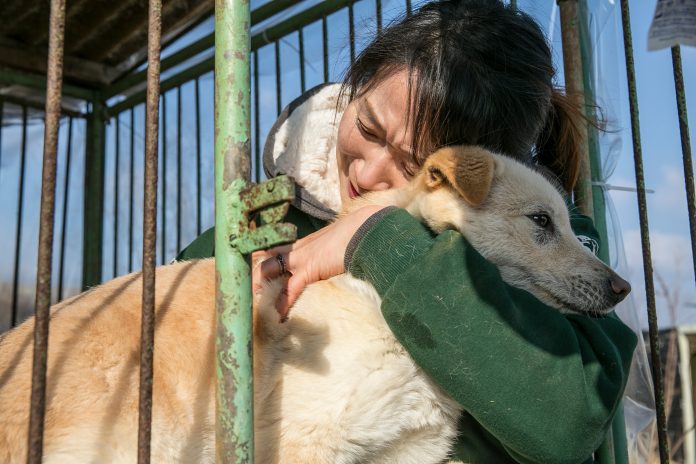 More than 70 dogs from a South Korean dog meat farm are finally being rescued by Humane Society International (HSI) after the Coronavirus lockdown delayed the rescue operation, which had should have been launched in early March.

“International travel restrictions still mean the dogs can’t yet fly to their final destination – Canada and the United States – where they will eventually seek adoptive homes,” a statement reads. “So in the meantime, HSI is relocating them to a temporary boarding facility in South Korea where they will receive veterinary care and loving attention.”

The dogs have a second chance at life following the by the farmer Nakseon Kim’s decision to quit the dog meat industry. Amid growing opposition to the industry in South Korea, as well as a series of crackdowns, more and more farmers are looking to leave this trade. HSI steps in by taking on the dogs, and offering help to start a new, cruelty-free business such as growing crops.

Nakseon Kim said, “I don’t think there are many people in South Korea who are willing to run dog meat farms anymore. There is no future in this dog meat industry. Once HSI helps me close my dog farm, I think I will start to grow crops instead like lettuce, cabbage, or other greens to sell to restaurants. That’s a business with a future.”

This is the 16th dog farm that HSI has closed since its farmer transition program began in 2015, all the dogs will eventually be flown to partner shelters in Canada and the United States to seek adoptive homes.

HSI states, “After years of sending the animals to slaughter, Mr Kim is not the first farmer to be relieved to learn that HSI rescues, rehabilitates and seeks happy homes for all the dogs. He jumped at the chance to leave dog farming behind him when HSI offered to help him start a new life growing cabbages and other vegetables instead.

“Other dog farmers who have exited the trade with HSI’s help have gone on to start new businesses delivery water, or growing mushrooms and water parsley.”

Various breeds were found on the property in Hongseong, including tosas, Jindos, poodles, beagles, huskies, golden retrievers, Pomeranians, Chihuahuas and Boston terriers. As well as the meat trade, the dogs were victims of another abusive industry – puppy farming.

“Despite Korea’s dog meat industry attempting to claim a difference between pet dogs and ‘meat dogs’, the reality is they are all just dogs whose fate ultimately depends on where greatest profits can be made,” HSI states.

Nara Kim, HSI/Korea’s dog meat campaigner, said, “Unfortunately, it is still very common in South Korea to see live puppies for sale in pet shop windows. But what most Koreans will be shocked to learn is that these same puppies could easily have ended up being killed for human consumption instead.”

Nara Kim added, “Whether they live or die, they are all born in this miserable place, their mothers intensively bred over and over until they are exhausted and eventually sold to slaughterhouses. I’m so glad that this nightmare has ended for these lovely dogs, but until the government commits to phase out this dreadful industry, the nightmare continues for millions more.

“As Koreans we need to be their voice and call for an end to the dog farming and dog meat industries.”

Once off the farm, the dogs and puppies will receive veterinary attention for any injuries or ailments.

Dog meat consumption has been steadily declining in South Korea, and is banned or severely restricted in Hong Kong, Taiwan, Thailand, Singapore and the Philippines. In 2018 both Indonesia and Vietnam’s capital city Hanoi pledged an end to the dog meat trade.

Most recently, in April 2020, the Chinese city of Shenzhen banned dog and cat meat consumption – an example soon followed by the city of Zhuhai, following a public statement by the Chinese government that dogs are considered companions and not livestock.