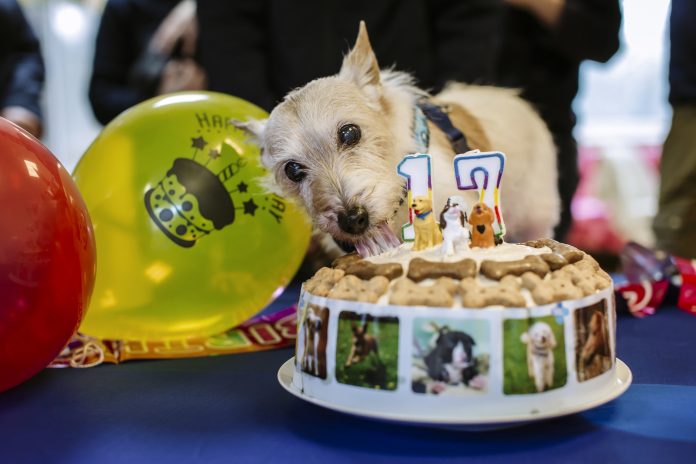 When Sammy arrived at Blue Cross Southampton in 2003, it was clear to everyone that she was horribly in pain. The puppy, found abandoned in a supermarket carpark, needed urgent veterinary care; X-rays revealed her spine was broken in two places.

Megan Baverstock, the rehoming centre’s Supervisor, fostered Sammy herself as her spine healed. It didn’t take long for her to realise that Sammy was never going to leave her. Despite living with mobility issues due to her spine injuries, in the past 17 years Sammy has helped Megan to care for and nurture countless other pets in foster care.

Megan said, “I’d say she has helped kittens the most. Because from being in the home with her and them learning to feel comfortable and confident around dogs, we have been able to easily place those kittens into homes with dogs. When I’ve taken in hand-rear kittens, Sammy has always liked the job of licking and cleaning them.”

Sammy’s contribution to Blue Cross has been celebrated with a party the Southampton centre threw for her 17th birthday. The golden oldie got to enjoy a handmade doggie cake along with other four-legged friends.

Ryan Neile, Head of Behaviour at Blue Cross, said, “In her younger days, Sammy would interact and socialise with many different types of dogs from small to large, but now in her twilight years, she is often called upon to help some of the more nervous, gentle dogs by pottering along with them at a steady pace.

“For vulnerable and displaced pets, that for many reasons find themselves without a home, a foster home can make a crucial difference. What can make an even greater difference is if that home has a friendly and sociable dog that can provide kind of help and support that humans can’t.”

Ryan added, “Sammy’s amazing ability to read, interpret and respond to the subtle body language of other animals makes her the perfect foster friend when it comes to helping scared or nervous pets feel welcomed and safe.

“Like a good role model or coach, Sammy will show and teach other animals how to behave in the world and that things aren’t quite as scary as they seem. This special gift, however simple it may seem, can never be underestimated as a hugely important part of helping Blue Cross pets overcome fears, to socialise and learn new skills.

“Thanks to special dogs like Sammy, we can help prepare the pets in our care for a bright and positive future in a caring home of their own.”