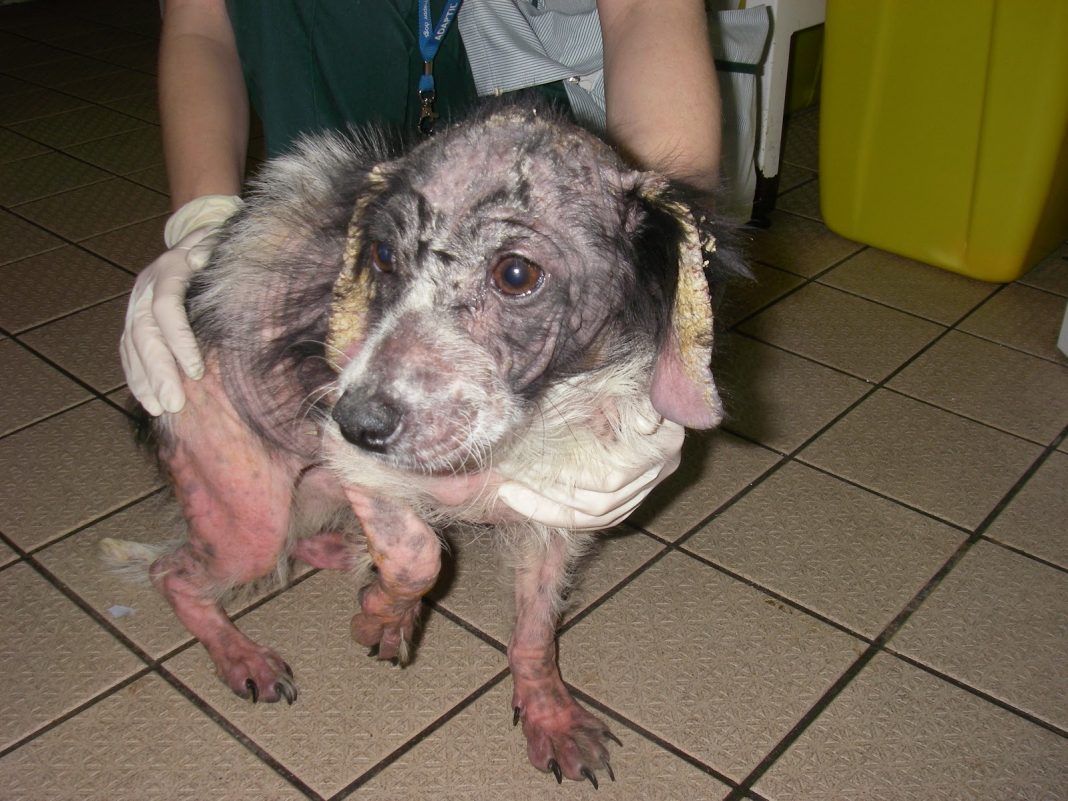 A puppy that was rescued from horrific conditions last year has inspired his owners to run a half marathon for the RSPCA.

On the evening of 9 October 2018, RSPCA Inspector Lisa Lupson responded to an emergency call about a terrified dog that had been abandoned and left for dead in a wooden kennel in a quiet lane in Runcorn, Cheshire.

Even after working for 12 years as an RSPCA Inspector Lisa explained that nothing can prepare you for some of the horrors that the role throws up, and this incident was deeply upsetting. The little dog was discovered amongst her decomposing siblings, she had very little hair on her body due to severe mange and was emaciated.

It was a horrific sight for any animal lover to see and was especially a shock for Lisa’s understanding husband, Mike, “I was a police officer previously so I was always aware of how hard the job is and the risks RSPCA officers go through but when Lisa went to the case of Biscuit and came back to tell me what she had found there – I was shocked. I couldn’t deal with it. It’s just so hard to get your head around how anyone could do that. I just think it’s amazing all the work that the RSPCA do.”

Lisa, a 39-year-old mum-of-two, said, “Even though this poor dog had been through so much suffering, she managed to wag her tail when I showed her some kindness – from that moment I knew a bond had formed. “She was absolutely terrified and shaking, which is unsurprising considering what she had been through, so I was stroking her trying to reassure her. Then I gave her a biscuit and she gave me a little tail wag. I just fell in love – she really made my heart melt.”

This incident inspired Lisa to name her new friend ‘Biscuit’, and she continued to make regular visits to the hospital to check on the pup’s progress. Five months later and Biscuit is very much a part of the family now. She happily lives alongside their other dog Tilly the Labrador and their two children, who also love her.

Mike recalls that he knew it was inevitable Biscuit would be coming home with them. He said, “Even with all Lisa’s experience as an inspector, seeing Biscuit in this state was still a shock to her. I’ve never known her to get upset about her job – when you deal with these horrible things day in and day out you learn to cope with things in your own way – but she was upset about Biscuit. They really connected so she was always going to come home with us.”

Mike and Lisa, who live on the Wirral, have two children Olivia, six, and Thomas, eight, and their menagerie of rescues including Biscuit, Tilly the labrador, Poppy the cat and Hagrid the hamster.

Mike, who works as an Operations Manager for the Ombudsman, continued, “Biscuit has completely changed over the last few months. For a start, we now know she’s a Spaniel-terrier cross and all her fur has grown back. She was a little wary of me at first and a lot calmer with Lisa and the kids, so we thought perhaps whoever was responsible for her abuse was a man but over time, she has learnt to trust me and will now sleep on our bed. It’s lovely to see the change in her.”

Both Mike and Lisa will be taking on the London Landmarks half marathon, which will be taking place this Sunday, 24 March. The marathon starts at Pall Mall and finishes in Downing Street with a fantastic route of iconic London landmarks along the way. The runners will be able run down the streets of where the RSPCA first began – almost 200 years ago!

For more information about this, or any other fundraising challenges for the RSPCA, visit the events website.

To help support Mike and his challenge, sponsor him at his Just Giving page.

The person who abandoned Biscuit and her siblings has not yet been traced. The RSPCA made another appeal for information last week (Wednesday 6 March) on BBC’s Crimewatch Roadshow.

If you have any information, or saw anything suspicious on Tuesday, October 9 between 6pm and 7pm on a path running off Grange Road and Grange Road North in Runcorn call the RSPCA appeals line on 0300 123 8018.