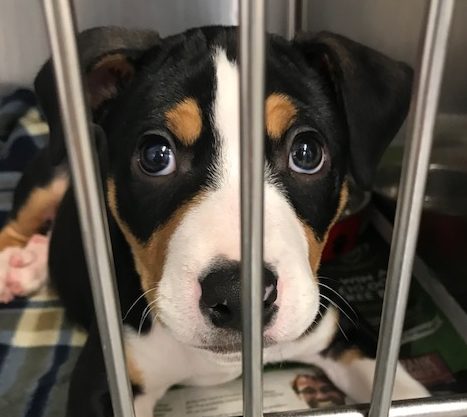 The RSPCA are asking the public to support their Delivering Kindness at Christmas campaign to help pets over Christmas – like two dogs who were dumped in the cold just before Christmas last year, but are now thriving in new homes.

Animal Collection Officer (ACO) Heather Cook collected little Elfie and agreed to wean him so he would be ready for rehoming, but it was soon clear he wouldn’t be leaving her side.

“It was bitterly cold and icy,” ACO Cook said. “The weather was treacherous. It’s a miracle that little Elfie – who should have still been cuddled up to his mum and siblings – had survived outside in those temperatures. I took him home to wean him, but it soon became clear he wouldn’t be going anywhere.”

This winter Elfie will be spending Christmas with Heather and her family as well as their other rescue, a Bulldog named Roxi. The children adore the rescue puppy, as does Roxi. The two dogs have created a special bond and are described as inseparable.

“He loves to be snuggled up to you – and that’s exactly where he’ll be this winter.”

Another puppy dumped in the cold last winter is Bandit, who was found on a frosty morning in London, just a week before Christmas. Only three months old, Bandit was abandoned in a pet carrier, wearing a knitted jumper. He was not microchipped and had no ID tag, so he spent Christmas getting the kindness and care he needed in the RSPCA London Hospitals.

RSPCA Inspector Mike Beaman, who collected little Bandit, he said, “The puppy did not appear to have any health issues and was in good bodily condition, and first impressions were he had been a well-looked after puppy before he was abandoned. Whoever had owned him before had obviously spent money on buying him a coat and carrier and lead and collar, so it will remain a mystery as to why he was abandoned.

“Leaving a tiny puppy alone in the middle of street on such a freezing cold night is so irresponsible. Whatever reason, there is absolutely no excuse.” While he was warm, well-fed and taken care of, the charity hospital was no place for a puppy at Christmas. However, this year Bandit will be spending the holidays with his new loving family in Hertfordshire. Now named Billy, he will celebrate with owner Lulu and her six other dogs.

Lulu said, “He’s such a great dog. He’s scarily intelligent and puppy training went well – although we did spend a lot of time on the naughty step! He’s so cheeky and he’s always getting into mischief – but he’s wonderful.

“We can’t wait to spend Christmas with him – we’d never be without him.”

Thankfully, both dogs had a happy ending – but the RSPCA are asking animal lovers to help provide a warm safe bed, food and care to thousands more animals like them who could be facing cruelty, neglect and suffering this Christmas. You can support their campaign Delivering Kindness at Christmas or donate by stocking the sleigh, providing necessities to the dogs already in care.