A Military Working Dog has received the animals’ Victoria Cross for his remarkable actions when when serving with the Special Air Service Regiment (SASR), in 2011.

Belgian Malinois Kuga is the first Australian dog to receive the PDSA Dickin Medal, the highest award any animal can achieve while serving in military conflict. He was recognised for his actions during Operation Slipper in the Khas Uruzgan district of Afghanistan.

There’s no doubt in anybody’s mind that he saved lives. He just wouldn’t give up on his mates and doing his job

PDSA Director General Jan McLoughlin said,“Kuga’s actions undoubtedly saved the lives of his patrol. He took on the enemy without fear, saving his comrades despite suffering serious injury, and is a thoroughly deserving recipient of the PDSA Dickin Medal.”

Kuga was born on 23 April 2007 and began training with the SASR aged eight months, in January 2008. He was teamed with his handler in April 2009 and, in June 2010, they were deployed to Afghanistan on their first tour, where he was recognised for his courage.

During their second tour on 26th August 2011, Kuga and his handler were part of a Special Operations Task Group (SOTG) conducting a mission to capture a senior Taliban insurgent in the Khas Uruzgan district. The unit began their patrol after landing by helicopter near a target compound.

Kuga and his handler were located next to a river, and he was instructed to search for concealed insurgents or improvised explosive devices (IEDs) located along the river’s edge. As the patrol continued to move closer to the target compound, Kuga indicated an enemy presence and moved down towards the river.

Undeterred by the close-range fire he was becoming injured by, Kuga swam towards the opposite river bank with his handler moving into position to support him. After reaching the bank, he charged towards a small tree line where his handler was able to identify the enemy’s location and witnessed an insurgent firing at Kuga at close range.

Despite his injuries, Kuga swam back across the river when recalled by his handler, who performed emergency first aid and requested a helicopter medical evacuation for him. Kuga was treated in Afghanistan and Germany, before returning to Australia for further treatment and rehabilitation.

Brave Kuga passed away in kennels on 24 July 2012, although inconclusive, it’s believed his body succumbed to the stress from the injuries caused at the incident and his death is officially recorded as ‘Died of Wounds’.

Corporal Mark Donaldson VC accepted the award on the regiment’s behalf, along with Kuga’s canine colleague and retired Militairy Working Dog Odin. Corporal Donaldson said, “Kuga’s actions that day in Afghanistan were heroic. There’s no doubt in anybody’s mind that he saved lives. He just wouldn’t give up on his mates and doing his job.

Kuga is the 71st recipient of the PDSA Dickin Medal and the first Australian dog to receive the honour. Previously, two World War II messenger pigeons serving with the Australian signals Corps were awarded the Medal in February 1947 for their role in Pacific operations. 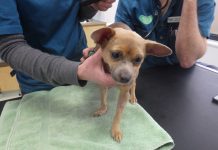 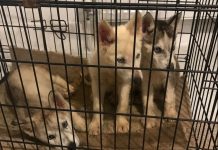 Husky puppies abandoned in filthy crate by road in Kent