After Sugar, a lively Westie, collapsed on a walk with her owner Gary, he rushed her to Sheffield PDSA Pet Hospital – where she was diagnosed with Addison’s Disease.

The adored, energetic pup came bounding into owner Gray’s life after sadly losing his 15-year-old Westie to stomach cancer. Sugar has been his companion for the past six years.

“I was taking her for a walk to my son’s house down the road when she just collapsed,” said Gary. “I had to pick her up and carry her and knew something was desperately wrong.”

Gary took her to Sheffield PDSA Pet Hospital, where vets gave her IV fluids and carried out blood tests before diagnosing her with Addison’s Disease. The disorder prevents the adrenal glands functioning properly leading to severe problems. Without treatment, it can be fatal.

Rob Haselgrove, Senior Vet at Sheffield PDSA Pet Hospital, said, “Sugar was very poorly when she first came to see us. She’d stopped eating two days earlier and had been vomiting prior to being admitted.

“We stabilised her and the blood tests we carried out later confirmed she had Addison’s Disease, a condition that affects hormone levels in the body. When sufferers are having what’s called an Addisonian crisis, where hormone levels get dangerously out of control it can be very serious, but, with careful management, Sugar can still have a good quality of life.”

Gary, who was a full-time carer for his wife Lesley until she passed away last year, said that Sugar “means the world” to him and his daughter Catherine.

He added, “When Sugar became ill we feared the worst and my daughter was really upset. When the vets told us it was Addison’s it was a huge shock, I’d never even heard of it before. We were told she would need daily medication and a monthly injection to keep it under control but it’s not an inconvenience to me. She’s part of the family and I would do anything for her.

“I was a carer for my wife for seven years after she suffered a stroke and lost control of one side of her body. Sugar loved her and would jump up on the bed just to be with her. When I lost Lesley it was devastating but Sugar has always been there for us and is a great companion.”

If you’d like to help, you can sponsor Sugar and meet other pets that are part of the PDSA’s Sponsor Me Better sponsorship program. 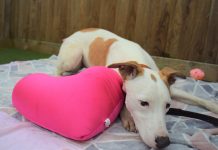