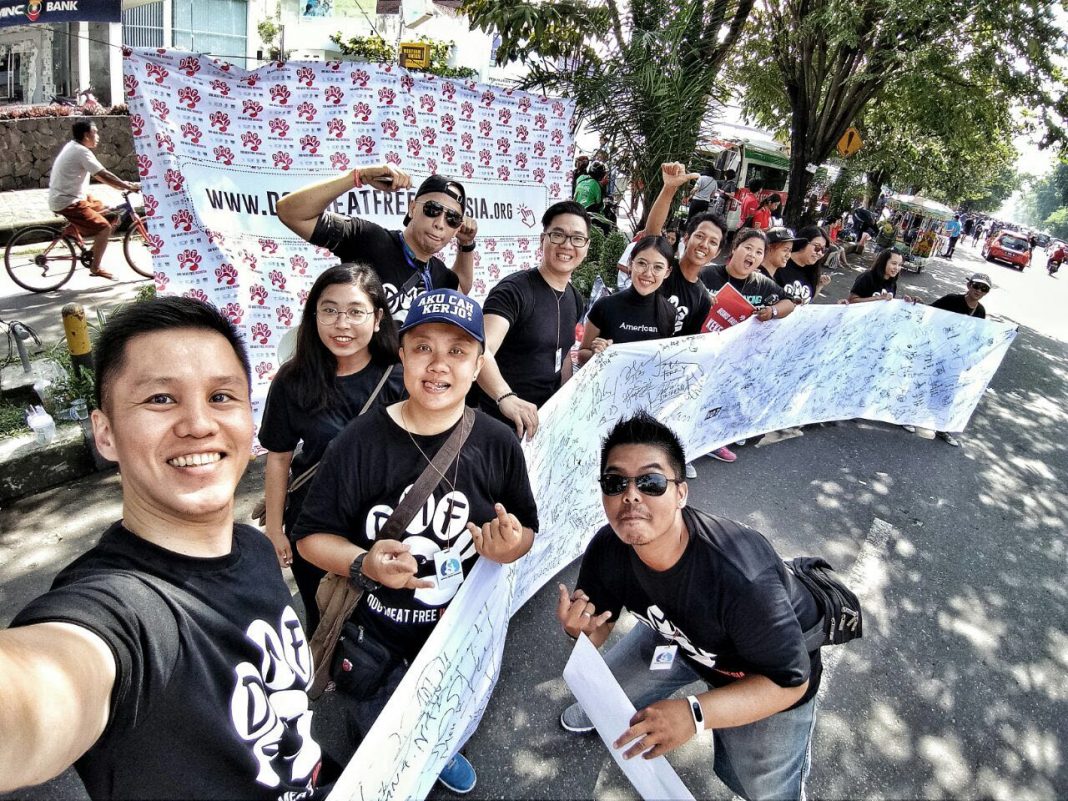 Bobby Fernando, of Animal Friends Jogja, said, “This is such a victory for Indonesia and the Indonesian government has given us hope and motivation to collaborate with the government. We are one step closer to a dog and cat meat-free Indonesia!”

The announcement came at a National Coordination of Animal Welfare meeting in Jakarta, held by the Directorate of Veterinary Public and attended by national and regional government representatives. At the close of the meeting, all national participants agreed to issue a ban on the trade of dog and cat meat in Indonesia – and to prohibit the issuance of health certification for dog and cat meat for human consumption. Mr Syamsul Ma’arif DVM , M.Si , Director of veterinary public health, described the trade as “torture for animals” after reviewing DMFI’s investigation footage into the trade – detailing the cruel living conditions, risk of disease to humans and the widespread theft of pets to be sold on as meat animals.

With two weeks to go before the country hosts the 18th Asian Games, he also acknowledged the risk the trade poses to Indonesia’s international reputation, warning that “foreign countries find a low standard of animal welfare and cruelty unacceptable and will stop visiting Indonesia which is very bad for our tourism”.

He added, “Dog meat, or any animal that is not registered as farm animals, is illegal.” Lola Webber, Director at Change For Animals Foundation, said, “The extreme cruelty of Indonesia’s dog and cat meat trades is intolerable under both Indonesian and international animal welfare standards, and the government is right to be concerned about the impacts of these trades on its international reputation.

“With our growing awareness of animal sentience comes a greater responsibility to protect animals from cruelty. Customs evolve and the nationwide movement from within Indonesia calling for an end to these trades is proof that Indonesia is ready to banish the dog meat trade to the history books of shame and illegality. This latest announcement will be celebrated globally!” “The dog and cat meat trade is utterly brutal, a risk to human health and largely fueled by crime, so we applaud the Indonesian government for pledging to end the trade following our DMFI investigations. We hope that this bold step will send a strong message to other countries across Asia, such as China, South Korea, India and Vietnam where 30 million dogs and 10 million cats suffer unimaginable cruelty for the meat trade, many of them stolen pets. “We stand ready to work with the Indonesian authorities to implement a robust ban, end the slaughter, and bring us one step closer to shutting down these dreadful trades for good.”