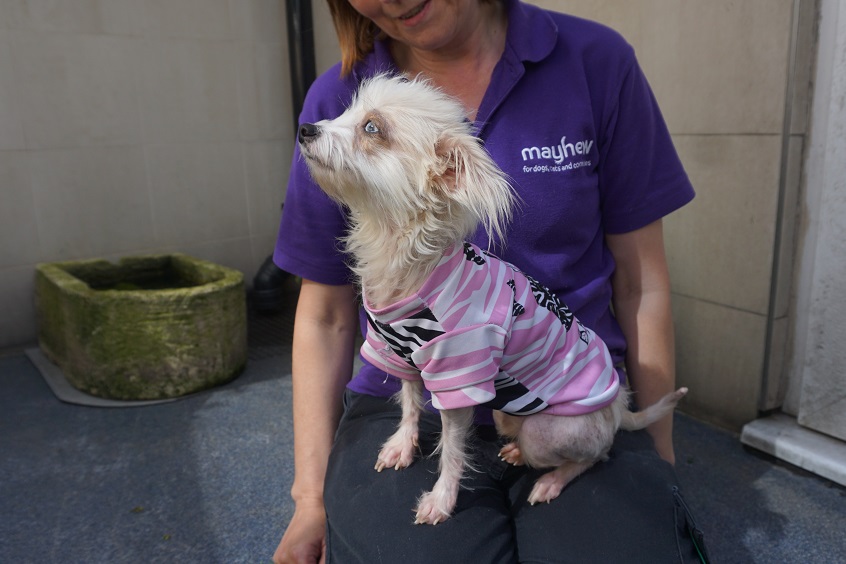 A three-year-old crossbreed was found straying at Roundwood Park in Brent, North West London, wearing a t-shirt in almost 30 degree weather – as well as a collar with no tag. The dog, since named Frizz, was taken to animal welfare charity Mayhew to receive veterinary care.

Mayhew’s Head of Kennels, Janet Nobbs, said, “There are many risks and dangers for an animal roaming the streets on their own, whatever the weather, but it was almost 30 degrees that day, and when I took off Fizz’s T-shirt I could feel the heat coming off her body. “She was thin and losing the fur on her rib cage, all the way down her back legs and her tail. There were scabs on her chest and tummy where the skin had become really sore and her front legs were pretty much bald. Although she was very timid, she seemed happy to be picked up. I could tell she was grateful to finally be safe and she knew we were here to help her.”

In addition to having no tag, Fizz wasn’t microchipped – something that kept Mayhew from identifying the owner, and led to speculation she may have been abandoned. Nobbs added, “We strongly advise all pet owners to have their animal microchipped to significantly increase your chances of being reunited should the unthinkable happen and your pet becomes lost or is stolen.

“After a week with us, Fizz began to look a lot better. She was gradually feeling more comfortable eating as she got to know us, her skin was healing nicely and her fur was starting to grow back.”

After being treated, neutered and vaccinated, Frizz quickly found a forever home.