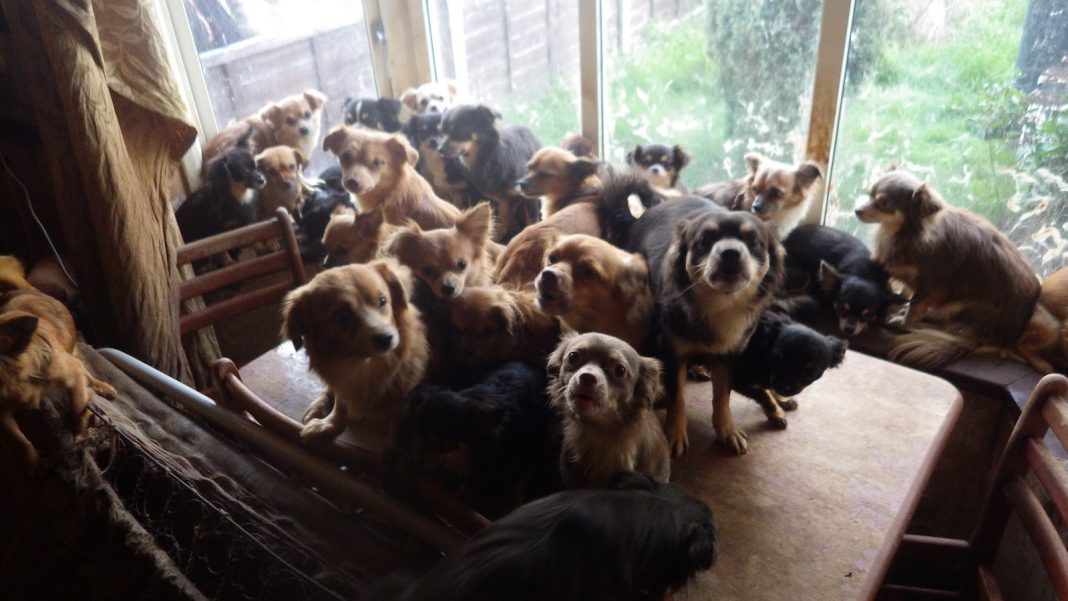 The amazing rescue of 82 Chihuahuas from one home in Birmingham will be broadcast as part of Channel 5’s new series of The Dog Rescuers tomorrow, 27 June, at 7pm.

RSPCA Inspector Herchy Boal was on duty in Birmingham when she was called by police who were investigating the death of a woman on a quiet Sunday in April last year.

“The officers asked us for help with around 30 dogs but I was busy dealing with another emergency elsewhere,” she explained. “When they called me again a few hours later they were extremely concerned about the conditions they had found the dogs in, claiming they believed there were actually in excess of 40 small breeds. “When I arrived at the property I found 82 dogs inside. They literally started appearing from everywhere. We would move the washing machine and suddenly there’d be six faces looking at you. It was incredible where they were able to hide. The house looked like an earthquake had hit it, everything was higgledy piggledy, it was really chaotic and dirty.

“We called out a vet who said the house was too hazardous and the dogs couldn’t stay there, it was filthy and cramped. They were all hiding; barking and snapping at us.”

All 82 dogs were removed and taken to the charity’s Newbrook Farm Animal Hospital in Birmingham.

Inspector Boal said, “We didn’t finish work until 11am the next day!”

It transpired that the woman who died at the property had passed away from complications after an accident.

“The woman and her husband, Stephen, had started out with two pet chihuahuas – Blue and Tinkerbell. Unfortunately, they didn’t get their dogs neutered and four years later, they had 82 dogs!” Inspector Boal said. “This was a classic hoarding situation but it was clear the couple had loved their dogs and things had simply got out of hand.

“We worked with Stephen to renovate and clean the home while we cared for the dogs. We returned four of the dogs to him and rehomed the rest.

“Two of the dogs that went back to Stephen had serious behavioural issues and were extremely aggressive and unhappy. We were seriously considering our options with them because they were completely unhandleable. But when we returned them to him they were like different dogs and were so much happier.” All of this could have been avoided by neutering the two original pets, which is something RSPCA is trying to promote among dog owners in order to avoid unplanned litters.

Inspector Boal added, “I really hope we can use this story to make it clear why it’s so important to neuter your pets not only to avoid unwanted litters but also to avoid inbreeding which can result in serious health and behaviour problems in puppies.”

The same episode will also feature the story of Teddy, a Schnauzer/Poodle cross who helped the recovery of his owner Andy Szasz when he was put into a medically induced coma in December 2016. His wife Estelle believes that hearing Teddy’s bark encouraged her husband to wake up three days earlier than expected. Andy said, “She put Teddy on my chest and he woke me up. In a way I think he is my guardian angel.

“Once I left hospital, without this little man getting me fit afterwards I don’t think I would’ve made it. He gave me the encouragement to take him for a walk three or four times a day.”

Andy is hoping Ted can become a therapy dog, visiting people in the hospital a few days a week.

“Seeing a little dog in hospital is a great way to help make you feel better,” he said. “So taking Teddy in to cheer up patients would be our way of repaying the wonderful care I received during my own stay.”