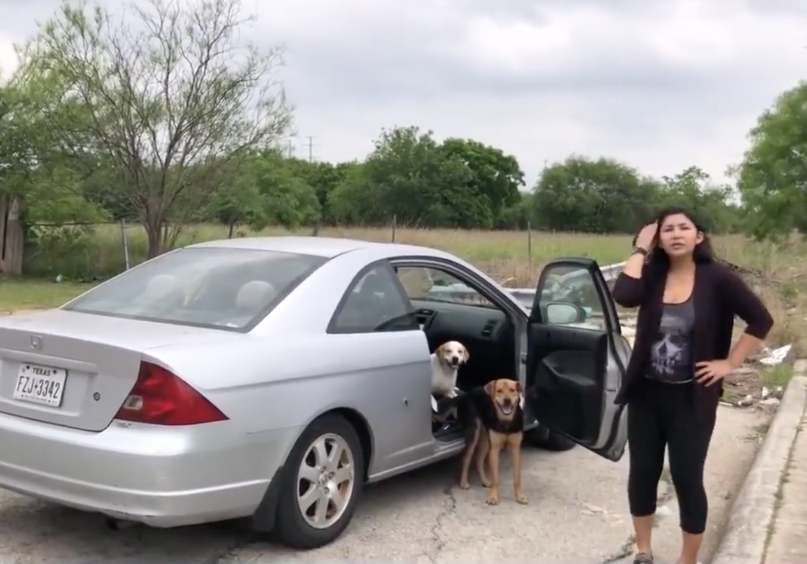 The video of a woman abandoning four dogs at a vacant lot in San Antonio, Texas, has gone viral and caused widespread outrage. In the video, taken on Friday 13 April by a local resident, she is spotted forcing her four dogs out of a car. The resident who took the video can be heard repeatedly asking her not to dump the dogs in the street, and giving her directions to take them to the nearby Animal Care Services (ACS).

“I mean, you can tell they’re scared, they don’t want to go,” she argues. “They don’t know how to fend for themselves.”

Leaving a pet in the care of ACS is free, whereas there is a fine for abandoning dogs – and yet the woman chooses to ignore all advice and is seen getting back in the car after forcing all dogs out of it. The driver then speeds away from the lot, leaving all four dogs behind.

ACS was notified of the situation, and stepped in to help.

“We received a message from a good Samaritan regarding a couple dumping 4-5 animals on a nearby street and driving off,” a statement reads. “Thanks to this good Samaritan catching the act on camera, contacting 311, and caring for these pets – our Animal Care Officers were able to rush to the scene and bring three of the dogs into our care.

“These dogs have clearly had a very rough day. They appear to be friendly, seem to get along with each other, and most importantly, are in need of love and proper care. If you are able to open your home for at least one of these dogs by either adopting or fostering, please reach out to us.” The fourth dog was reportedly brought to ACS later, by the same woman who abandoned them, after the returned to the lot where she’d left them and found him still wandering close by. According to ACS spokesman Lisa Norwood she turned herself in to the authorities, and may be facing charges for each dog abandoned.