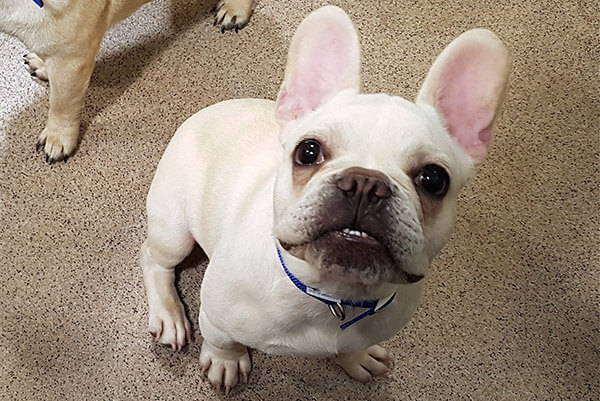 Battersea Dogs and Cats Home has revealed the strangest names pets have been coming through the charity’s doors with this year, as well as the most common ones. With more than 3,600 incoming dogs and cats each year, Battersea is able to spot fashionable trends in naming pets – and spot some real one-offs!

The weird and wonderful names for dogs this year have tended towards food trends, including Wasabi (the French Bulldog pictured above), as well as tasty snacks Nacho, Poptart and Popcorn!

The winning weird name was Black Trouser, a black mongrel who was later renamed Fudge and has since found his new owners.

Captain Gary Ziltoid was another memorable name for staff, given to an eight-week-old puppy who arrived at the centre in March. Peewee’s name was actually quite fitting; at just 2.8 kilos, this Jack Russell was one of the smallest dogs the charity took in this year.

By contrast, the top five most popular male dog names in 2017 at Battersea are Max, Alfie, Rocky, Buster and Charlie – while Bella, Roxie (or Roxy), Rosie, Coco and Daisy topped the list for females.

Battersea Dogs and Cats Home’s centre manager Robert Young said, “Our staff name all the strays that are brought into Battersea – but two thirds of the dogs and cats that arrive here are brought in by their owners, who can no longer look care for them. These pets already have names of their own, and we’ve certainly seen some unusual ones over the years- including a Staffie named Lord Farquaad and a cat called Beetlejuice. Considering we care for more than 7000 animals each year, it’s inevitable that there will be a few quirky names among them and we’re always on the lookout for the next unusual entrant.”