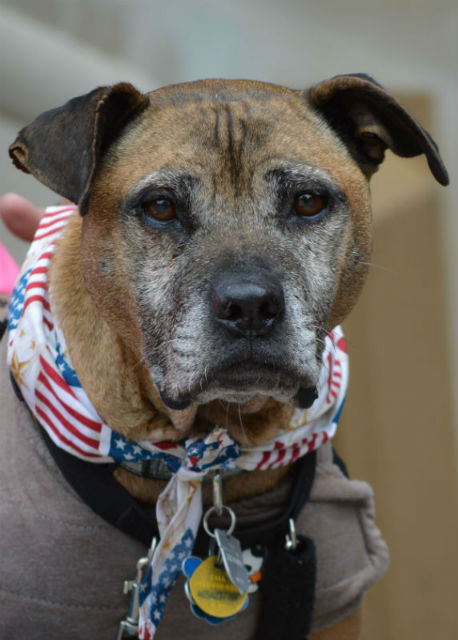 I recently read an editorial in the paper that said that Pit Bull types are inherently dangerous. That even if they weren’t aggressive towards people, they are always a danger to other animals.

My response to that claim is pretty simple: one of the reasons animal lovers were so distraught by the Michael Vick case was because he killed dogs, some in horrific ways. These were fighting dogs, from fighting dog bloodlines, and fighting dog kennels, trained from birth to fight. They came from generations of dogs who had been bred specifically for the pit. Why did Mr. Vick kill them? Because they wouldn’t fight. Dogs who were bred for dog aggression refused to attack other dogs.

It’s hard to argue that pit bull terrier type dogs are always animal aggressive when so many wonderful dogs are living safe and happy lives in families with children, dogs and other animals

Many people who have opened their homes to Pit Bull types describe them as fun loving, energetic, athletic, hard-working, loyal, affectionate, sometimes destructive, and tenacious. It’s hard to argue that Pit Bull types are always animal-aggressive when so many wonderful dogs are living safe and happy lives in families with children, dogs and other animals.

I decided to do some research and I read some really interesting papers on nature vs nurture. A dog of any particular breed is a sum of genetics, temperament, experiences and environment. My daughter and I had sister Labs, from the same litter. We would take them to the river for retrieving practice. Lucy swam like a seal, with little wake or water motion. All you would see is her head and the tip of her tail, almost floating in the water, moving gracefully and efficiently toward shore. Layla, on the other hand, swam as if she were in a panic. Both of her front legs would break free of the water and she would thrash her way back to the beach. These two dogs shared genes and background. One was born with a genetic tendency to swim, the other was not. With time Layla became more skilled at swimming as she gained more experience. But she had to learn what Lucy instinctively knew.

But tendency is not behavior. It is not destiny

Kenth Svarberg and Bjorn Forkman studied 15,000 dogs from 164 different breeds. What they found was that dog behavior varied widely, even within the same breeds. A specific breed of dog may be born with a tendency towards a certain behavior. Border Collies have a tendency to herd. But tendency is not behavior. It is not destiny. A dog is the sum of his personality, his experiences and his environment. A responsible owner is attuned to his or her dog, and his tendencies. If you know your dog has an issue with horses, you don’t take him to the rodeo, right?

It is up to us to train and socialize our dogs so aggression is not an issue. And if an issue starts to crop up, we need to seek the assistance of a trained behaviorist before the undesirable behavior becomes ingrained. A respectful owner reduces stressful triggers and doesn’t allow his dog to learn or practice aggressive behavior.

If you believe that Pit Bulls, dogs who may not have any common DNA, are inherently dangerous, you are saying that how a dog looks determines how he will act

Even if there was a gene for animal aggression (and there is not), there is another problem. Pit Bull types are the most genetically diverse group of dogs ever. Two dogs who are both identified as Pit Bulls can share absolutely no breed DNA. Many of them are nothing more than mutts, the result of several different breeds of dog. Ray and Turtle are a case in point; they are both identified as ‘Pit Bulls’, but they are incredibly different. Even their body shape and mass is different. The only things they share in common are big wedge-shaped heads and short hair. If you believe that Pit Bulls, dogs who may not have any common DNA, are inherently dangerous, you are saying that how a dog looks determines how he will act.

Ray can have an issue with an unknown dog if he feels the dog is focused on him. Today we went to the Welcome Center to pick up a couple of things at the gift shop. The Welcome Center dog was sprawled sleeping in the middle of the floor. Ray walked within five feet of her without any adverse reaction at all. Because we are constantly reinforcing good behavior Ray is learning how to peacefully co-exist with other dogs. Ray received instant praise and got to go over and pick a toy right away. We are changing Ray’s tendencies, by giving him new experiences that over-lay the old bad ones.

Is it nature or is it nurture? As with any dog’s behavior, it is a combination of both. And as responsible owners we learn to manage our dogs and their behavior. We learn to control their environment.