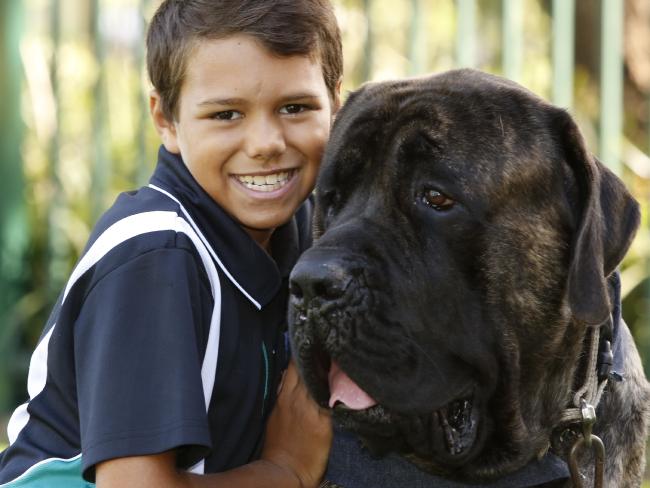 Having already been noted as one of Australia’s biggest (and perhaps gentlest!) dogs, Baron the Mastiff is making headlines once again as he embarks on his new career as a therapy pet. As part of the Nepean Therapy Dogs network, Baron enjoyed his first day ‘on the job’ at Penrith Valley School in Werrington and could soon be their most popular visitor. It turns out that the giant canine, who weighs in at a staggering 115 kilograms and stands more than two metres high from nose to tail, is a bit of a softie deep down, loving nothing more than being the centre of attention.

The Rouse Hill Times revealed Baron as being Australia’s biggest dog last September, which resulted in his owners, Mark and Dorothy York, becoming both national and international stars with cameos on Better Homes, Gardens and Channel 9’s Today Show. Since Baron’s meteoric rise to fame, his owners have enrolled the two-year-old canine in the Nepean Therapy Dogs (NTD) programme, which will see their wonderful dog visit schools, hospitals and care homes to help young children build their confidence.

Staff at Penrith Valley School, which specialises in dealing with children who have both behavioural and emotional difficulties, have said their students love the therapy programme which began last year. Nicholas Danta, the school’s principle, told the Daily Telegraph, “The therapy dogs visit us every Friday and its really going well. It’s fantastic for the students who read to the dogs because they (the animals) are not judgemental. Also, there is no pressure on the children while if they read to adults, they (the students) could shut down. Basically, a lot of the kids here have experienced a lot of trauma and our school helps them feel safe and cared for.”

Baron – whose weight is equivalent to that of a professional rugby player – really is a gentle giant, as Dorothy York reiterates saying, “Baron gets along with everyone. He’s still growing and should become bigger and broader in 12 months time but will not get taller. He is unofficially Australia’s biggest dog and eats one kilo of beef or chicken in the morning along with biscuits and the same again at night.

“Baron is very relaxed and there are no dramas with the children who enjoy reading to him. I probably get as much out of Baron’s therapy work as the kids who love him. To see the kids interact with him specially as some of them don’t like to read, is wonderful to see.”

Nepean Therapy Dogs is a not-for-profit organization that works with children in palliative care, victims of crime, medical facilities and aged-care. They also engage in a volunteering programme that sees 30 volunteers – some of whom have their own challenges – help and assist in taking therapy dogs to their scheduled visits.

“Some of our volunteers such as people with autism may not be able to go out in public, but work very well with taking the therapy dogs for visits,” said Timothy Smith of the NTD group. Nicole Celeban, President of NTD, told Daily Mail Australia that Baron was just ‘a big hulking ball of marshmallow’ despite being the size of a baby elephant and measuring in at a staggering 6 foot 6inches tall.

“He’s there interacting with the children, helping them with their reading programs…just being lovable and being there to be hugged. This particular school is a school for children from disadvantaged backgrounds…It’s a reward system for the children for good behaviour” said Celeban.

Baron will continue to get bigger until he reaches the age of four, by which time he may even be a contender for the world’s heaviest dog too – a title currently held by a 127.5-kilogram US mastiff! Baron’s owner Mark said he spends more than $200 a week feeding their voracious animal a mountain of food.

He must be feeding him something right though, seeing as he shared the best junior dog award at the Royal Melbourne and first place at the Sydney Royal Easter Show. Although Mark doesn’t want him to get too big headed just yet, he says, “Every morning when we come downstairs he greets us with the zoomies and spins around in circles. He is just a big soft baby boy. A real boofhead!”