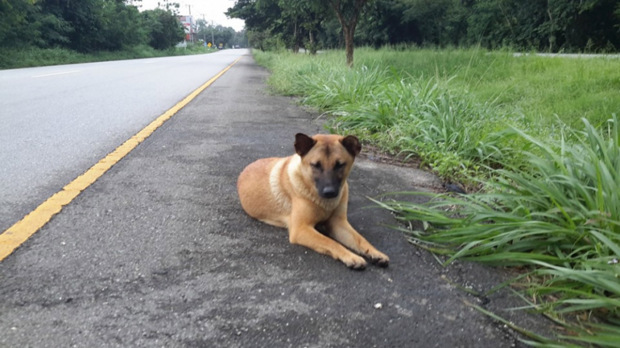 A lost dog in Thailand who kept up a determined year-long vigil after becoming separated from her owner has died after being struck by a car.

In 2015, Loung fell from a pick-up truck on the Sukhumvit Road, a major route between Thailand and Cambodia. In the hope that her owner would return for her, Loung stayed in the same spot, waiting patiently by the side of the road. It is thought her owner didn’t notice she was missing right away, and therefore wouldn’t know where to look for her following a journey that may have stretched over hundreds of miles.

Residents of a nearby village kept Loung fed and looked after, but she refused to be taken in. She even became something of a local celebrity, with people sharing photographs and stories about her online. But after 12 months of dedicated waiting, Loung was hit by a car, and lost her life, according to a report from the Bangkok Post.

To commemorate her incredible devotion to her owner, Loung will receive a proper burial in the Tha Mai district, paid for by a dog lovers club.