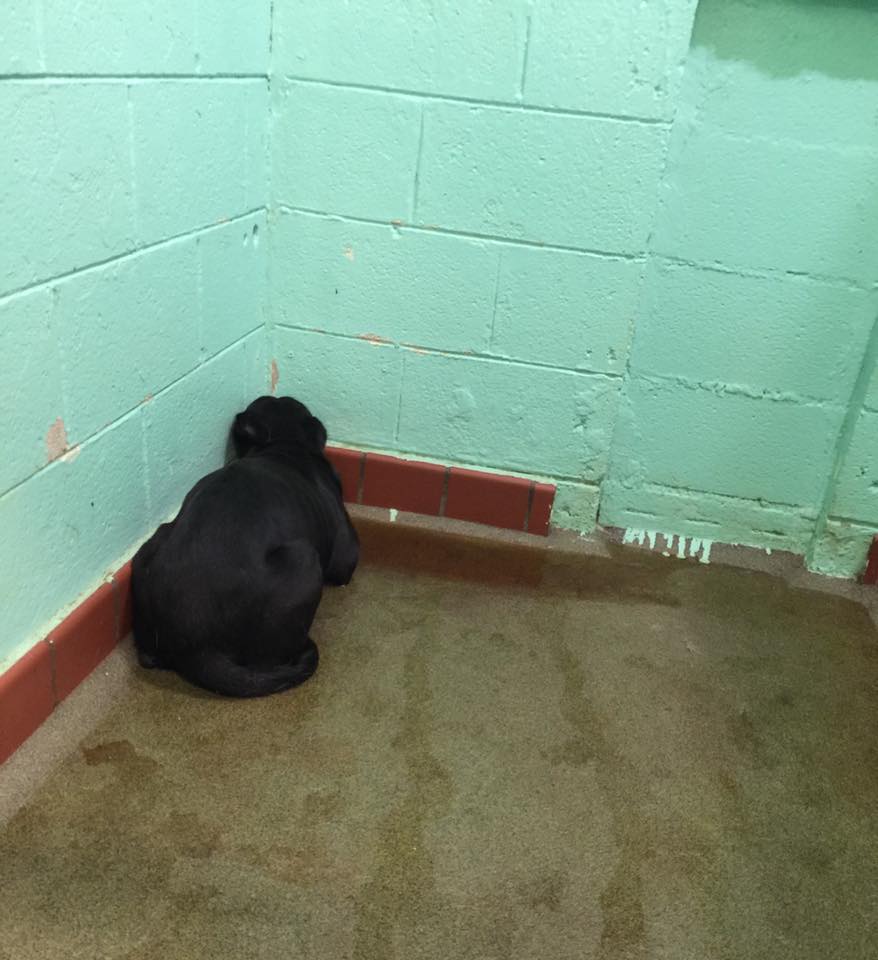 This dog was a pitiful sight; abandoned at a shelter in North Carolina in the USA, the Labrador-Pit Bull cross was so scared, she spent all her time huddled in one corner facing the wall. She wouldn’t eat. At first, no one even knew if she was a boy or a girl.

Tammy Graves, a dog rescuer behind the Haley Graves Foundation, snapped this heart-wrenching photograph, and shared it on Facebook, in a post that has now been shared over 125,000 times.

She wrote, “Today I went to the shelter to take photos for Lab Rescue of three Labs needing rescue. Yes three! And as I walked past a kennel I saw this.

“This is what happens when people bring their dog to a shelter and leave them. This guy yesterday morning woke up happy on a couch or in a warm bed, waiting to be fed, hopped in the car thinking he was going to the park or if it was a bad day he was going to the vet. Instead he went to a place where there are 275 dogs barking to be freed, it smells like death, and doors are banging shut all the time. Animals walk by and never return. And he has no idea his fate. All he knows is he didn’t ask to be here. He didn’t even ask to be born to irresponsible owners. But today he lays frozen in fear, in a puddle of his own urine. Afraid to move, afraid to make eye contact, thinking just maybe he can fade away into this wall. Because if he does no one will see him and just maybe he can escape whatever fate waits for him. This is the reality of irresponsible pet ownership and the shelter system. This is not a shelter issue, this is not a rescue issue. This is irresponsible pet ownership.”

But the next day, we got an update. June Cash, as she was named, was saved. Tammy just had to go back for her. After some encouragement to walk on a lead, June was out the door, to her new life.

“She’s now laying her head in certain people’s laps, and she will lick your hand but she won’t let you watch what she eats. It’s going to take her a little bit of time,” Tammy told Yahoo News. “There are fabulous dogs in shelters who just want a home. They didn’t do anything wrong.”

She added, “[We have received] hundreds of messages and Facebook posts about adopting her. We have received around 20 actual applications for her. We encourage those who are not able to see her in North Carolina to check with their local shelter. There is a June Cash in every shelter in America.”

It just goes to show you shouldn’t walk by the scared or shy dogs hiding in corners when you visit rescue centres. It can be an extremely stressful environment; one that doesn’t show off a dog’s wonderful, kind heart at all.