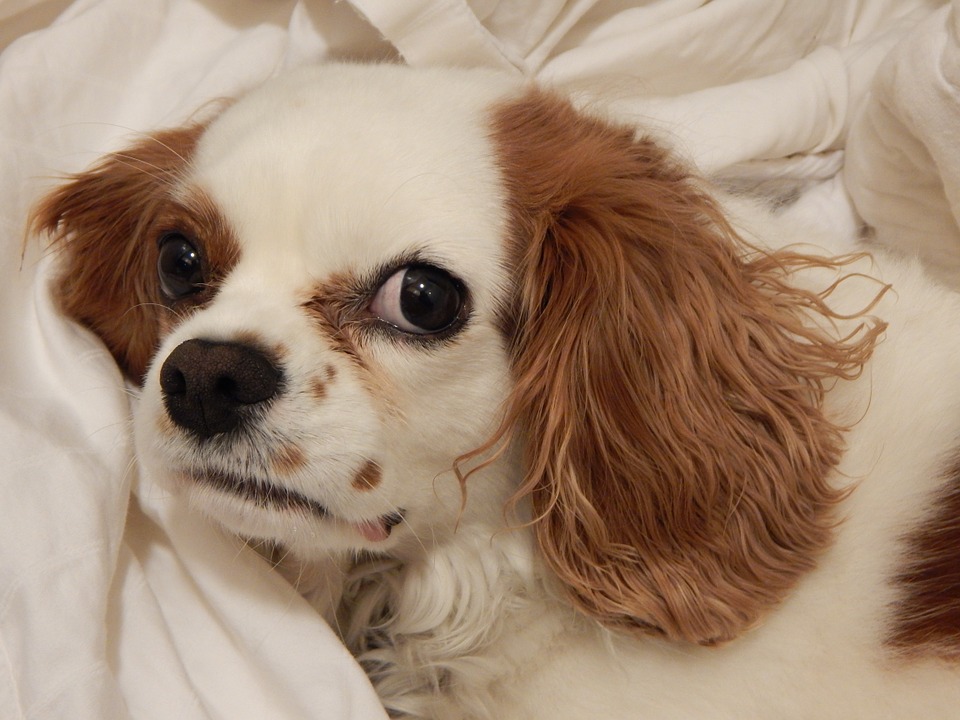 New statistics from the Royal Veterinary College’s VetCompass project has highlighted how one in 60 Cavalier King Charles Spaniels suffers from Syringomyelia (SM), compared to just one in 2000 of the rest of our dog population. This means that almost 2000 Cavaliers are currently affected by this hideously painful condition in the UK alone. It can be characterised by fluid-filled cavities called ‘syrinxes’ within the spinal cord, which cause not only pain, but neurological problems too. Syringomyelia is linked to Chiari-like Malformation (CM), when the dog’s skull is essentially too small for the brain. CM/SM, as the pairing is known, is common in miniaturised and short-nosed breeds – and the Cavalier is both. Breeding for a dainty little head has resulted in some horrifying side effects. It cannot really be comprehended just how agonising Syringomyelia can be. The study recorded how affected dogs would often cry or yelp when handled, or when their necks were touched. ‘Phantom scratching’ was also noted, whereby the dog desperately claws at the neck without actually touching the skin – known as ‘playing air guitar’. Painkillers and other management plans can today make a huge difference to these dogs, but early diagnosis is crucial.

Dr Dan O’Neill from the Royal College says, “Such can be the severity of SM that if even one dog gets recognised as being a case and receives some treatment that helps in any way to improve its life, then I will sleep easy for one night.”

Charlotte Mackaness, who owns Beebee, above, told us, “Speaking as a Cavalier health campaigner and owner of a dog badly affected by CM/SM I am really heartened to see the weight of the RVC and VetCompass being put behind raising awareness of this deeply distressing condition. Many of us have known for a long time that its prevalence is far greater than statistics often suggest because of lack of understanding and knowledge of the symptoms. SM affects Cavaliers of ALL breeding, from puppy-farmed dogs to those from the most ‘illustrious’ show lines, and I really hope this brilliant initiative will help those suffering in silence receive the diagnosis and medication to help ease their pain. However, looking at the bigger picture it’s important to remember that pain relief doesn’t always help and the most effective way of dealing with SM would be to reduce the incidence with more breeders MRI scanning.”

The YouTube video below shows a young Cavalier King Charles Spaniel trying to cope with the pain of CM/SM, by rubbing the side of his neck on the floor and air scratching with his back legs. It’s quite upsetting to watch.

Charlotte is a member of the Dog Breeding Reform Group (DBRG), which campaigns for greater regulation in dog breeding, including a requirement for health testing and breeder awareness of the need for genetic diversity.

Charlotte told us, “There is an official BVA/KC Canine Health Scheme for CM/SM that all breeders of Cavaliers should use before breeding. However, as of 31 August this year, only 370 Cavalier scans had been submitted through the scheme. The DBRG is disappointed that the majority of Cavalier breeders do not make use of the CM/SM Scheme or the SM Breeding Protocol that accompanies it. Until they do, the incidence of CM/SM among Cavaliers will remain high.”

It’s a sad story for one of Britain’s most adored breeds.