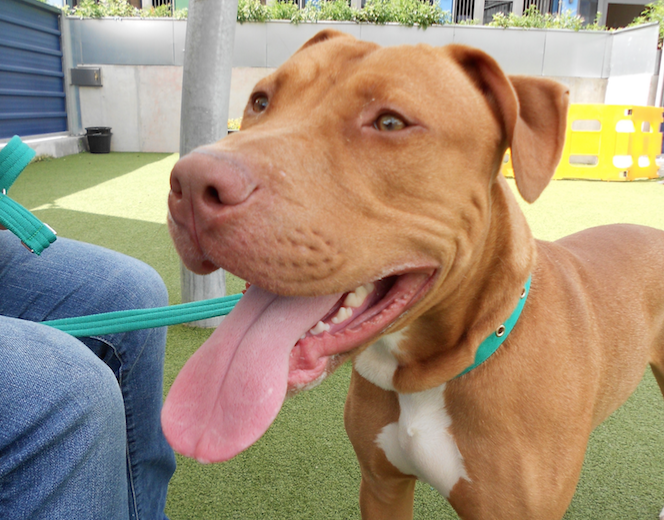 Many dog owners will have the chance to plan their friend’s final day on Earth. The endless cuddles, the treats previously held back given in fistfuls, that last final slow wander around the block… But for most dogs, euthanasia is the sweet relief, the end of an illness at a grand old age. The end of wobbly legs, of failing vision, of pain.

Today, Monday 25 July, is Francis’s last full day. He will be put to sleep tomorrow, but not because it is the best option for him, but because it is the best option, supposedly, for us. Francis is a Pit Bull and that’s why he has to die. Under our breed specific legislation, Francis is deemed to be a danger to society. But he doesn’t bite or fight, and his temperament is rather lovely. Instead he has been let down by his measurements. His shoulders are too broad, his face too boxy. He fits the type. And that’s enough.

Francis is in the care of Battersea Dogs and Cats Home, after he was found roaming as a stray in London, and the staff’s hands are tied. Because he doesn’t have an owner, Francis is not eligible to be exempted from destruction. There is no one to muzzle or insure him, to always walk him on a lead, to comply with every key detail to keep him alive. But find one, I hear you cry! That’s not an option either, sadly – Pit Bulls, as well as our other banned breeds, cannot change hands. Francis exists in No Man’s Land.

And so, this is the end. As Francis spends his final hours with all the love in the world, he will become yet another innocent life taken by this antiquated, cruel and unjust law, joining many others killed over twenty-five years. All the while, our bite statistics steadily increase.

Rest in peace, Francis. I’m sorry we failed you. Battersea Dogs and Cats Home took in 91 dogs in the last year that were deemed to be Pit Bulls. Despite staff believing the vast majority could have been happily rehomed as family pets because of their personalities, all were put to sleep on the basis of their looks.

Update, 28/07/2016: Battersea Dogs and Cats Home have confirmed today that Francis was put to sleep. The charity is urging people to write to their MPs about repealing our breed specific legislation.