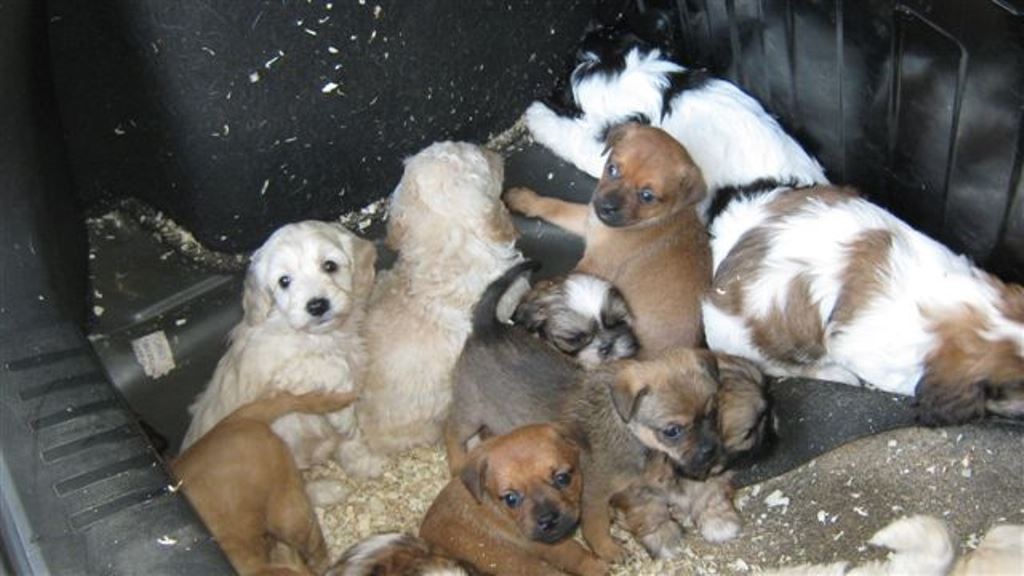 The ISPCA is looking for homes for twenty puppies that smugglers recently tried to take into Scotland. The tiny stowaways were discovered loose in the boot of a car at Cairnryan ferry port following as investigation by Operation Delphin by the Scottish SPCA, which aims to target this illegal trade. All of the puppies were deemed to be too young to travel, with some as young as four weeks old, away from their mothers far, far too early. None had the correct paperwork or were microchipped to an approved database.

The puppies, all fashionable small breeds including Shih Tzus, Cocker Spaniels, Pugs, Cavalier King Charles Spaniels and Bichon Frises, were swiftly taken back to Ireland, where they were transferred to the care of the ISPCA’s National Animal Centre in Longford. Some of the puppies are now having to be handfed by staff as they are so young.

All these puppies would have been purchased from large scale puppy farms in Ireland, with the hope of selling them on at a substantial margin to British families. Puppy farmers and dealers will always put profit first, compromising on welfare and circumventing legislation to keep the money coming in.

An undercover Inspector for the Scottish SPCA said, “Unfortunately the puppy trade is big business in Scotland, with thousands of dogs being brought into the country each year, from Northern Ireland and the Republic of Ireland in particular. We are working in partnership with a number of organisations and agencies including the ISPCA to execute Operation Delphin, an operation set up as part of the fight against those involved in this criminal activity.”

The Inspector continued, “In the case of the puppies being smuggled into Scotland in the boot of a car, we were able to get these poor animals signed over to the ISPCA who can now find them loving new homes. The Scottish SPCA will continue to act on information received to identify those operating in this cruel business and we have seized many dogs and reported a number of people to the Procurator Fiscal since Operation Delphin began. Anyone with concerns about the puppy trading industry in Scotland can call the Scottish SPCA’s animal helpline on 03000 999 999. Information is received in strict confidence and can be left anonymously.”